From Wikipedia, the free encyclopedia
King of Spain

Ferdinand VI of Spain ( Spanish: Fernando VI; 23 September 1713 – 10 August 1759), called the Learned (el Prudente) and the Just (el Justo), King of Spain from 9 July 1746 until his death in 1759, was the third ruler of the Spanish Bourbon dynasty. He was the third son of the previous monarch Philip V and his first wife Maria Luisa of Savoy. 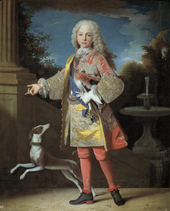 Aged 10 as an Infante, by Jean Ranc

Born at the Royal Alcázar of Madrid, Ferdinand endured a lonely childhood. His stepmother, the domineering Elisabeth Farnese, had no affection except for her own children, and looked upon Ferdinand as an obstacle to their fortunes. The hypochondria of his father left Elisabeth mistress of the palace. [1]

Ferdinand was by temperament melancholic, shy and distrustful of his own abilities. When complimented on his shooting, he replied, "It would be hard if there were not something I could do." Shooting and music were his only pleasures, and he was the generous patron of the famous singer Farinelli, whose voice soothed his melancholy. [1]

Ferdinand was married in 1729 to Infanta Barbara of Portugal, daughter of John V of Portugal and Maria Anna of Austria. [1]

Beginning of the reign

When he came to the throne, Spain found itself in the War of the Austrian Succession, which ended without any benefit to Spain. He started his reign by eliminating the influence of the widow Queen Elisabeth of Parma and her group of Italian courtiers. As king he followed a steady policy of neutrality in the conflict between France and Britain and refused to be tempted by the offers of either into declaring war on the other. [1]

Prominent figures during his reign were Marquis of Ensenada, a Francophile; and José de Carvajal y Lancáster, a supporter of the alliance with Great Britain. The fight between both ended in 1754 with the death of Carvajal and the fall of Ensenada, after which Ricardo Wall became the most powerful advisor to the monarch.

The Projects of Ensenada

The most important tasks during the reign of Ferdinand VI were carried out by the Marquis of Ensenada, the Secretary of the Treasury, Navy and Indies. He suggested that the state help modernize the country. To him, this was necessary to maintain a position of exterior strength so that France and Great Britain would consider Spain as an ally without supposing Spain's renunciation of its claim to Gibraltar.

Among his reform projects were:

During the War of the Austrian Succession and the Seven Years' War, Spain reinforced its military might.

The main conflict was its confrontation with Portugal over the colony of Sacramento, from which British contraband was transferred down the Río de la Plata. In 1750 José de Carvajal helped Spain and Portugal strike a deal. Portugal agreed to renounce the colony and its claim to free navigation down the Río de la Plata. In return, Spain ceded to Portugal two regions on the Brazilian border, one in the Amazon and the other to the south, in which were seven of the thirty Jesuit Guaraní towns. The Spanish had to expel the missionaries, generating a conflict with the Guaraní people that lasted eleven years.

The conflict over the towns provoked a crisis in the Spanish Court. Ensenada, favorable to the Jesuits, and Father Rávago, confessor of the King and members of the Society of Jesus, were fired, accused of hindering the agreements with Portugal.

The death of his wife Barbara, who had been devoted to him, and who carefully abstained from political intrigue, broke his heart. Between the date of her death in August 1758 and his own on 10 August 1759, he fell into a state of prostration in which he would not even dress, but wandered unshaven, unwashed and in a nightgown about his park. The memoirs of the count of Fernán Núñez give a shocking picture of his deathbed. [1] As the couple had no children, Ferdinand VI of Spain was succeeded as King by his half-brother Charles III.

A fictionalized version of Ferdinand VI appears in the 2011 adventure film Pirates of the Caribbean: On Stranger Tides. In the film, after learning about the discovery of the Fountain of Youth, Ferdinand (portrayed by Sebastian Armesto) sends his most trusted agent, known only as "The Spaniard", to find and destroy the Fountain, because he saw it as the abomination in the eyes of God. Also, his residence, for unknown reasons, is situated in Cádiz, not in Madrid, the true capital of Spain.