The F Market & Wharves line is one of several light rail lines in San Francisco, California. Unlike most other lines in the system, the F line runs as a heritage streetcar service, almost exclusively using historic equipment both from San Francisco's retired fleet as well as from cities around the world (although buses are added during peak commute hours). While the F line is operated by the San Francisco Municipal Railway (Muni), its operation is supported by Market Street Railway, a nonprofit organization of streetcar enthusiasts which raises funds and helps to restore vintage streetcars.

Introduced as the F Market in 1983, in the first San Francisco Historic Trolley Festival, the service originally operated between the Castro District and the Transbay Terminal, continuing to do so after being launched as a full-time, year-round service in 1995. [2] In March 2000, it was extended at its eastern end to the Embarcadero and northwards along that street to Fisherman's Wharf, and a short section of the route between Market Street and the Transbay Terminal was discontinued. [3]

Cable car operations along Market Street began in 1888. Service was electrified in 1906. [4]

In 1915, the San Francisco Municipal Railway started the F-Stockton route, which ran from Laguna (later Scott) and Chestnut Streets in the Marina down Stockton Street to 4th and Market Streets near Union Square, later extended to the Southern Pacific Depot (currently the Caltrain Depot) in 1947. The streetcar line was discontinued in 1951 and was replaced by the 30-Stockton route, which still runs today.

The F-line designation was therefore available for use by the current line, although that service is over a completely different route from the F-line of 1915 to 1951.

Market Street is a major transit artery for the city of San Francisco, and has carried in turn horse-drawn streetcars, cable cars and electric streetcars. In the 1960s construction began on the Market Street subway, which would carry BART's trains on its lower level. All streetcar lines currently operating in the subway previously ran on the surface of Market Street, and were eventually diverted into the upper level of the tunnel. This diversion, together with the provision of new light rail cars, resulted in today's Muni Metro system.

The diversion of the Market Street streetcar lines into tunnel and the replacement of the existing streetcars with new light rail cars was completed by November 1982. However, the street trackage on Market Street was retained, and many of the old streetcars were still in storage.

Porto car 122 on Market Street in 1983, during the first Historic Trolley Festival

In 1982, San Francisco's cable car lines were shut down for almost two years to allow for a major rebuild. Temporary weekend historic streetcar service started on July 3, 1982 as part of 4th of July celebrations and ran until September of that year. [4] To provide a more regular alternative tourist attraction during this period, the San Francisco Historic Trolley Festivals began in 1983. [5] [4] These summertime operations of vintage streetcars on Market Street were a joint project of the San Francisco Chamber of Commerce and Muni. [5]

The trolley festival route went from the Transbay Terminal at First and Mission Streets to Market, then up the retained Market Street tracks to Duboce Avenue. From there, it followed a 'temporary' streetcar detour built in the 1970s to bypass subway construction under Market: Duboce, Church Street, and 17th Street to Castro. 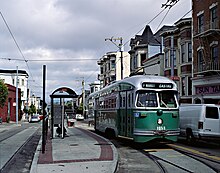 The Trolley Festival proved so successful it was repeated every year until 1987. In that year, preparation began for the introduction of a permanent F line. After that year's festival finished, Muni replaced the old Market Street tracks with new ones, restoring tracks to upper Market Street and recreating a line to Castro. Different types of vintage streetcars were evaluated to provide the backbone of the F-line fleet, resulting in the decision to use the PCC car, due in part to its historic San Francisco transit use. Fourteen such cars were acquired second-hand from Philadelphia to add to three of Muni's own retired double-ended PCCs.[ citation needed]

On September 1, 1995, the F line opened [6] [7] with a parade of PCC cars, painted to represent some of the two dozen North American cities that this type of streetcar once served. Ridership exceeded expectations and the 8-Market was finally completely discontinued on December 29, 1995. [4] At that point in history, this was a rare instance in which a streetcar replaced a bus line in operation, rather than the other way around. The need for extra cars resulted in the acquisition of ten Peter Witt-style cars then just being retired in the city of Milan, Italy. These cars were built in the 1920s to a design once common in North American cities, and their sister cars are still widely used on the Milan tramway network.

Extension on the Embarcadero 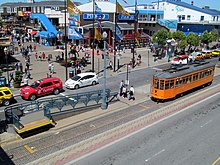 The Embarcadero is the eastern waterfront roadway of San Francisco, along San Francisco Bay. At one time busy with port and ferry related traffic, it fell into decline as freight transferred to the container terminals of Oakland and the Bay Bridge replaced the ferries. In the 1960s the elevated Embarcadero Freeway was built above, dividing the city from the bay, but was condemned and demolished after the 1989 Loma Prieta earthquake. Proposals for streetcar service along The Embarcadero were put forward as early as 1974, [8] and historic streetcar service along The Embarcadero was first provided during the 1987 Trolley Festival, using existing Belt Railroad tracks on The Embarcadero and towed diesel generators to provide power. [9]

With increasing development of the waterfront for leisure and tourist activities, and the existence of Fisherman's Wharf and Pier 39 at its northern end, it was decided to rebuild the Embarcadero as a tree-lined boulevard complete with a streetcar reservation. The section north of Market Street was to be served by an extension of the F line. Tracks were extended on the northern end of Market to connect with the Embarcadero tracks. On March 4, 2000, service on the F line began operating along the new extension to Fisherman's Wharf, [10] replacing bus route 32. [3] [11] Service on the short section of the F line between Market Street and the Transbay Terminal was discontinued at that time. [3] The last F-line trip departed from the Transbay Terminal at 12:55 a.m. on the night of March 3, [11] and the track was abandoned in August 2000, the final use being a "farewell" trip by 1916-built work car C1 on August 18, [12] with track removal beginning soon afterwards. [13]

A month after the opening of the extension, Muni dedicated a car to Herb Caen, the noted columnist for the San Francisco Chronicle perhaps most famous for coining the phrase Baghdad by the Bay to describe The City. The car, Streetcar No. 130, which was originally delivered in 1914, contains wood paneling and is decorated with many quotes from Caen. [14] [15]

The Better Market Street project, a streetscape project launched in the late 2000s to improve Market Street, has a transit component that aims to improve the operations of the F Line. The project would consolidate and eliminate some stops on Market Street and would also construct a new turn-around loop for the F Line at McAllister and 7th Streets. [16] The loop would allow increased service between Fisherman's Wharf and the Civic Center area, which is the section of the line with the highest ridership. Average headways under the service improvement would be 5 minutes instead of the current 7.5 minute scheduled headways. [17] The project is undergoing environmental review with construction projected to begin in 2020. [16] 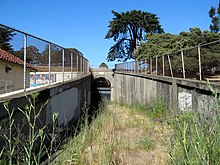 Muni completed a technical feasibility study to extend the F-Line from the vicinity of the existing Jones Street terminal with the assistance of the National Park Service in December 2004. The extended line would extend westward alongside the San Francisco Maritime Museum and Aquatic Park and then through the historic (1914) but disused single-track Fort Mason Tunnel, formerly owned by the State Belt Railroad.

An Environmental Impact Statement (EIS) for the extension, again led by the National Park Service, commenced in May 2006, [18] resulting in:

The final document classified areas west of the Fort Mason Tunnel as having "inadequate regional transit access...limited transportation options for transit-dependent residents...[and] infrastructure constraints impacting effectiveness and operations of Fort Mason Center." The Final EIS named a double-tracked extension along Beach Street, a jog north to Aquatic Park, then across Van Ness Avenue to single-tracked service through a retrofitted Fort Mason Tunnel and to a terminus in the Fort Mason Center parking lot as the "preferred alternative". [22]

Muni owns a large selection of equipment for use on the F line, although not all of them are in service at the same time. The car fleet includes four sub-fleets: PCC streetcars, Peter Witt streetcars, pre-PCC veteran streetcars from San Francisco, and a diverse collection of 10 streetcars and trams from various overseas operators. [23]

The line is principally operated by a mixture of the PCC and Peter Witt cars, although other more unusual or historic cars are often in service (including the 913 and 952, iconic streetcars named Desire). The modern LRVs used by Muni Metro cannot be used on F Market & Wharves tracks because the overhead line is not compatible with pantograph operation (though the older streetcars can operate on most surface sections of the Muni Metro system).

A fleet of PCC streetcars from San Francisco, Philadelphia, and Newark, built between 1946 and 1948, operate on the line. As of August 2007 [update], MUNI was operating 27 of these cars, restored to various states of service. Among the restored cars in service, three are original San Francisco double-ended PCC cars. Another 16 cars are single-ended cars acquired from SEPTA in Philadelphia in 1992 (which continues to operate another 18 cars today, retrofitted for ADA compliance), while the remaining 11 cars are single-ended cars acquired from New Jersey Transit in Newark in 2002. [24]

Many of the restored cars are painted in the color schemes of prominent past and present PCC streetcar operators, including Muni itself and other transit systems. [24] 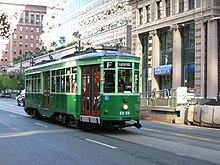 Muni operates a fleet of Peter Witt streetcars on the line, acquired from Milan, Italy. There are 11 of these cars, all built in 1928 to an Italian derivative of a common streetcar design that operated in many US cities, although never previously in San Francisco. [26]

Most of San Francisco's Peter Witt cars are currently painted in the overall orange color scheme that they carried in Milan, although one has been repainted into its original livery of yellow and white with black trim, while another is in the two-tone green livery that the cars carried from the 1930s to the 1970s. [26]

Veteran San Francisco streetcar 130 was built for Muni in 1914, and operates in the livery it carried in 1939.

The F-Line fleet also includes a fleet of pre-PCC vintage cars built between 1895 and 1924 for use in San Francisco. Three passenger cars were built for Muni itself, and a further two for the independent Market Street Railway Company that ran competing streetcar services in San Francisco until acquired by Muni in 1944. The final car is a works flat car, built for Muni in 1916 and used for hauling rails, ties, and other materials needed to maintain a streetcar system. [27] 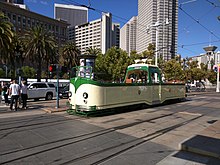 The Muni's international fleet on the F-Line includes a diverse collection of 10 cars from various operators worldwide: [27]

All the cars carry the color schemes of their original operators, except for the Brussels car, which currently carries a color scheme paying tribute to San Francisco's twin city of Zürich in Switzerland (the streetcars actually in use in Zürich use meter-gauge and therefore cannot be moved to San Francisco). The Moscow trams had to be equipped with 4 ft 8 1⁄2 in (1,435 mm) trucks.[ citation needed]