From Wikipedia, the free encyclopedia
This article is about the band. For the album, see Eyes Set to Kill (album).

Eyes Set to Kill is an American post-hardcore/ metalcore band from Phoenix, Arizona. [15] The Rodriguez sisters, lead guitarist Alexia (born November 23, 1987) and bassist Anissa (born January 27, 1989), [16] along with vocalist Lindsey Vogt started the band in 2003. Lindsey Vogt departed the band in mid-2007 due to issues with management. Lindsey would go on to form a solo project known as "The Taro Sound", and eventually form the band "The Attraction." After Lindsey's departure, Alexia assumed her position as lead vocalist as well as guitarist. Anissa left in late 2016. [15]

The World Outside received widespread critical acclaim and the group was featured on the cover of USA Today, as one of Alternative Press Magazine's "100 Bands You Need To Know", and hosted an episode of MTV's Headbangers Ball. [17] Broken Frames was ranked fifth on the list of "Locals Only: The Best Albums and EPs in 2010". [18]

Eyes Set to Kill began in 2003 as a three-piece band from Tempe, Arizona. Alexia Rodriguez (lead guitar, backing vocals), Anissa Rodriguez (bass), and Lindsey Vogt (lead vocals); their name derived from a line out of a poem Rodriguez wrote in secondary school. Over the next several months the band continued to undergo changes in their lineup. In early 2006 Alex Torres (rhythm guitar), Corey Pattakos (backing vocals), and Caleb Clifton (drums) joined recorded a ten-song EP, When Silence Is Broken, the Night Is Torn, at Larry Elyea's Glendale, Arizona home studio: Mind's Eye Digital Recording Studios. The EP featured guitarist Alex Torres and original vocalist, Lindsey Vogt and sold 11,000 units. Their debut full-length album, Reach, was released February 19, 2008, peaked at No. 29 on the Billboard Heatseekers chart and No. 77 on Billboard's Independent Music charts in 2008 selling 1,900 copies in its first week. [19]. The first single from the album was "Reach", with their following single as "Darling".

Their third studio album, Broken Frames, was released on June 8, 2010. Its first single, "All You Ever Knew", was released on April 1, 2010 on revolvermag.com and on their MySpace page. Brandon Anderson resigned from the band in early July. [23]

On June 7, 2015, the band announced they started their own record label, Foresee Records, [13] and would no longer be with Breaksilence Records. They released White Lotus through a joint venture between their own label Foresee Records and Maphia Entertainment on August 9. [26] They embarked on a tour with Falling in Reverse and For All Those Sleeping throughout September and October 2011. [27]

On July 10, they announced that they were forced to cancel an Oklahoma City show due a health issue with Rodriguez. [30] In September 2015, they were support for New Years Day on their "Other Side Tour" North American Tour. [31]

In March 2016 the band announced a co-headliner tour named "The Visions Tour" with Texas-based band One-Eyed Doll and Open Your Eyes as support. To promote the tour, Eyes Set to Kill and One-Eyed Doll recorded a cover of Depeche Mode's "Enjoy the Silence". [32] 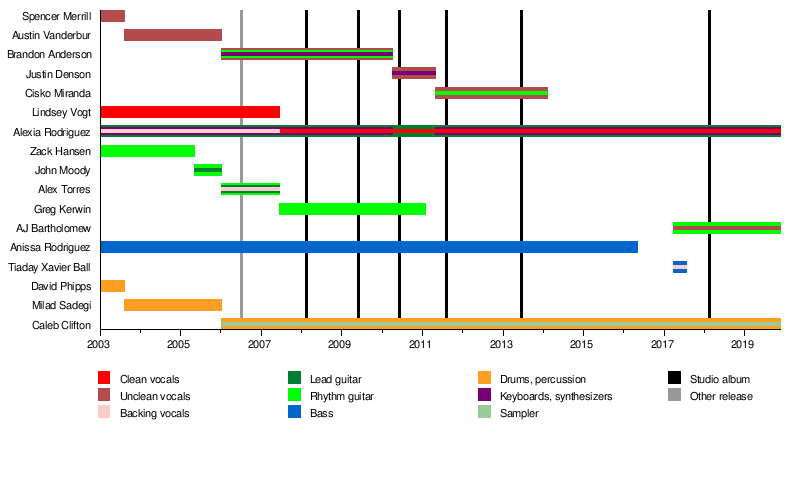