From Wikipedia, the free encyclopedia
For other uses, see Evansville (disambiguation).
City in Wisconsin, United States

Evansville was first settled in the 1830s by New Englanders who were attracted to the area by its pristine wooded landscape and the placid Allen Creek. By 1855, the city recorded its first plat and was complete with homes, shops, and churches. Evansville is named for Dr. John M. Evans, a doctor and postmaster during the city's early years. [6]

In 1863, the Chicago and North Western Railway came to Evansville, accelerating growth. At this point, Evansville's economy was based on industry and manufacturing of carriages, wagons, pumps, windmills and iron castings. The economy was also based on agriculture: dairying; farming (production of wheat and tobacco); and stock raising.

By the turn of the twentieth century Evansville had over 1900 residents, and by the 1920s, most of the buildings in Evansville's future Historic District were completed.

On November 11, 1918, Armistice Day activities celebrating the end of World War I took an ugly turn as some Evansville citizens began rounding up townspeople who they had deemed insufficiently supportive of the war, mainly due to their refusal or inability to buy war bonds. A German minister and his wife were apprehended on their way out of town before being brought downtown and forced to kiss the American flag. Other " slackers" were made to wear sleighbells as they rode atop a car's radiator, while others were forced to dance in a snake formation around a bonfire. A 73-year-old woman who passed on participating in the "Your Share is Fair" war bond campaign was dragged from her home by the mob, placed in a large animal cage and paraded about the streets before being parked before the fire. The woman, Mary J. Shaw, had previously bought bonds and supported the Red Cross and other war relief efforts. After refusing to salute or kiss the flag she was rescued by other citizens. Her attempts to see her assailants punished were brushed aside by the local sheriff, and testimony before the state legislature was similarly disregarded. [8] 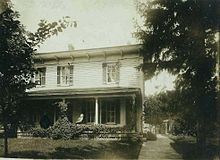 The Evansville Historic District, which surrounds Main Street and stretches to the side streets of Garfield Avenue and Liberty Street, includes dozens of historic homes and other structures. The Wisconsin Historical Society called Evansville home to "the finest collection of 1840s to 1915 architecture of any small town in Wisconsin." [9]

The Eager Free Public Library building was built with the bequest of a leading citizen, Almeron Eager, in 1908. Designed by the architectural firm of Claude and Starck of Madison, Wisconsin in the Prairie style, it features stained glass windows and plaster friezes just below the overhanging roof line. A 1994 addition at the rear of the original building was designed to match the original architecture, while adding much needed space and handicapped accessibility. [10] The intersection on which the library stands also contains a Greek Revival home (now a funeral parlor), a High Victorian Gothic brick home (now housing the local Masonic Temple) and a classic Victorian "Painted Lady" home, still a private residence.

The Evansville Seminary was located near College Drive in the district. Its building was designed by architect August Kutzbock,[ citation needed] but now functions as apartment homes. [11]

In 1978, the historic district was placed on the National Register of Historic Places. [12]

This 18-acre (73,000 m2) lake was formed by damming Allen Creek in the 1840s as a mill pond. Because of erosion into Allen Creek from upstream farm fields and the resulting silt deposits that accumulated, Lake Leota had become shallower over the years, reaching an average depth of only one and a half feet by 2000. One major issue that faced the city in the last 30 years was how to restore the lake to its original depth. The dam was opened in September 2005 to allow the lake to drain and its bottom to dry out. There was some controversy in Evansville over the cost of dredging, so a referendum was put to the city's voters in November 2008. It passed by almost two to one, and dredging to a maximum of ten-foot depth was completed in February 2009. The dam was closed shortly thereafter, and Lake Leota was refilled slowly. A ceremony to mark the renaissance of the lake was held on July 4, 2009. Citizens can now enjoy the natural beauty of the lake, boating in non-powered craft, and fishing. Since refilling, the lake has been stocked with panfish and bass, and "fish-cribs" sunk below the lake surface to provide breeding areas and cover for small fry.

There were 1,942 households of which 40.6% had children under the age of 18 living with them, 51.0% were married couples living together, 10.9% had a female householder with no husband present, 5.3% had a male householder with no wife present, and 32.9% were non-families. 27.4% of all households were made up of individuals and 10.3% had someone living alone who was 65 years of age or older. The average household size was 2.54 and the average family size was 3.12.

There were 1,563 households out of which 38.5% had children under the age of 18 living with them, 52.1% were married couples living together, 10.9% had a female householder with no husband present, and 33.1% were non-families. 27.7% of all households were made up of individuals and 11.5% had someone living alone who was 65 years of age or older. The average household size was 2.51 and the average family size was 3.08.

Evansville has four gas stations, several banks, a full-sized grocery store, and several specialty shops and restaurants. Over the last two decades, many of the downtown buildings have been renovated in the style in which they were originally built. In addition, in 2008, three blocks of Main Street that had been covered with asphalt in the 1960s were re-paved with 1900-era paving bricks, adding to the "old time" feel of Main Street. The re-paving took place when major utility improvements were made to the city's downtown infrastructure.

The community has a large central park, Leonard-Leota Park, named in part after early settler Levi Leonard. The park contains Lake Leota, which has fishing, boating, and swimming. Park amenities include a baseball diamond with night lighting, a softball diamond, two tennis courts, a basketball court, a swimming pool, picnic shelters, and playgrounds. A skateboard facility was installed in 2006. In addition, there are several smaller community parks, among them Countryside, Franklin, and Brzezinski. In 2008, a new large park was opened on Evansville's west side to accommodate the new subdivisions being built there. The development of this park will take place over a number of years, but two full-size soccer fields and a children's playground are in place. Plans include baseball diamonds, basketball courts and picnic shelters.

The major employers in Evansville are: Baker Manufacturing Company, a pump and well maker; Stoughton Trailers, which builds semi-trailer chassis; Varco-Pruden, which manufactures prefab metal buildings; and Evansville Manor, a nursing home. Evansville has one home-town bank that has been in business in Evansville for over 100 years.

Some tracks of the former Chicago & North Western railway remain. The terminal had included multiple spur, classification, and industrial tracks, but after 1996, when the line was sold to Union Pacific railway, nearly all rail facilities in town were removed. The line, which at a point in time carried 70 mph-plus speeds, was left in a state of disrepair . The Evansville Depot, built in 1910 (replacing the older wooden depot) was unmanned by 1970 and renovated for use as the local Legion VFW Post 6905 .

On April 4, 2006, Evansville voters participated in two referenda, one to urge a pullout of U.S. troops from Iraq, and the second to gauge whether voters supported "our honorable President's leadership" against "the unfathomable wickedness of the forces of terror". The first was approved and the second rejected. Although other Wisconsin communities held similar referenda, Evansville was the only one with two opposing referenda.[ citation needed]

One of the early newspapers of Evansville was the "Badger" published by Marilla Andrews & Co. Established by Marilla and sister, Eleanora Andrews in 1894 and ended 1906. It was published every Saturday and subscription rate was $1.00 yearly. The 13"x 20" 8 page republican based newspaper had a weekly circulation of 300. [16] Other early newspapers included, "Enterprise", "Evansville Review" and "Tribune". [17]

WWHG (105.9 FM), a mainstream rock-formatted radio station with its studios in Janesville and serving the areas of Janesville and Madison, is licensed to Evansville.

Evansville was featured on the Wisconsin tourism show, Discover Wisconsin, in February 2017.