Ethiopian Americans are Americans of Ethiopian descent, as well as individuals of American and Ethiopian ancestry.

In 1919, an official Ethiopian goodwill mission was sent to the United States to congratulate the Allied powers on their victory during the First World War. [6] The four-person delegation included Dejazmach Nadew, the nephew of Empress Zawditu and Commander of the Imperial Army, along with Blattengeta Heruy Welde Sellase, Mayor of Addis Ababa, Kentiba Gebru, Mayor of Gondar, and Ato Sinkas, Dejazmach Nadew's secretary. 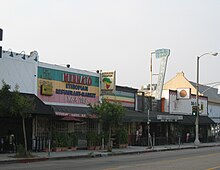 After his official coronation, Emperor Haile Selassie sent forth the first wave of Ethiopian students to continue their education abroad. Almost a dozen Ethiopian students likewise went to the United States. They included Makonnen Desta, who studied anthropology at Harvard, and later became an interim Ethiopian Minister of Education; Makonnen Haile, who studied finance at Cornell; and Ingida Yohannes, veterinary medicine at New York University. Three other students - Melaku Beyen, Besha Worrid Hapte Wold, and Worku Gobena - went to Muskingum, a missionary college in Ohio, two of them later transferring to Ohio State University. Melaku Beyan, who was one of the two who attended Ohio State, later received his medical degree at Howard Medical School in Washington, D. C. 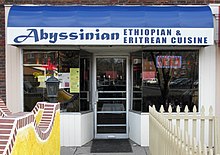 An Ethiopian restaurant in Hartford, Connecticut.

Overall, approximately 20,000 Ethiopians moved to the West to achieve higher education and conduct diplomatic missions from 1941 to 1974 under the Selassie's rule. [7] However, the net movement of permanent immigrants remained low during this period as most temporary immigrants ultimately returned to Ethiopia with a Western education to near assured political success, while the relative stability of the country determined that few Ethiopians would be granted asylum in the United States. [7]

The passing of the 1965 Immigration Act, the Refugee Act of 1980, as well as the Diversity Visa Program of the Immigration Act of 1990, contributed to an increased emigration from Ethiopia to the United States, [8] prompted by political unrest during the Ethiopian Civil War. The majority of Ethiopian immigrants arrived later in the 1990s, following the Eritrean–Ethiopian War. Immigration to the U.S. from Ethiopia during this 1992-2002 period averaged around 5,000 individuals per year. [9]

Since the 1990s, around 1000 Hebrew speaking, Ethiopian Jewish Israelis have settled in the US, with around half of the Ethiopian Israeli community living in New York. [4]

Ethiopian Americans have since established ethnic enclaves in various places around the country, particularly in the Washington D. C., and Minneapolis areas. Fairfax Avenue in Los Angeles, California, has also come to be known as Little Ethiopia, owing to its many Ethiopian businesses and restaurants, as well as a significant concentration of residents of Ethiopian and Eritrean ancestry. [10] 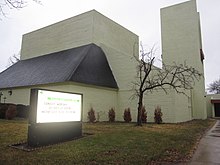 Many Ethiopian Americans are followers of Abrahamic religions, particularly Christianity and Islam. Of these, the majority of Christians belong to the Ethiopian Orthodox Tewahedo Church. It is the largest Christian denomination in Ethiopia. [8] Most Muslim Ethiopian expatriates adhere to the Sunni school. Other Ethiopian immigrants follow the P'ent'ay denomination and Judaism. There has been a general religious revival among Ethiopian Americans, especially in the Orthodox sect. Church attendance in America has also increased relative to that in Ethiopia, [15] and the institutions serve to preserve aspects of Ethiopian culture among American-born Ethiopians. They also act as networks and support systems crucial to the well-being of both recent immigrants from Ethiopia and more established Ethiopian residents. Ethiopian churches in the US are gathering places for the Ethiopian community, where Ethiopian expatriates come together to pray, socialize, stay in touch, and lend support to one another. [8]

For many individuals living within the Ethiopian diaspora, musical performance acts as a uniting social force that allows Ethiopian immigrants in the US to explore their shared culture and identity, while simultaneously partaking in political expression and advocacy. [16] Through public performances (e.g. cultural events on college campuses), these traditions are shown to communities of outsiders who are interested in Ethiopian music and dance within an American context. [16] Such folkloric performances, often based in religion, feature sacred songs performed in various languages of Ethiopia, with instrumental accompaniments and traditional choreographed dances. [16] 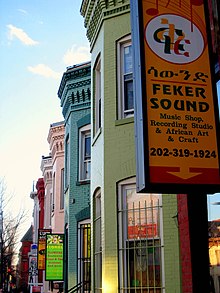 Embassy of the Federal Democratic Republic of Ethiopia in Washington, D.C..

By far, the largest concentration of Ethiopians in the United States are found in Washington, D.C. and the local metro area. Some conservative estimates put the number at around 75,000 residents, while other figures go up to 250,000. [17] The Ethiopian Community Center was opened in 1980 to serve the area's Ethiopian residents. [18] Ethiopian businessmen have also helped revitalize the Shaw and U Street vicinities. Although they mainly live in other parts of the capital, these entrepreneurs purchased old residential property, which they then renovated and converted into new office spaces, restaurants and cafes. [19] Additionally, Ethiopian businessmen in the District of Columbia own various parking garages, taxi firms, social establishments, grocery stores, and travel agencies. [20]

As of 2012, there were 4,610 Ethiopia-born persons in the New York-Northern New Jersey- Long Island metropolitan area. [5] 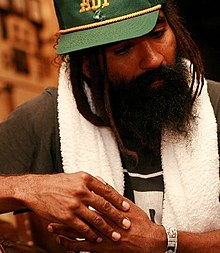 An estimated 25,000 - 40,000 Ethiopians live in Seattle, Washington, [23] with many having come as refugees. The first Ethiopian organization in Seattle, the Ethiopian Refugee Association, was started in 1983 and continues today under the name Ethiopian Community Mutual Association. [24] The Seattle area is also home to three Amharic language radio programs, as well as an Amharic newspaper and radio program. Many Ethiopians live in the neighborhoods of Rainier Beach and the Central District, and Ethiopian restaurants are a fixture of the city's cuisine.

Around 4,600 Ethiopian residents were officially registered in the North Texas area. However, DFW International estimates that the Ethiopian community is much larger, with about 30,000 members. [25]

The Ethiopian population in Minnesota is one of the most diverse, with a large representation of Amhara and Oromo Ethiopians. The official census shows 13,927 Ethiopian-Americans living in Minnesota, [17] while MPR estimates that 40,000 ethnic Oromos live in the state alongside many Somali Americans. [26]

There are also approximately 25,000 Ethiopians residing in the Columbus metropolitan area in Ohio. [27]