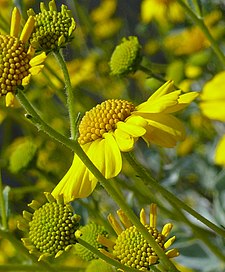 The common name "brittlebush" comes from the brittleness of its stems. Other names include hierba del vaso ( Spanish) and cotx ( Seri). [4] Another Spanish name for it is incienso because the dried sap was burned by early Spanish missions in the New World as incense.

E. farinosa can be found in a variety of habitats from dry, gravelly slopes to open, sandy washes up to 1,000 m (3,300 ft). It requires a very sunny position in a deep very well-drained soil, and minimal winter frost. [5]

It does well in cultivation often being used for border, erosion control, ground cover and massing. [6] Recently the plant has spread dramatically in areas not natural to its distribution in large part because Caltrans has begun to use it in hydroseeding.[ citation needed]

Brittlebush grows up to 30 to 150 cm (12 to 59 in) tall, [7] with fragrant leaves 3–8 centimetres (1.2–3.1 in) long, ovate to deltoid, and silvery tomentose. The capitula are 3.0–3.5 cm in diameter, with orange-yellow ray florets and yellow or purple-brown disc florets. They are arranged in loose panicles above the leafy stems fruit 3–6 mm and no pappus is visible. [1] During dry seasons the plant goes drought deciduous, shedding all of its foliage, relying on the water stored in its thick stems. [5]

3-Acetyl-6-methoxybenzaldehyde is found in the leaves of E. farinosa. [8]

Two varieties of E. farinosa are recognized by Flora of North America. [1]

Brittlebush has a long history of uses by indigenous and pioneer peoples. 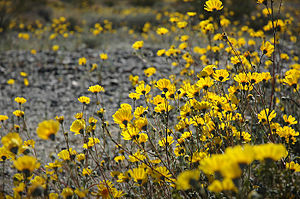