From Wikipedia, the free encyclopedia
(Redirected from Embarcadero Freeway)
Former highway in California

State Route 480 (SR 480) was a state highway in San Francisco, California, United States, consisting of the elevated double-decker Embarcadero Freeway (also known as the Embarcadero Skyway), the partly elevated Doyle Drive approach to the Golden Gate Bridge and the proposed and unbuilt section in between. The unbuilt section from Doyle Drive to Van Ness Avenue was to have been called the Golden Gate Freeway and the Embarcadero Freeway as originally planned would have extended from Van Ness along the north side of Bay Street and then along the Embarcadero to the San Francisco-Oakland Bay Bridge.

The Embarcadero Freeway, which had only been constructed from Broadway along the Embarcadero to the Bay Bridge, was demolished after the 1989 Loma Prieta earthquake, and Doyle Drive is now part of U.S. Route 101. SR 480 was Interstate 480 (I-480), an auxiliary route of the Interstate Highway System, from 1955 to 1965. [1] [2] The entire route was removed in 1991, approximately two years after the earthquake. [1] 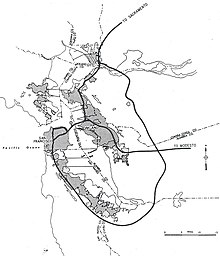 The original 1955 plan was to extend the Central Freeway as a double decked structure between Van Ness Avenue and Polk Street north to Clay Street, then as a single deck depressed freeway north to Broadway, where it would have tunneled under Russian Hill to connect with I-480.

The first section of the Embarcadero Freeway, from the Bay Bridge approach ( I-80) north to Broadway, opened in 1959 [7] (the Clay Street and Washington Street ramps opened around 1965).[ citation needed] The freeway revolt caused the San Francisco Board of Supervisors to pass Resolution 45–59 in January 1959, opposing certain freeways, including the remainder of I-480. [8] The freeway revolt continued after a new freeway plan was proposed in 1964, with a major protest on May 17, 1964—200,000 people rallied in Golden Gate Park against any more new freeways. Poet Kenneth Rexroth spoke at the rally (among others), and folk singer Malvina Reynolds sang (she was most famous for her song " Little Boxes", attacking urban sprawl, which she sang at the anti-freeway rally). [9]

In the 1964 renumbering, Route 480 was designated for the full route of I-480, including the US 101 concurrency. The route was deleted from the Interstate Highway System in January 1968, and I-280 was rerouted north of Daly City at the same time. The short piece of former I-480 from the junction with new I-280 (previously SR 87) south to the Bay Bridge approach became part of I-280 (to allow I-280 to meet I-80), now named the Southern Embarcadero Freeway. [6] These changes were made to the state highway system in 1968; Route 480 was truncated only slightly, with the 5.47 miles (8.80 km) [12] from I-280 to SR 1 remaining, though downgraded to SR 480; this extension of I-280 south (the Junipero Serra Freeway) is considered the southern terminus of Junipero Serra Boulevard. [8] 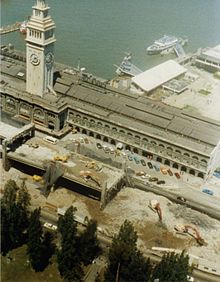 In the 1980s, opposition to the Embarcadero Freeway resurfaced in proposals to tear it down (which was first proposed in 1963). On November 5, 1985, the San Francisco Board of Supervisors voted to tear down the Embarcadero Freeway. [7] The proposal was put to the voters in 1987 and soundly defeated, opposed in particular by influential Chinatown community organizer Rose Pak, who feared that Chinatown would suffer catastrophic consequences if it lost this fast crosstown connection. [13] [14] The October 1989 Loma Prieta earthquake significantly damaged the structure, causing it to be closed to traffic. The California Department of Transportation (Caltrans) planned to retrofit and retain the double-decker freeway. Various groups in and outside the city supported the Caltrans plan, but there was a significant opinion within the city in favor of removing the freeway structure. Then-Mayor Art Agnos proposed demolishing the freeway in favor of a boulevard with an underpass at the Ferry Building to allow for a large plaza. [15]

Opposition to demolishing the freeway mounted again, with over 20,000 signatures gathered to again create a ballot measure. [15] Prior to the earthquake, the Embarcadero Freeway carried approximately 70,000 vehicles daily in the vicinity of the Ferry Building. Another 40,000 vehicles per day used associated ramps at Main and Beale streets. The strongest opposition came from Chinatown and other neighborhoods north of downtown. [16] Merchants in Chinatown had suffered a dramatic decline in business in the months immediately following the earthquake and feared that if the freeway was not reopened they would not recover. [17]

Agnos continued to negotiate with federal and state officials to win enough funding to make the demolition practical, and the opposition relented. Agnos argued that the city would squander "the opportunity of a lifetime" if it allowed the freeway to remain. [16] After months of debate, the Board of Supervisors narrowly voted in favor of demolition by a 6–5 margin. [15] Demolition began on February 27, 1991. [18] That year, Agnos was defeated for re-election as Chinatown switched its support away from him.

Meanwhile, the state legislature deleted SR 480 from the state's Streets and Highway Code. [1] The northwest section was transferred to US 101. [8] The only piece of the Embarcadero Freeway to remain was the beginning of the ramp from the Bay Bridge to Fremont Street, including a short ramp stub that formerly carried traffic to the freeway (I-280 after 1968). This part was rebuilt as part of the Bay Bridge retrofit project. (I-280 was never finished to that interchange, though its legislative definition still takes it there. [19]) In 2003, Caltrans began work on a retrofitting project to replace the western approach to the Bay Bridge. This retrofitting was part of a larger, $6-billion project to upgrade the aging Bay Bridge to modern earthquake standards, which included replacing the entire eastern span. In late 2005, Caltrans began the demolition of the original western approach after traffic was routed onto a temporary bypass structure. The western approach to the Bay Bridge was completed in 2009; the entire project was completed in 2013. As a result of this retrofitting project, all old parts of the approach have been replaced, removing the last traces of the Embarcadero Freeway. [20]

Along the waterfront, the former freeway was replaced with a wide, palm-lined boulevard with San Francisco Municipal Railway tracks in the median. [16] The E Embarcadero and F Market & Wharves heritage streetcar lines and N Judah and T Third Street light rail lines were extended to run along the Embarcadero. Sue Bierman Park replaced offramps just north of the Embarcadero Center, [21] and Ferry Plaza was constructed in front of the San Francisco Ferry Building, which itself was remodeled into an upscale gourmet marketplace in 2003. Other new parks include Pier 14 Public Pier, [22] Rincon Park near Folsom Street, [23] and the Brannan Street Wharf. [24] A former onramp at Broadway and Sansome streets was redeveloped into 75 low-income housing units. [25]

Along the north side of Folsom Street between Essex and Spear streets, former freeway right-of-way was transferred to the City of San Francisco and included in the Transbay Redevelopment Plan, which calls for the development of over 2,500 new homes, 3 million square feet (280×10^3 m2) of new office and commercial space, and 100,000 square feet (9,300 m2) of retail. [26] [16] The demolition of the freeway and redevelopment of the Embarcadero has been cited by urban planners from jurisdictions around the world studying freeway removal projects, including Seattle, [27] Massachusetts, [28] and Toronto. [29]

[The Embarcadero Freeway] cut off the downtown from the water that gave birth to it, and it left the iconic Ferry Building – a statuesque survivor of the 1906 – stranded behind a dark wall of car exhaust and noise. Oppressive does not begin to describe it... Take a walk today on the 2 1/2-mile promenade between Fisherman's Wharf on the north and China Basin on the south, and it's hard to believe that an elevated freeway ever scarred the open air. [16]

On June 16, 2006, the Port of San Francisco unveiled a monument at Pier 14 to Mayor Agnos honoring his vision, noting: "This pedestrian pier commemorates the achievement of Mayor Agnos in leaving our city better and stronger than he found it." [22] [30]

The Embarcadero Freeway was featured in several films, including Magnum Force, Freebie and the Bean, Bullitt, Serial, Superman IV: The Quest for Peace, The Lineup, Time After Time, Innerspace, and Koyaanisqatsi. On television, the freeway was seen in such shows as Full House (in several overhead screen shots) and The Streets of San Francisco. In 1985, four years before its destruction, James Bond (played for the last time by Roger Moore) drove along the freeway in A View to a Kill as he followed his ally Stacey Sutton ( Tanya Roberts) during his quest to eliminate the villainous Max Zorin ( Christopher Walken). [31] For a sequence at the beginning of the 2007 film Zodiac, which takes place in the late 1960s and early 1970s, the now-demolished freeway was digitally added behind a shot of the Ferry Building.

In the 1993 NBC made-for-TV movie Miracle on Interstate 880, the Embarcadero Freeway, which was being demolished at the time, was used in place of the Cypress Street Viaduct in Oakland, California. The film focuses on the survival of three victims who survived the collapse of the similarly designed two-level I-880 freeway during the 1989 Loma Prieta earthquake. [32]

In the science fiction alternative-history novel The Man in the High Castle by Philip K. Dick, the sight of the Embarcadero Freeway deeply rattles a character who has apparently stumbled into a different reality. 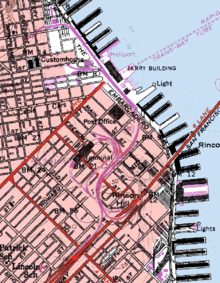 Map of the Embarcadero Freeway (purple)

The following is an exit list of the former Embarcadero Freeway prior to the Loma Prieta earthquake and subsequent demolition.

The entire route was in San Francisco.