Ellicott Rock Wilderness is named for “ Ellicott's Rock,” a rock on the east bank of the Chattooga Wild and Scenic River on which surveyor Major Andrew Ellicott chiseled a mark in 1811 to determine the border between Georgia and North Carolina. Major Ellicott, a well-respected, sought-after surveyor, astronomer, and mathematician, was hired by the state of Georgia to ground-truth the 35th parallel and settle a border dispute between Georgia and North Carolina. The task proved long and arduous, saw difficult terrain, and the location was not accessible by horse. On December 26 with severe weather and limited food, Major Ellicott calculated the 35th parallel and inscribed the letters "N-G" on a rock along the Chattooga Wild and Scenic River. This put the Georgia-North Carolina border approximately 18 miles south of what Georgia claimed at the time. Due to Georgia's unfavorable results, Major Ellicott went unpaid for over a year and was ultimately paid a tiny fraction of the salary promised. Two years later, a group of commissioners representing both North and South Carolina set out to verify the location of Ellicott's Rock. The commissioners carved a second rock (approximately 10 feet north of Ellicott's Rock) with the inscription "Lat 35 AD 1813 NC + SC" to mark where the North Carolina and South Carolina state lines joined together. This second rock is commonly referred to as Ellicott's Rock though more accurately it is named Commissioner's Rock. Commissioner's Rock was listed in the National Register of Historic Places on July 24, 1973. [1] 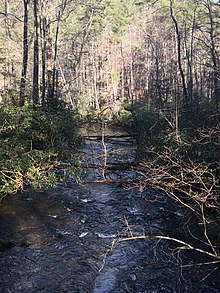 Ellicott Rock Wilderness is located in the southern tip of the Blue Ridge Mountains, a sub-mountain range of the Appalachian Mountains. It has a temperate climate with an average rainfall of 80 inches per year creating a dense forest with steep, rugged terrain. Embedded throughout the wilderness landscape are a variety of hardwood trees (creating breathtaking scenes come fall), white pines, and hemlocks with bountiful water sources including a couple waterfalls. One popular waterfall, Spoonauger Falls, is located on the Chattooga River Trail, a short quarter-mile hike from the trailhead located on Burrell's Ford road. The Wilderness is home to Glade Mountain of Georgia standing at an elevation of 3,672-foot (1,119 m) and Fork Mountain of South Carolina at an elevation of 3,294-foot (1,004 m). The watershed surrounding the Chattooga Wild and Scenic River is one of the most biologically diverse in the country. The wonderful array of sights, sounds, and smells of the wild flora and fauna bring Ellicott Rock Wilderness to life. 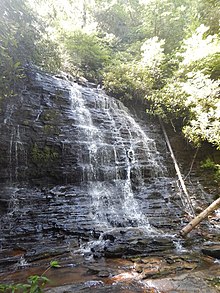 A variety of recreation occurs in Ellicott Rock Wilderness including hiking, camping, backpacking, fishing, hunting, kayaking, and orienteering. The Wilderness supports approximately 18 miles of designated terrestrial trails. South Carolina trails include Chattooga River Trail, East Fork Trail, Foothills Connector Trail, and a majority of the Fork Mountain Trail. North Carolina has one trail, Ellicott Rock Trail, with two trailheads along Bull Creek Road and a big river crossing in the middle. Georgia does not maintain any trails. While there are no officially designated campsites in Ellicott Rock Wilderness yet, many unofficial campsites occur along the trails, particularly along the Chattooga River trail. Unofficial campsites are primitive with no amenities.

The wilderness embodies many examples of life in the Appalachian Mountains pre-civilization and provides a wonderful escape to millions from the accustomed hustle and bustle of city life. 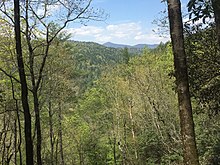 View of Ellicott Rock Wilderness along the Foothills Connector Trail 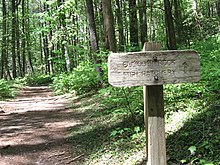 Ellicott Rock Wilderness is part of the 110 million acre National Wilderness Preservation System. This system of wild federal land is designated by Congress and protected under the Wilderness Act of 1964. Wilderness land consist of some of the most wild, undisturbed places in the United States. Wilderness has five special characteristics: untrammeled, natural, undeveloped, opportunities for solitude and primitive recreation, and other features of value. Wilderness often has less recreational amenities and more restrictions and prohibitions.