From Wikipedia, the free encyclopedia
American information technology company
This article is about the original Electronic Data Systems. For the successor corporate entity, see DXC Technology.

Electronic Data Systems (EDS) was founded in 1962 by H. Ross Perot, a graduate of the United States Naval Academy and a successful IBM salesman who firsthand observed how inefficiently IBM's customers typically were using their expensive systems. Somewhat to IBM's chagrin, since the company sold as many computers as possible, Perot made a fortune changing this. An early success was in matching the unused computer time at Southwestern Life Insurance Company with the computing needs of rapidly expanding Collins Radio, both located in Dallas, Texas. Perot knew the inside details of both companies. [1]

In its early years, EDS was a pioneer in facilities management (becoming the IT department for many companies) as well as beginning to service banks and provide early support for both Medicaid and Medicare in its home state of Texas. [2] Leading the effort internally was Morton H. Meyerson, who joined the company in 1966 as the company's 54th employee. In 1967, he proposed the business model that eventually became known as " outsourcing" [3] and which led to exponential growth for EDS.

In the 1970s, EDS expanded initially into more insurance services and later credit unions, and by 1975 revenue topped $100 million and the company began bidding for work internationally. In 1978 EDS expanded into financial markets with the arrival of automated teller machines, electronic funds transfers and real-time point-of-sale terminals. Meyerson was named president in 1979, at which point EDS had revenue of $270 million, was free of debt, and had 8,000 employees.

In the 1980s, they expanded into travel services supporting payment services between travel agents and airlines represented by the Air Transport Association of America and provided large scale contracts for the US military.

In 1984, the company was acquired by General Motors for $2.5 billion, with EDS becoming a wholly owned subsidiary of GM. Meyerson remained president and in 1985, the company had a presence in 21 countries with 40,000 employees. Meyerson retired in 1987. During his years of executive leadership, EDS revenue grew to $4 billion a year, and the company grew to 45,000 employees. By the end of the decade, revenue was $5 billion. In 1996, GM spun off EDS as an independent company. [4]

In the 1990s, in addition to its existing markets, EDS was entering the telecommunications industry and was providing IT systems in many foreign countries. They were providing information systems for global sporting events including the 1992 Barcelona Olympics, the 1994 FIFA World Cup, and the 1998 FIFA World Cup. In 1994, they signed what was at the time the largest information technology contract with Xerox for $3.2 billion and also bought the New Zealand banking processing company Databank Systems. In 1995 they purchased A.T. Kearney, the world's 4th largest private management consulting firm. In 1996, they became an independent company again and relisted on the New York Stock Exchange. Before the turn of the century they took part in over 1,300 Year 2000 projects.

In 2000, EDS launched a new logo with an award-winning Super Bowl commercial about herding cats. [5] Post-2000, they continued to sign long term, billion dollar contracts with organizations such as Bank of America, American Airlines, General Motors, Kraft Foods and the United States Navy. In 2006 they sold A.T. Kearney in a management buyout.

On May 13, 2008, Hewlett-Packard Co. confirmed that it had reached a deal with EDS to acquire the company for $13.9 billion. [6] The deal was completed on August 26, 2008. EDS became an HP business unit and was temporarily renamed "EDS, an HP company". Ronald A. Rittenmeyer, EDS Chairman, President, and CEO, remained at the helm and reported to HP CEO Mark Hurd until his retirement. [7] In December 2008, HP announced that Rittenmeyer would retire at the end of the month. [8]

As of 2008, EDS employed 300,000 people in 64 countries, the largest locations being the United States, India and the UK. It was ranked as one of the largest service companies on the Fortune 500 list with around 2,000 clients.

As of 23 September 2009, EDS began going to market as HP Enterprise Services, a name change which came one year after HP announced the acquisition of EDS, and which was a critical milestone as the integration of EDS into HP neared completion. [9]

On April 3, 2017, Hewlett Packard Enterprise Services merged with Computer Sciences Corporation to form DXC Technology. Retaining significant operations from Plano, Texas and many aspects of EDS. On June 1, 2018, DXC spun off the U.S. public services sector of the business through a Reverse Morris Trust, combining with Vencore and KeyPoint Government Solutions to create a new independent and publicly traded government contractor, Perspecta. 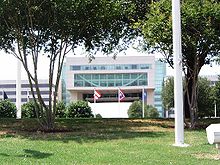 EDS in Tower 500 at the Renaissance Center in Detroit, Michigan

In June 2006, EDS acquired a majority holding in MphasiS, a leading applications and business process outsourcing (BPO) services company based in Bangalore, India.

In March 2007, EDS acquired RelQ Ltd, a testing company based in Bangalore, India.

In November 2007, EDS announced that it had agreed to purchase an approximate 93 percent equity interest in Saber Corp., a leading provider of software and services to U.S. state governments, from various sellers, including majority shareholder Accel-KKR, for approximately $420 million in cash. Saber became Saber Government Solutions after merging with other EDS state and local non-healthcare groups. In January 2009, it rebranded as EDS, an HP company.

In May 2008, HP and EDS announced that they had signed a definitive agreement under which HP would purchase EDS at a price of $25.00 per share, or an enterprise value of approximately $13.9 billion. The terms of the transaction were unanimously approved by the HP and EDS boards of directors. The transaction closed on 26 August 2008. The companies' collective services businesses, as of the end of each company's 2007 fiscal year, had annual revenues of more than $38 billion and 210,000 employees, doing business in more than 80 countries.

In September 2009, HP purchased Lecroix Systems and incorporated it into the infrastructure of EDS to facilitate both in-house and client network security needs.

For 2006, $9.6 billion of revenue came from the Americas (Canada, Latin America, and the United States); $6.4 billion from Europe, Middle East, and Africa; $1.5 billion from Asia-Pacific; Services' revenue was: Infrastructure $12 billion, Applications Software $5.9 billion, Business Process Outsourcing $3 billion and all other $421 million.

EDS announced the expansion of its SAP consulting practice: [12]

By collaborating with SAP on client engagement training and techniques that will drive the long-term growth of its consulting practice, EDS will further enhance its existing SAP capabilities and bring end-to-end SAP consulting and systems integration to the market by early 2008. Additionally, EDS will work closely with SAP's Global Partner and Ecosystem Group for market penetration and value-added customer offerings.

EDS's Plano, Texas campus is located about 20 miles (30 km) north of downtown Dallas. The campus consists of 3,521,000 square feet (327,000 m²) of office and data center space on 270 acres (1.1 km²) of land. The campus included four Tier-IV data centers, a command center, four clusters of office buildings, a fitness center, a service station, four helipads and a hangar. It is the center of the 2,665 acre (11 km²) Legacy in Plano [14] real estate development, which EDS built.

EDS signed a sponsorship agreement in 2007 with Nobel Media to become a Global Sponsor of the Nobel Prize Series, and with Nobel Web to become its Global Technology Services Partner. The three-year agreement enables EDS to apply its technology expertise for the benefit of the Nobel Prize Series and the organization's Web technologies, including supporting the development of content on nobelprize.org, Nobel's award-winning website.

EDS cataloged its services into three service portfolios; Infrastructure, Applications, and Business Process Outsourcing. [15] Infrastructure services includes maintaining the operation of part or all of a client's computer and communications infrastructure, such as networks, mainframes, " midrange" and Web servers, desktops and Laptops, and printers. Applications services involves the developing, integrating, and/or maintaining of applications software for clients. Business process outsourcing includes performing a business function for a client, like payroll, call centers, insurance claims processing, and so forth.

EDS established a number of Business alliances [16] with other companies through its global alliance program. The company has three types of alliances: Agility Alliances, Solution Alliances, and Technology Alliances.

Most of EDS's clients were very large companies and governments that need services from a company of EDS's scale. EDS's largest clients included Rolls-Royce plc, General Motors, Bank of America, Arcandor, Kraft, United States Navy, the UK Ministry of Defence and Royal Dutch Shell although General Motors announced plans to move 90% of its IT work back in house over the next 3 to 5 years starting in 2012. [17]

EDS formed the National Heritage Insurance Company in 1996. The creation of this subsidiary is to manage Medicare Part B services on behalf of the Centers for Medicare and Medicaid Services (CMS), formerly the Health Care Financing Administration (HCFA). NHIC handles call center, claims processing and payment, fraud investigations, physician enrollment etc. in many states of the US.

Another large EDS client is the United States Navy. In 2000, they won a contract for the creation of a US$9 billion Intranet linking the Navy and the Marine Corps, which was set to late 2006, but on March 24, 2006, was extended to 2010, adding $3 billion to the accumulated contract worth. This initiative is known as the Navy Marine Corps Intranet, or simply NMCI. In 2004, NMCI accounted for about 4% of EDS's revenue. NMCI has been called the largest private network in the world, with approximately 400,000 "seats". EDS provided the network, desktops, laptops, servers, telephones, video-conferencing, satellite transceivers, and overall management of the intranet. [18]

Following on to the NMCI type of services, EDS in March 2005 won a US$4 billion contract with the UK Ministry of Defence [19] to "consolidate numerous existing information networks into a single next-generation infrastructure ... The network will provide seamless interaction between headquarters, battlefield support and the front line, linking about 150,000 desktop terminals and 340,000 users in approximately 2,000 locations ..."

In February 2008 EDS signed a US$1.3 billion contract with the Infocomm Development Authority of Singapore, one of the largest IT projects ever undertaken in Asia. This agreement will help the Singapore government achieve a standard desktop, network and messaging/collaboration environment across its public sector by the end of fiscal year 2010. [20]

In October 2008, the U.S. Defense Information Systems Agency (DISA) signed a US$111 million contract with EDS. Under this contract, EDS will: conduct worldwide security reviews, deliver certification and accreditation support, provide independent evaluation of United States Department of Defense security policies, and conduct security assessments on DOD operating systems, applications, databases, and networks. DOD and EDS have had a 13-year relationship of providing DISA with a wide range of infrastructure services, hardware and software through the DISA I-Assure and Encore contract vehicles. [21]

Of historical significance, just prior to the overthrow of the Shah of Iran, EDS was the IT company that developed the Iranian social security information system. During the 1979 overthrow, several EDS employees were detained by the transitioning government of Iran, causing H. Ross Perot to undertake extraordinary clandestine measures to get these employees out of Iran. [22] These events were recounted in Ken Follett's book On Wings of Eagles.