Government of the District of Columbia

The Mayor of the District of Columbia is the head of the executive branch. The Mayor has the duty to enforce city laws, and the power to either approve or veto bills passed by the Council. In addition, the Mayor oversees all city services, public property, police and fire protection, most public agencies, and the District of Columbia Public Schools. [1] The mayor's office oversees an annual city budget of $8.8 billion. [2]

The Council of the District of Columbia is the legislative branch. Each of the city's eight wards elects a single member of the council and residents elect four at-large members to represent the District as a whole. The council chair is also elected at-large. [3]

There are 37 Advisory Neighborhood Commissions (ANCs) elected by small neighborhood districts. ANCs can issue recommendations on all issues that affect residents; government agencies take their advice under careful consideration. [4]

The Attorney General of the District of Columbia is the chief legal officer of the District. Following numerous election delays after D.C. voters approved a charter amendment in 2010 to make the office an elected position, white-collar attorney Karl Racine was elected in 2014 and sworn in in January 2015. Previously, the post was appointed by the Mayor.

The Superior Court of the District of Columbia is the local trial court. It hears cases involving criminal and civil law. The court also handles specialized cases in the following areas: family court, landlord and tenant, probate, tax, and traffic offenses. The Court consists of a chief judge and 61 associate judges. The Court is assisted by the service of 24 magistrate judges, as well as retired judges who have been recommended and approved as senior judges. Judges are appointed to the court by the President of the United States, without any District (mayoral or council) input, and confirmed by the U.S. Senate for fifteen-year terms. [5]

The Superior Court is housed in the H. Carl Moultrie Courthouse.

The Court of Appeals is authorized to review all final orders, judgments, and specified interlocutory orders of the associate judges of the Superior Court, to review decisions of administrative agencies, boards, and commissions of the District government, and to answer questions of law presented by the Supreme Court of the United States, a United States court of appeals, or the highest appellate court of any state. The court consists of a chief judge and eight associate judges. The court is assisted by the service of retired judges who have been recommended and approved as senior judges. Despite being the District's local appellate court, judges are appointed by the President of the United States and confirmed by the U.S. Senate for 15-year terms. The DC Courts are a Federal agency, and do not answer to the District government. [5]

As of 2019, [update] there are 23 departments within the Government of the District of Columbia, Two of which are public safety agencies. [6] They are:

The Secretary of the District of Columbia is one of the officers of the government.

The District of Columbia Public Schools (DCPS) is the local public school system. The District of Columbia Public Charter School Board (PCSB) was created in 1996 as a second, independent authorizer of public charter schools. [7] The DC Council passed legislation in 2007 giving the DC Mayor direct authority over the DCPS and transferred the oversight responsibility for the charter schools previously authorized by the DC Board of Education to the PCSB. [7] 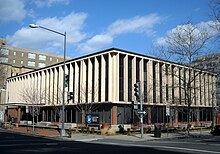 The District of Columbia Board of Elections (BOE) is the independent agency responsible for the administration of elections, ballot access and voter registration. The BOE consists of three active board members and an Executive Director.

The Alcoholic Beverage Control Board (ABRA) is an independent adjudicatory body responsible for overseeing the District's Alcoholic Beverage Regulation Administration and hiring its director, conducting investigations, the licensing process, handling complaints, keeping of records, and referral of evidence of criminal misconduct to the proper authorities. The Board is composed of seven members, appointed by the Mayor and confirmed by the Council of the District of Columbia, who serve four-year terms.

The mayor and council set local taxes and a budget, which must be approved by the Congress.

According to the District of Columbia's Department of Human Resources, 20% of the DC government workforce will be eligible for retirement in the year 2021. The DC government offers a host of internship opportunities for recent graduates seeking employment. [8] 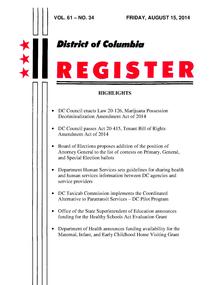 Front cover of the District of Columbia Register

The District observes all federal holidays and also celebrates Emancipation Day on April 16, which commemorates the end of slavery in the District. [10] The flag of the District of Columbia was adopted in 1938 and is a variation on George Washington's family coat of arms. [11]

"Politics of Washington D.C." redirects here. For nationwide politics, see Politics of the United States.
Further information: Elections in the District of Columbia and Political party strength in Washington, D.C.

The city's local government, particularly during the mayoralty of Marion Barry, was criticized for mismanagement and waste. [12] During his administration in 1989, The Washington Monthly magazine claimed that the District had "the worst city government in America." [13] In 1995, at the start of Barry's fourth term, Congress created the District of Columbia Financial Control Board to oversee all municipal spending. [14] The same legislation created a Chief Financial Officer position for the District, [15] which operates independently of the mayor and council. [16] Mayor Anthony Williams won election in 1998 and oversaw a period of urban renewal and budget surpluses. The District regained control over its finances in 2001 and the oversight board's operations were suspended. [17]

The Government Accountability Office and other analysts have estimated that the city's high percentage of tax-exempt property and the Congressional prohibition of commuter taxes create a structural deficit in the District's local budget of anywhere between $470 million and over $1 billion per year. Congress typically provides additional grants for federal programs such as Medicaid and the operation of the local justice system; however, analysts claim that the payments do not fully resolve the imbalance. [18] [19] 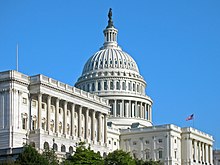 The United States Congress has ultimate authority over the District.

The District is not a U.S. state and therefore has no voting representation in the Congress. D.C. residents elect a non-voting delegate to the House of Representatives, currently Eleanor Holmes Norton (D- D.C. At-Large), who may sit on committees, participate in debate, and introduce legislation, but cannot vote on the House floor. The District has no official representation in the United States Senate. Neither chamber seats the District's elected "shadow" representative or senators. D.C. residents are subject to all U.S. federal taxes. [20] In the financial year 2012, D.C. residents and businesses paid $20.7 billion in federal taxes; more than the taxes collected from 19 states and the highest federal taxes per capita. [21]

A 2005 poll found that 78% of Americans did not know that residents of the District of Columbia have less representation in Congress than residents of the 50 states. [22] Efforts to raise awareness about the issue have included campaigns by grassroots organizations and featuring the city's unofficial motto, " Taxation Without Representation", on District of Columbia vehicle license plates. [23] There is evidence of nationwide approval for D.C. voting rights; various polls indicate that 61 to 82% of Americans believe that D.C. should have voting representation in Congress. [22] [24] Despite public support, attempts to grant the District voting representation, including the D.C. statehood movement and the proposed District of Columbia Voting Rights Amendment, have been unsuccessful.

Opponents of D.C. voting rights propose that the Founding Fathers never intended for District residents to have a vote in Congress since the Constitution makes clear that representation must come from the states. Those opposed to making D.C. a state claim that such a move would destroy the notion of a separate national capital and that statehood would unfairly grant Senate representation to a single city. [25] 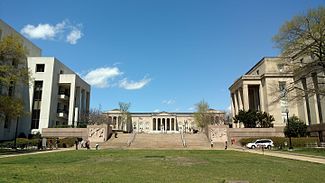 The District of Columbia Organic Act of 1801 is an organic act enacted by Congress in accordance with Article 1, Section 8 of the United States Constitution that formally placed the District of Columbia under the control of Congress and organized the unincorporated territory within the District into two counties: Washington County to the north and east of the Potomac River and Alexandria County to the west and south; left in place and made no change to the status of the charters of the existing cities of Georgetown and Alexandria; and established a court in each of the new counties, [26] with the common law of both Maryland and Virginia continuing to remain in force within the District. [27]