During World War II, the airport was a United States Army Air Forces training base. Units which trained at El Paso Army Airfield were:

On August 3, 1961, El Paso was the last stop of the first major US hijacking of a jetliner, a Boeing 707 owned by Continental Airlines. [4] 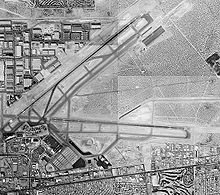 An expansion that tripled the size of the terminal occurred in 1971. A new structure for ticketing and bag claim was built in front of the old terminal and two passenger concourses were built behind the old terminal, retaining the old terminal in the middle, the outline of which can still be recognized today. [5] It was designed by Garland & Hilles. [6]

Standard Air Lines began the first scheduled commercial passenger and mail service to El Paso on February 4, 1928 with a route to Los Angeles making stops in Douglas, Tucson, and Phoenix, Arizona. The carrier began using a Fokker F-7 aircraft and soon upgraded to a Fokker F-10 trimotor. Maddux Air Lines soon followed beginning service on February 23, 1929 with nearly the same route as Standard Air Lines however Maddux continued on from Los Angeles to San Francisco. Maddux used a Ford trimotor aircraft but the service ended later in 1929 by the time of the great stock market crash. Western Air Express replaced Standard on the route to Los Angeles for a short time in 1930 and extended service eastward from El Paso to Dallas stopping at Midland, Abilene, and Fort Worth, Texas. American Airways then took over the route beginning on or about October 15, 1930 and later extended the route eastward all the way to New York stopping at Little Rock, Memphis, Nashville, and Washington D.C. as well as several other points. The carrier changed its name to American Airlines in 1934. Douglas DC-3 aircraft were primarily used in the latter 1930's through 1940's followed by Convair 240's and Douglas DC-6's in the 1950s. A new route to Monterrey and Mexico City, Mexico was flown from 1943 through 1957 and direct service to San Francisco was added in 1948. Through the 1950s, American partnered with Continental Airlines offering an interchange service where American's flights from Los Angeles and San Francisco, stopping in Phoenix, would continue eastward through El Paso as Continental's flights to San Antonio and Houston using the same Douglas DC-6 aircraft. The interchange flights ended in 1961 when American received its own authority to serve the El Paso-San Antonio-Houston route. American Boeing 707 and Boeing 727 jets began serving El Paso in the early 1960s and widebody Douglas DC-10 jets began service on nonstop flights to Dallas in 1972. The stop at Douglas, Arizona on westbound flights ended in the mid-1960's and new nonstop service to Chicago was added in 1969. Direct flights to San Antonio, Houston, Tucson, and San Francisco ended after airline deregulation in 1978 and American's service to Dallas, Chicago, Phoenix, and Los Angeles continues today.

Continental Airlines was the second major airline to serve El Paso. The carrier began as Varney Speed Lines in 1934 operating a route from El Paso to Pueblo, Colorado with stops at Albuquerque and several other points in New Mexico and Colorado. The name was changed to Continental Air Lines in 1937 and the route was extended to Denver. A new route to Carlsbad, Hobbs, and Roswell, New Mexico was added in 1940 followed by new routes to San Antonio and to Kansas City with several stops by the mid 1940s. Continental primarily used Lockheed Model 10 Electra and Lockheed Model 18 Lodestar aircraft in the 1930s followed by Douglas DC-3's in the 1940s. Larger Convair 240, Convair 340, and Douglas DC-6 aircraft were introduced in the 1950s followed by the Vickers Viscount by 1959. The San Antonio route was extended to Houston by the early 1950s at which time Continental partnered with American Airlines to offer interchange service from Houston and San Antonio to Los Angeles and San Francisco by way of El Paso. Service to Alamogordo, New Mexico was added in 1954 but discontinued in 1963, transferring the route to Frontier Airlines. New nonstop service to Dallas began in 1959 and in the early 1960s Continental received its own authority to operate westbound from El Paso to Los Angeles with stops in Tucson and Phoenix. Jet service began in the early 1960s with Boeing 707 and Boeing 720 jets on the Los Angeles-El Paso-Houston route which also made stops at Phoenix, Tucson, Midland, and San Antonio. Douglas DC-9 jets arrived in 1966 which began jet service on the routes to Dallas, Albuquerque and Denver, and also the route to Kansas City that stopped in Midland, Lubbock, and Wichita Falls, Texas as well as Lawton, Oklahoma City, and Tulsa, Oklahoma. The service to the smaller cities in southeastern New Mexico ended in 1963 (retiring the DC-3 aircraft) and was transferred to Trans Texas Airlines. Continental was operating all jets by 1967 and El Paso became a small hub through the 1970s with up to five flights on the ground at a time using a new rotunda shaped gate area on the end of the east concourse. A widebody Douglas DC-10 was operated on a Los-Angeles-El Paso-San Antonio-Houston flight, eastbound only, in the latter 1970's. Service to the Mexican resort cities of Acapulco, La Paz, Los Cabos, Manzanillo, and Puerto Vallarta was operated from 1979 through 1981. After airline deregulation in 1978, Continental slowly downsized its El Paso operation to flights only serving its hubs at Denver and Houston although nonstop flights to Mexico City were operated during the early 1990s. Continental Express service to Alamogordo, Carlsbad, and Roswell, New Mexico was briefly operated in 1987. The Denver flights ended in 1994 and new Continental Express service with regional jets began replacing Continental's mainline jets to Houston in the 2000s. Continental merged into United Airlines in 2012.

Trans-Texas Airways was the third carrier to serve El Paso. Trans-Texas began operating in 1947 solely within the state of Texas and El Paso was the western terminus for flights from Dallas and Houston that made many stops at small communities throughout central and west Texas. Trans-Texas operated Douglas DC-3 aircraft and flights from El Paso would stop at Marfa, Alpine, Pecos, Ft. Stockton, and several other communities. In 1963 new routes were established to Carlsbad, Hobbs, and Roswell, New Mexico while the initial routes to most of the small Texas cities were discontinued. Larger Convair 240 and Convair 600 aircraft replaced the DC-3's in the mid 1960s. In 1969 the carrier changed its name to Texas International Airlines and new Douglas DC-9 jets began flights from El Paso to Houston making stops in Midland, San Angelo, and Austin. These flights ended in 1971 and a new DC-9 jet flight to Dallas, stopping in Roswell and Midland, operated for a period in 1975. All service to El Paso ended in 1977 but was reinstated in 1980 when nonstop jet flights to Dallas began. Texas International merged into Continental Airlines in 1982 at which time the Dallas flights had ended.

Frontier Airlines (1950-1986) began a route from El Paso to Phoenix in 1950 that made stops in Las Cruces, Deming, Silver City and Lordsburg, New Mexico as well as Clifton, Safford, Globe, and Superior, Arizona. Douglas DC-3 aircraft were used and the service ended in 1955. Frontier returned to El Paso in 1963 with a route to Alamogordo and Albuquerque, New Mexico which eventually continued to Salt Lake City. Convair 580 aircraft were used on this route and in 1967 Frontier began nonstop flights to Albuquerque and onto Denver with Boeing 727 jets. The 727's were later swapped out with Boeing 737-200 jets and new service to several points in Mexico was established from 1978 through 1984. These Mexican destinations included Guadalajara, Ixtapa-Zihuatanejo, Manzanillo, Mazatlán, and Puerto Vallarta. Frontier ceased operating in 1986 and a new Frontier Airlines was established in 1994 with Boeing 737 flights to Albuquerque and Denver.

El Paso International Airport arrivals and security hall, from an aircraft at the A concourse

The terminal is a pier-satellite layout. It has a central entrance and the gates branch out east to west on the two concourses. The airport has East and West Concourses. Gates A1–A4 are located on the West Concourse and Gates B1–B11 is located on the East Concourse. The airport has a total of 15 gates. There is also a lower and upper level. The gates are located on the upper level and the ticketing, baggage claim, rental car, and main entrance are located on the lower level of the terminal. The meeter/greeter area is located on the lower level just behind the escalators that lead to the Transportation Security Administration (TSA) checkpoint leading to the gates. Major terminal renovations have been made over the past several years, designed and managed by the local architectural firm MNK Architects. 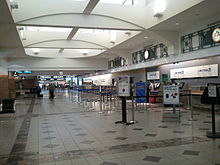 Gates: Generally, these gates are used by: Gates A1–A3: American Airlines and American Eagle. Gate B1: Delta Air Lines. Gates B3–B7: Southwest Airlines And Allegiant. Gates B8 and B9: United Airlines and United Express. Gate B10: Alaska. Gate B11: Frontier.

Food court: The food court is between gates B6 and B11; it has Carlos and Mickey's Mexican Express, Pizza Hut Express, Quizno's and Starbucks.

El Paso International Airport has 15 gates on 2 concourses: Concourse A (used exclusively by American) has gates A1–A4 and Concourse B has gates B1–B11. 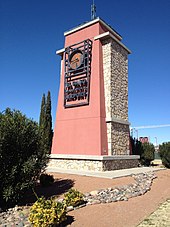