From Wikipedia, the free encyclopedia
This article is about sports complex at Walt Disney World. For other uses, see Wide World of Sports (disambiguation).

In reference to the weekly ABC Sports television show, Wide World of Sports, the complex was originally known as Disney's Wide World of Sports Complex from 1997 until 2010 when it was re-branded with Disney's ESPN trademark. The rebranding was unveiled on February 25, 2010. The complex is a part of the sports tourism emerging market. [1] The complex is mainly used for AAU tournaments, however, many prominent professional sporting events have taken place here, including the restart to the 2019–20 NBA season, MLS is Back Tournament, 2016 Invictus Games, Pro Bowl skills competition from 2017–2020, 1997 U.S. Men's Clay Court Championships, and Atlanta Braves spring training from 1997–2019 among other events.

Disney built the US$100 million facility on former wetlands under the direction of Disney Vice President Reggie Williams. [2] Construction started in July 1995. [3] The complex was built to:

The venue opened on March 28, 1997, with an exhibition baseball game between the Atlanta Braves and the Cincinnati Reds. [4] On April 21–27, the main tennis courts hosted the U.S. Men's Clay Court Tennis Championships. A grand opening was held May 15, 1997. The initial build out consisted of nine venues with a 10th, the Olympic velodrome, expected in the third quarter 1997. [4] Initial tenants were Braves & its rookie team, the Harlem Globetrotters, NFL Experience, the U.S. Men's Clay Court Championships, Amateur Athletic Union, [5] Official All Star Café and Northeastern University's Center for the Study of Sport in Society. [3]:2 Disney bid for the Florida state high school football finals for 1997 but lost to Gainesville. In June 1999, the complex made a deal with the Florida High School Activities Association to host the state prep volleyball championships at the Disney Fieldhouse for three years. [6] USA Trampoline and Tumbling Championships was held at the complex the weekend of June 7, 1997. [7]

A former baseball umpire and an architect alleged that they approached The Walt Disney Company in 1987 with plans for a sports complex, and that Wide World of Sports, which opened 10 years later, was heavily based on their designs. Disney claimed that, while the designs had some similarities, the complex was also similar to numerous other sporting facilities, and the concept of a sports park was too generic for any one group to claim ownership. The two men, represented in part by noted attorney Johnnie Cochran, sued Disney in Orange County civil court. In August 2000, a jury returned a verdict for the plaintiffs with damages in the amount of $240 million, a fraction of the $1.5 billion sought. [8] Disney appealed the judgment, and settled out of court in September 2002 for undisclosed terms. [9]

With Planet Hollywood just out of bankruptcy, Disney offered to purchase its All Star Café located here in February 2000 and acquired the lease in March 2000. [10] It became What's Next? Cafe in 2007 before being rebranded as ESPN Wide World of Sports Grill in 2010. [11]

In August 2004, 20 acres of additional fields, four baseball diamonds with other multi-use fields, were added under the name of Hess Sports Fields. [12] Plans for a 100 lane bowling stadium with restaurant was announced for the complex by Disney officials in May 2008. This stadium would be built and operated by a third party and was supposed to completed in 18 months. About 13 United States Bowling Congress tournaments were expected for facility. [13]

During an ESPN the Weekend kick off event on February 25, 2010, [14] the complex was rebranded as the ESPN Wide World of Sports Complex. It received a massive upgrade, having installed HD video scoreboards at several venues, a new complex-wide audio system, and a broadcast production facility. New venues and activities at the complex included the PlayStation Pavilion and Custom Tee Center by Champion. [15]

Prior to the rebranding in 2007, Disney announced a 450-acre Flamingo Crossings hotel-and-retail development. It would be located near the area for complex visitors and budget-minded Disney World visitors. Shelved due to economic downturn, the project was revived with the 2013 sale of the property to first phase developer JL Properties Inc. of Alaska. An October 16, 2014, groundbreaking took place for the first phase, consisting of two Marriott International brand hotels which opened in January 2016. [16] [17]

In 2008 and 2009, the Disney Channel Games were held at the complex. [18] May 9–11, 2014, a WNBA pre-season tournament consisting of four teams was held alongside an AAU girls basketball tournament at the complex, with the Minnesota Lynx winning the tournament over the Chicago Sky 76–69. [19] While the Citrus Bowl was under repairs, the Orlando City Soccer Club played its 2014 home games at the complex. [20]

In July 2015, it was announced that the 2016 Invictus Games would be held at the complex. [21] The Invictus Games were held from May 8-12, 2016. Prince Harry, Michelle Obama, and Morgan Freeman all spoke at the Opening and Closing ceremony. Over 500 service members were in attendance, along with other notable public figures, including former United States President George W. Bush and former Second Lady Jill Biden [22].

In early January 2018, The Arena opened at the complex as its third indoor multi-purpose sports and entertainment arena. [23] Also that month, United States Specialty Sports Association left for the Space Coast Complex in Viera, Florida ending its use of ESPN's complex. [24]

Since 2017, the Complex is host of the NFL Pro Bowl activities prior to the game. [25] Besides having open practices for fans, ESPN broadcasts the Pro Bowl Skills Showdown, a series of head-to-head competitions between the players. [26] According to event organizers, over the last four years, the Pro Bowl and festivities surrounding it have generated an estimated $100-million economic impact for Central Florida. [25]

In March 2019, it was announced that Wide World of Sports would host the 2022 Special Olympics USA Games. [27]

In May 2020, due to the ongoing COVID-19 pandemic in Florida, there were news reports that both the MLS and NBA were in talks with Disney to host the teams to have their respective seasons in the complex. It was even reported the ESPN complex is in the process of renovating the facilities to be able to host the teams. [28] [29]

It was then confirmed that the complex would host both leagues. The 2020 Major League Soccer season is to be hosted via the MLS is Back Tournament, which will host three regular season matches for each of the 26 teams as well as a World Cup-style tournament to determine a berth into the 2021 CONCACAF Champions League for a total of 54 matches from July 8 to August 11. [30] Meanwhile, the 2019–20 NBA season will conclude at The Arena, HP Field House, and the Visa Athletic Center. 22 teams were invited: the 16 teams in playoff position at the time of the season being put on hold due to the pandemic, including the host Orlando Magic, and the six teams within six games of the eighth and final playoff spot in either conference. The three chosen arenas are set to host scrimmages, eight regular season games for each team invited to the NBA Bubble starting July 30, play-in mini-series if necessary, and the entirety of the NBA Playoffs and Finals, with a potential NBA Finals Game 7 on October 13. [31] [32] 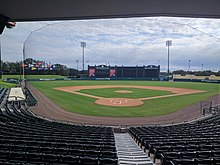 A 7,500 seat baseball stadium built in 1997 also has 2,000 more lawn seating. One of the original components of Wide World of Sports, it was formerly known as Cracker Jack Stadium and The Ballpark at Disney's Wide World of Sports. It was the spring training home of the Atlanta Braves from 1997 to 2019, and the recurring home for the Gulf Coast Braves. The Braves initially announced that 2017 would be their final year in the complex, but their departure would be delayed to 2019. [33] In 2020, the Atlanta Braves officially moved their spring training site to CoolToday Park located in North Port, FL after 21 years in the ESPN complex. [34] The stadium has hosted two regular season Major League Baseball series in 2007 and 2008 featuring the Tampa Bay Rays as the home team. [35] It is sponsored by Hanes with their Champion brand.

A 5,000-seat multi-purpose arena, formerly the Milk House [36] and Disney Fieldhouse, [6] sponsored by HP Inc.. It hosts the AdvoCare Invitational college basketball tournament annually. The HP Field House has 50,000 square feet (4,600 m2) [36] with stadium style seating with the highest row 35 feet (11 m) off the floor. It also features a smaller gymnasium behind the main arena with retractable seating. It was formerly sponsored by the California Milk Processor Board, progenitors of the famous Got Milk? campaign.[ citation needed] Beginning in 2018, the arena hosts the Jr. NBA Global Championship, a tournament that features both boys' and girls' teams divided into national and international regions (and is thus similar in setup to the Little League World Series).

First announced in March 2007, the complex's 10th anniversary year, the Visa Athletic Center (formerly Jostens Center) is a 70,000-square-foot (6,500 m2) arena (36% smaller than the HP Field House without the stadium seating) that opened in the fall of 2008. The center features six college-size basketball courts, twelve volleyball courts, [37] or two roller hockey rinks. Its seating capacity is 1,200.

The Arena opened in early January 2018 as the third indoor multi-purpose sports and entertainment arena at the complex. While multipurpose, the venue was designed for cheer and dance events. Its first event was the UCA and UDA College Cheerleading and Dance Team National Championship, January 12 to the 14, 2018. [23] It has 8,000 seats in standard arena configuration, and features a flexible configuration that can accommodate six regulation-sized basketball or volleyball courts. [23]

One of the fields has 500 permanent seats, and another has 1,000 permanent seats, expandable to up to 3,000 with additional grandstands. Field 17, the field with the larger grandstands, hosts the Walt Disney World Pro Soccer Classic, an annual eight-team preseason soccer tournament featuring Major League Soccer teams.

The complex hosted the USL Pro Orlando City Soccer Club during the 2014 season. The team had additional seating added for a total of 5,200 seats. [20]

The first venue to be completed at the facility, it consists of six fields used for softball and youth baseball. Organized with four fields in circle and two adjacent.

A 500-seat competition facility for track and field events, designed to International Association of Athletics Federations specifications. This venue was one of the original nine venues. [36]

Disney created a third of its events while bidding for other tournaments or attracting long term partners such as the Amateur Athletic Union. As of 2006, the union hosted at the complex 30 to 35 tournaments a year. The United States Specialty Sports Association had reserved six weekends at the complex. [1]