Dragon Con (previously Dragon*Con and sometimes DragonCon) is a North American multigenre convention, founded in 1987, which takes place annually over the Labor Day weekend in Atlanta, Georgia. As of 2017 [update], the convention draws attendance of over 80,000, [1] features hundreds of guests, encompasses five hotels in the Peachtree Center neighborhood of downtown Atlanta near Centennial Olympic Park, and runs thousands of hours of programming for fans of science fiction, fantasy, comic books, and other elements of fan culture. It is owned and operated by a private for-profit corporation, with the help of a 1,500-member volunteer staff. Dragon Con has hosted the 1990 Origins Game Fair and the 1995 North American Science Fiction Convention ( NASFiC). [3]

Dragon Con was launched in 1987, as a project of a local science fiction and gaming group, the Dragon Alliance of Gamers and Role-Players (DAGR). It was founded by a board of directors including John Bunnell, David Cody, Robert Dennis, Mike Helba, Pat Henry, and Ed Kramer. [4]

The name "Dragon" for the club was derived from Kramer's Dragon Computer, which hosted a local Bulletin Board System ("The Dragon") that initially served as a central hub for both organizations. The inaugural Dragon*Con flyers debuted at the 1986 Atlanta Worldcon, ConFederation. Within a year, Dragon*Con had been selected to be the host of the 1990 Origins convention, [5] to take place at the Atlanta Hilton. 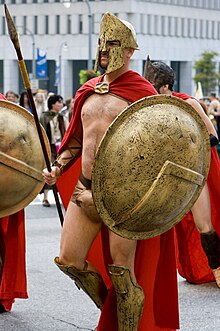 A cosplayer dressed as a Spartan from the movie 300 at the 2007 Dragon Con parade.

The convention grew rapidly. In 1989, it drew 2,400 fans (many to see Guest of Honor Anne McCaffrey), and the event had moved to the Omni Hotel and Convention Center. In 1990, the convention had doubled again, added a Comics Expo, hosted the Origins convention, this time with Guest of Honor Tom Clancy, and expanded to include the Atlanta Sheraton hotel. In 1991 the first "Robot Battles" robotic competition event was added to the list of Dragon*Con events, making it the second oldest robotic competition event in the world. [7]

By 1995, when Dragon*Con hosted the North American Science Fiction Convention, attendance had grown to over 14,000 fans, and Dragon*Con was also hosting the International Starfleet Conference. In 1999, Dragon*Con's TrekTrak introduced the first Miss Klingon Empire Beauty Pageant, an annual event that has since garnered national media attention. [9] [10] [11] [12]

In 2000, Ed Kramer ceased to have an active role in managing the convention, but still owned 34% of the company. In 2011, Kramer sued the organizers, leveling charges that he wasn't receiving his fair share of the con's profits. [13] Kramer's relationship with the convention was fully severed in July 2013 in a cash-out merger, at which point the name of the convention and business officially changed to "Dragon Con" (replacing the asterisk with a space). [14]

On July 6, 2020, it was announced that the year's Dragon Con, which was set to be held on September 3–7, was moved to virtual due to the COVID-19 pandemic. [16] The event was held on the dates originally scheduled, and featured three 24-hour-a-day streams—main events, fan tracks, and DCTV Land—from Thursday evening to Monday afternoon, showing teleconferenced guest interviews, fan panels, and music, as well as reruns of old panels, with DCTV bumpers in between events including some new segments. 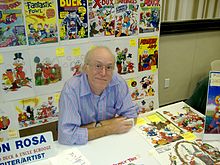 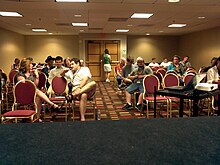 Audience for a 2011 Dragon*Con Panel

The Dragon Con Independent Short Film Festival presents the "finest independent short films of the fantastic". [29] Awards are distributed for a number of categories.

In March 2016, [31] Dragon Con announced the introduction of " Dragon Awards", a fan-voted award "to recognize outstanding achievement in science fiction and fantasy literature, comics, gaming and filmed entertainment". The award process consists of a nomination step, where each voter can nominate one work of choice in every category, and a voting step where the nominated works are voted for to receive the award. The nominations and votes are collected electronically. Participation is freely available to everyone, without any pay or requirement of membership. [32] The finalist shortlist for the first edition of the awards was announced on August 11, 2016; [33] the winners were announced on September 4. [34]

Additional awards include the Futura Award, paying homage to the Fritz Lang masterpiece Metropolis; the Parsec Awards; and the Georgia Fandom Award, renamed in 2008 as the Hank Reinhardt Award, after its first recipient.

In 2002, Dragon*Con began hosting a parade through downtown Atlanta, which ran from Centennial Olympic Park to the Marriott Marquis, and featured thousands of costumed participants. [35] The parade is an annual event.

In 2015, Dragon Con attracted some 70,000+ attendees [36] and had a direct economic impact of $65 million, as reported by the Atlanta Convention & Visitors Bureau in the Atlanta Business Chronicle. [37] According to statistics provided by Georgia State University, Robinson College of Business, Dragon Con brought in over $21 million. [38]

In 2016, two Dragon Con cosplayers, claiming an association with Adult Swim and Cartoon Network and wearing "Make FishCenter Great Again" (a parody on " Make America Great Again") hats, dressed as the World Trade Center during the September 11 attacks. [19] [39] [40] [20] Images of the cosplay were widely shared on social media sites as Facebook, Reddit, and Twitter. [19] [20] Bleeding Cool's Rich Johnston speculated they were cosplaying as the game Rampage, [40] while Facebook commenters drew a connection with the anime Terror in Tokyo. [39] Convention organizers dispatched security to pull their badges and escort them from the property for violating convention policies, but the two had left the area shortly after the photographs were taken. [41]