Downtown Brooklyn is the third largest central business district in New York City, United States (following Midtown Manhattan and Lower Manhattan [3]), and is located in the northwestern section of the borough of Brooklyn. The neighborhood is known for its office and residential buildings, such as the Williamsburgh Savings Bank Tower and the MetroTech Center office complex.

Since the rezoning of Downtown Brooklyn in 2004, the area has been undergoing a transformation, with $9 billion of private investment and $300 million in public improvements underway. The area is a growing hub for education. In 2017, New York University announced that it would invest over $500 million to renovate and expand the NYU Tandon School of Engineering and its surrounding Downtown Brooklyn-based campus. [4]

Downtown Brooklyn is part of Brooklyn Community District 2 and its primary ZIP Codes are 11201 and 11217. [1] It is patrolled by the 84th Precinct of the New York City Police Department. [5] 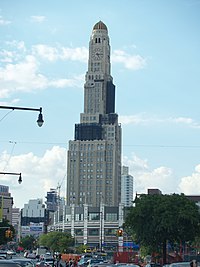 This area was originally inhabited by Lenape Native Americans, until the 17th century. Area close to the Wallabout Bay was called Rinnegokonk. [6] At that time the Dutch arrived, gained control of the land, and called it Breuckelen. The waterfront area being sold by Indians to Joris Jansen Rapelje, who used the land for farm purposes. Until 1814, Downtown Brooklyn and Brooklyn Heights remained sparsely populated. Robert Fulton’s new steam ferry then began to offer an easy commuting option to and from downtown Manhattan. It made Brooklyn Heights Manhattan’s first suburb, and put Downtown Brooklyn on its way to becoming a commercial center, and the heart of the City of Brooklyn.

The city was home to many prominent abolitionists at a time when most of New York was indifferent to slavery. Many Brooklyn churches agitated against legalized slavery in the 1850s and 1860s and some acted as safehouses as part of the Underground Railroad movement. Walt Whitman was fired from his job as a reporter at the Brooklyn Eagle due to his support for the Wilmot Proviso when he lived at Willoughby and Myrtle Avenues. A group of buildings at 223, 225, 227, 231, 233, and 235 Duffield Street, in addition to the African Wesleyan Methodist Episcopal Church located in MetroTech Center, were believed to be among the safehouses. [7]

The middle 19th century growth of the Port of New York caused shipping to spill over into the City of Brooklyn; many buildings now used for other purposes were built as warehouses and factories. Manufacturing intensified with the building of the Brooklyn and Manhattan Bridges; buildings from that time include the 1915 Sperry Gyroscope Company building, now known as the Howard Building of CUNY. [8] New, extensive infrastructure served the Brooklyn Bridge trolleys. 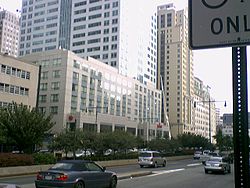 Following World War II, the City Planning Commission, in conjunction with the Borough President’s Office, presented and adopted a Master Plan for the Civic Center, which included an ambitious public improvements program. The program included plans for new buildings for City and State agencies, significant street widening and major housing construction in adjacent areas. A study conducted eight years later highlighted the progress made, emphasizing the widening of Adams Street (and later Boerum Place), which created a long and sweeping approach to Downtown Brooklyn from a modernized Brooklyn Bridge.

By the late 1960s, the patterns of transition that affected much of urban America initiated concern to protect the borough’s Central Business District from deterioration. In 1969, a comprehensive plan for the entire city was completed and in the report the City Planning Commission stated, “[Downtown Brooklyn’s] economy is vital to the borough and important to the entire metropolitan region.”[ citation needed] In re-affirming Downtown Brooklyn’s central role and identifying its problems, the Plan was optimistic that a combination of public and private efforts would stimulate office and commercial construction. A 23-story privately financed office tower at Boerum Place and Livingston Street opened in 1971 and the anticipated growth of the Brooklyn Academy of Music (BAM) succeeded far beyond expectations, giving this cultural institution an important role as a symbolic anchor amid increasing decay during the following decade.

After suffering with the rest of New York through the fiscal crisis of the mid-1970s, Borough President Howard Golden, first elected in 1977, moved forward with a more aggressive economic development program to revitalize Downtown Brooklyn. He identified the need for greater equity in resource allocation between Manhattan and the city’s other boroughs. An important moment in the history of Downtown Brooklyn came in 1983 with the release of a Regional Plan Association report for the area. According to the document, Downtown Brooklyn could become the city’s third-largest business district because of its proximity to Lower Manhattan (closer by subway than Midtown). It also could serve as a prime location for high technology industries and new market-rate housing. The State Street Houses Historic District was listed on the National Register of Historic Places in 1980. [9]

Historically, Downtown Brooklyn was primarily a commercial and civic center, with relatively little residential development. Housing included a few apartment buildings on Livingston Street, and seven 15-story buildings that make up the over 1,000 unit Concord Village co-op development on Adams Street, at the borders of both Brooklyn Heights and Dumbo.

Since the rezoning of parts of Downtown Brooklyn in 2004 to allow for denser residential development, the area has seen the arrival of new condominium towers, townhouses, and office conversions. In all, 14,000 residential units were planned for Downtown Brooklyn at that time.[ citation needed] A New York Sun article from November 7, 2007, reports on the arrival of Downtown Brooklyn as a 24/7 community, estimating that 35,000 residents will come to the area in the next five years. [10] In January 2008, residents started moving into the new residential buildings, according to a New York Sun article. [11]

The New York City Department of City Planning approved another, significant rezoning for portions of Downtown Brooklyn, including the Fulton Mall area, which resulted in significant expansion of office space and ground-floor retail, such as those at City Point. [7] The rezoning consists of "zoning map and zoning text changes, new public open spaces, pedestrian and transit improvements, urban renewal, [and] street mappings". [12] The City Planning initiative also seeks to improve the connections between Downtown and the adjacent neighborhoods of Cobble Hill, Boerum Hill, and Fort Greene.

As of March 2012 [update], the rezoning of Downtown Brooklyn had caused gentrification in nearby neighborhoods. [7] Affordable housing was created in the area after the 2004 rezoning, with 420 affordable units in 2014. The housing increase has also resulted in positive effects on other aspects of Downtown Brooklyn's economy as well, with revenues for the area's hospitality industry having tripled since 2004. [13]

Some of this gentrification was controversial, however. In 2007, the city government was to acquire the houses at 223–235 Duffield Street via eminent domain, then demolish the houses and replace them with 500 new hotel rooms, 1,000 units of mixed-income housing, more than 500,000 square feet of retail space, and at least 125,000 square feet of new office space in the area; however, only 231 Duffield Street was replaced by a hotel. [7] Still, this caused historians to protest over the planned demolition of the historic houses because of their importance to abolitionists during the American Civil War. [14]

MetroTech Center, a business and educational center, lies between Flatbush Avenue and Jay Street, above the Jay Street – MetroTech subway station, north of the Fulton Street Mall, and south of the busy Tillary Street. [15] [16]

The original location of Junior's, founded by Harry Rosen in 1950. [17] The building, at the corner of DeKalb Avenue and Flatbush Avenue Extension, is 17,000 square feet of red-and-white-striped menus, flashbulb-adorned signs, rust-colored booths and a wooden bar. A shrine to the Brooklyn of old, it has become a must-visit for politicians from borough presidents to President Barack Obama, who bought two cheesecakes and a couple of black-and-white cookies during an October 2013 visit with Bill de Blasio. [18]

9 DeKalb Avenue, a residential skyscraper currently under construction adjacent to the Dime Savings Bank of New York. Once complete, it will become the first supertall building in Brooklyn and the tallest structure in New York City outside of Manhattan. [19] [20]

Cadman Plaza Park, named for a prominent evangelist, provides 10 acres (40,000 m2) of green space in the neighborhood, and was recently renovated by the New York City Parks Department. These and other parks form a long mall from Borough Hall to Brooklyn Bridge. A new park is also planned for the area, known as the Willoughby Square Park. [21] [22]

At the northeastern corner of Downtown Brooklyn is Bridge Plaza, bounded by Flatbush Avenue Extension and Manhattan Bridge on the west, Tillary Street on the south, and the Brooklyn-Queens Expressway (BQE) on the north and east. [23] [24] The newer term RAMBO, an acronym for Right Around The Manhattan Bridge Overpass [25] [26] [27] [28] is sometimes applied to the area, comparing it to DUMBO. The neighborhood was connected to Vinegar Hill until the 1950s, when construction of the BQE effectively isolated it from surrounding areas. 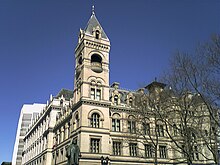 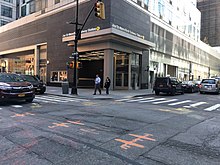 Downtown Brooklyn is connected with Manhattan by the Brooklyn and Manhattan Bridges.

Major stations in the neighborhood are:

A $130 million capital project to connect Lawrence Street–MetroTech ( N, R, and ​ W trains) and Jay Street–Borough Hall ( A, ​ C​, and F and <F>​ trains), which also included renovation of both stations, was completed on December 10, 2010. [31] It features an underground corridor on Willoughby Street connecting both stations, which includes new escalator and elevator access to Lawrence Street.

The Long Island Rail Road stops at the Atlantic Terminal, located at the intersection of Atlantic and Flatbush Avenues.