From Wikipedia, the free encyclopedia
(Redirected from Discount retailer)

A discount store or discount shop is a retail shop which sells products at prices that are lower than the typical market price.

A "full-line discount store/shop" or "mass merchandiser", such as Aldi or Lidl, may offer a wide assortment of goods with a focus on price rather than service, display or wide choice within lines. Meanwhile, a "specialty", "single line" or " category killer" discount store/shop, such as Toys "R" Us or Staples, may specialise in specific merchandise lines, relying on bulk purchase and efficient distribution to keep down costs. [1]

Discount stores/shops are not variety stores, which sell goods at a single price-point or multiples thereof (£1, $2, etc.). Discount stores differ from variety stores in that they sell many name-brand products, and because of the wide price range of the items offered. After World War II, a number of retail establishments in the U.S. began to pursue a high-volume, low-profit-margin strategy designed to attract price-conscious consumers.[ citation needed] This strategy has received renewed interest from retailers and customers alike stemming from the Great Recession that began in 2007 that forced buyers to revisit the approach to the products they wanted. [2] 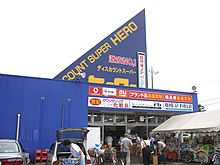 Woolworths entered Canada in the 1920s, the stores were converted to the Foot Locker, Champs Sports and other stores in 1994. Kresge's, a competitor to Woolworth's entered the Canadian market in 1929.

Zellers was founded in 1931, and was acquired by the Hudson's Bay Company in 1978. Giant Tiger opened its first store in Ottawa in 1961, modeled on Woolworths. Winners was founded in 1982 in Toronto, and sells off-price brand clothing. Costco entered Canada in 1986. In 1990, the American chain Walmart purchased the Woolco chain in Canada, and converted the stores to Walmarts. Dollarama was founded in Quebec in 1992. In 1998, Zellers bought out Kmart Canada, taking over its stores.

In 2011, Marshalls, owned by the American TJX Companies, entered Canada, and Zellers sold most of its stores to Target, but still operates 2 stores (in Etobicoke and Nepean) as liquidation centres for The Bay merchandise. Target Canada filed for bankruptcy in 2015, selling its stores to Walmart, Lowe's and Canadian Tire.

In 2016, the Hudson's Bay Company started opening Saks Off 5th locations to sell off-price brands. American off-price chain Nordstrom Rack has announced that its first Canadian location will be opened in Vaughan Mills in 2018.

The most important discount shops in Germany are Aldi, Lidl, Netto Marken-Discount, Norma and Penny.

Action, Euroland, Big Bazar and Zeeman are Dutch discount shops. Action and Zeeman both operate throughout Europe. In addition, the German chains Lidl and Aldi are both operating shops in The Netherlands.

Competition in the global discount shop industry has intensified as the various players try to undercut their rivals to attract new customers and retain existing customers with low priced goods. [5] [6]

See also - List of discount shops in the United Kingdom

During the period from the 1950s to the late 1980s, discount stores were more popular than the average supermarket or department store in the United States. There were hundreds of discount stores in operation, with their most successful period occurring during the mid-1960s in the U.S. with discount store chains such as Kmart, Ames, Two Guys, Gibson's Discount Center, E. J. Korvette, Mammoth Mart, Fisher's Big Wheel, Zayre, Bradlees, Caldor, Jamesway, Howard Brothers Discount Stores, Kuhn's-Big K (sold to Walmart in 1981), TG&Y and Woolco (closed in 1983, part sold to Wal-Mart) among others. [7] [8]

Walmart, Kmart, and Target all opened their first locations in 1962. Other retail companies branched out into the discount store business around that time as adjuncts to their older store concepts. As examples, Woolworth opened a Woolco chain (also in 1962); Montgomery Ward opened Jefferson Ward; Chicago-based Jewel launched Turn Style; and Central Indiana-based L. S. Ayres created Ayr-Way. J. C. Penney opened discount stores called Treasure Island or The Treasury, Sheboygan, Wisconsin based H. C. Prange Co. opened a chain of discount stores called Prange Way, and Atlanta-based Rich's owned discount stores called Richway. During the late 1970s and the 1980s, these chains typically were either shut down or sold to a larger competitor. Kmart and Target themselves are examples of adjuncts, although their growth prompted their respective parent companies to abandon their older concepts (the S. S. Kresge five and dime store disappeared, while the Dayton-Hudson Corporation eventually divested itself of its department store holdings and renamed itself Target Corporation).[ citation needed]

Many of the major discounters now operate " supercenters", which add a full-service grocery store to the traditional format. The Meijer chain in the Midwest consists entirely of supercenters, while Wal-Mart and Target have focused on the format as of the 1990s as a key to their continued growth. Although discount stores and department stores have different retailing goals and different markets, a recent development in retailing is the "discount department store", such as Sears Essentials, which is a combination of the Kmart and Sears formats, after the companies' merger as Sears Holdings Corporation.

Discount stores in the USA have included: