From Wikipedia, the free encyclopedia
For the Mohawk and Hudson Railroad locomotive of the same name, see DeWitt Clinton (locomotive).
American politician

DeWitt Clinton (March 2, 1769 – February 11, 1828), whose name was almost always spelled De Witt during his lifetime and until the late 20th century, was an American politician and naturalist who served as a United States Senator, Mayor of New York City, and as the sixth Governor of New York. In this last capacity, he was largely responsible for the construction of the Erie Canal. [1] [2] Clinton was a major candidate for the American presidency in the election of 1812, challenging incumbent James Madison.

A nephew of long-time New York Governor George Clinton, DeWitt Clinton served as his uncle's secretary before launching his own political career. As a Democratic-Republican, Clinton won election to the New York State Legislature in 1798 before briefly serving as a U.S. Senator. Returning to New York, Clinton served three terms as appointed Mayor of New York City and also won election as the Lieutenant Governor of New York. In the 1812 presidential election, Clinton won support from the Federalists as well as a group of Democratic-Republicans dissatisfied with Madison. Though Madison won re-election, Clinton carried most of the Northeastern United States and fared significantly better than the previous two Federalist-supported candidates. After the presidential election, Clinton continued to affiliate with the Democratic-Republican Party.

Clinton served as Governor of New York from 1817 to 1822 and from 1825 to 1828, presiding over the construction of the Erie Canal. Clinton believed that infrastructure improvements could transform American life, drive economic growth, and encourage political participation. He heavily influenced the development of New York State and the United States. [3]

Clinton was born on March 2, 1769, the second son born to Major-General James Clinton and his wife Mary De Witt (1737–1795), who was a descendant of the Dutch patrician De Witt family. [4] He was born in Little Britain, New York, now a hamlet in the west of New Windsor. He attended Kingston Academy and began his college studies at the College of New Jersey before he transferred to King's College. [5] Kings was renamed Columbia College, and Clinton was the first to graduate under the school's new name. [6] He was the brother of U.S. Representative George Clinton Jr., the half-brother of U.S. Representative James G. Clinton, and the cousin of Simeon De Witt. He became the secretary to his uncle George Clinton, who was then governor of New York. [5] Soon after, he became a member of the Democratic-Republican Party. [5]

In 1811, the death of John Broome left a vacancy in the office of Lieutenant Governor of New York. In a special election, Clinton defeated the Federalist Nicholas Fish and the Tammany Hall candidate Marinus Willett to become Lieutenant Governor until the end of the term, in June 1813. [5]

Clinton's uncle, George Clinton, had attempted to challenge James Madison for the presidency in 1808 but was chosen as the party's vice presidential nominee instead. In 1812, after George Clinton's death, the elder Clinton's supporters gravitated towards DeWitt Clinton. Clinton ran for president as candidate for both the Federalist Party and a small group of antiwar Democratic-Republicans. In the close election of 1812, Clinton was defeated by President Madison. Clinton received 89 electoral votes to Madison's 128. It was the strongest showing of any Federalist candidate for the Presidency since 1800, and the change of the votes of one or two states would have given Clinton the victory. [10]

After the resignation of Tompkins, who had been elected vice president, he won a special gubernatorial election in which he was the only candidate; 1,479 votes were cast for Peter Buell Porter against Clinton's 43,310, because the Tammany organization, which fiercely hated Clinton, had printed ballots with Porter's name on them and distributed them among the Tammany followers in New York City. On July 1, 1817, Clinton took office as Governor of New York. He was re-elected in 1820, defeating Vice President Tompkins in a narrow race DeWitt Clinton received 47,447 votes, as opposed to Tompkins's 45,900, and served until December 31, 1822. [5]

During his second term, the New York State Constitutional Convention of 1821 shortened the gubernatorial term to two years and moved the beginning of the term from July 1 to January 1, which actually cut off the last six months of his three-year term. The gubernatorial election was also moved from April to November, but Clinton was not renominated by his party to run for re-election in November 1822. Even so, he kept his post as President of the Erie Canal Commission. In April 1824, most of his political opponents, the Bucktails, voted in the New York State Legislature for his removal from the Canal Commission, which caused such a wave of indignation among the electorate that he was nominated for governor by the People's Party and was re-elected governor against the official candidate of the Democratic-Republican Party, fellow Canal Commissioner Samuel Young. He served another two terms until his sudden death in office. [5]

In 1826, the William Morgan Affair occurred in Batavia. Morgan, who threatened to publish an exposé of the rituals of Freemasonry, disappeared and was apparently kidnapped and supposedly murdered by Masons. Clinton issued three proclamations, each increasing the reward for information and conviction of the perpetrators until it reached $2,000. [15] Clinton's proclamations had no effect, however, and the Masonic fraternity underwent a period of severe decline in many regions of the United States because of criticism set off by the scandal. [16]

The Grand Lodge of New York has established the DeWitt Clinton Award, which recognizes distinguished or outstanding community service by non-Masonic organizations or individuals whose actions exemplify a shared concern for the well-being of Mankind and a belief in the worldwide brotherhood of Man. [17]

From 1810 to 1824, Clinton was a member of the Erie Canal Commission. He was among the first members, who were appointed in 1810 and planned and surveyed the route to be taken.

As governor, Clinton was largely responsible for the construction of the Erie Canal. He was persuaded by Canal proponent Jesse Hawley to support construction of a canal from the eastern shore of Lake Erie to the upper Hudson River. Many thought the project to be impracticable, and opponents mocked it as "Clinton's Folly" and "DeWitt's Ditch." [18] But in 1817, he got the legislature to appropriate $7 million for construction.

When the canal was finished in 1825, Clinton opened it and traveled in the packet boat Seneca Chief along the canal to Buffalo. After riding from the mouth of Lake Erie to New York City, he emptied two casks of water from Lake Erie into New York Harbor to celebrate the first connection of waters from the East to the West. The canal was an immense success, carrying huge amounts of passenger and freight traffic. The cost of freight between Buffalo and Albany fell from $100 to $10 per ton, and the state was able to quickly recoup the funds that it had spent on the project through tolls along the canal. The completion of the canal brought about a significant shift in public opinion on Clinton, who was now hailed for completing the canal.

That change in public opinion was reflected in the newspapers of the time. Previously being filled with harsh criticisms of Clinton and the canal, they now celebrated his accomplishment. For example, an article in the New Hampshire Sentinel began saying, "The efforts of Gov. Clinton to advance the best interest of the State over which he presides are very generally acknowledged both by his constituents and the public abroad. His exertions in favor of the great canal have identified his name with that noble enterprise, and he will be remembered while its benefits are experienced" It ended, "Yield credit to Clinton, and hail him by name".

Together with financier Thomas Eddy, he was a director of New York's earliest savings bank established to serve laborers and the poor, The Bank for Savings in the City of New-York. [19] 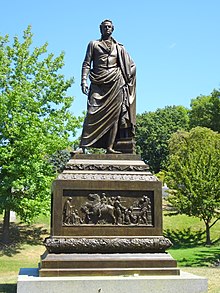 Clinton was married twice. On February 13, 1796, he married Maria Franklin, daughter of the prominent New York Quaker merchant Walter Franklin and descendant of John Bowne and Elizabeth Fones. With her, he had ten children, and four sons and three daughters had survived at the time of her death in 1818. Among his children with Franklin was George William Clinton, who served as mayor of Buffalo, New York from 1842 to 1843.

On May 8, 1819, Clinton married Catharine Jones, the daughter of a New York physician, Thomas Jones and his wife, Margaret (née Livingston) Jones (a daughter of Edward Livingston). Catharine's sister, Mary (née Jones) Gelston, was the wife of Deacon Maltby Gelston of Southampton, and the mother of David Gelston, Collector of the Port of New York. Catharine outlived her husband. [20]

In 1813, Clinton became a hereditary member of the New York Society of the Cincinnati in succession to his brother, Lieutenant Alexander Clinton, who was an original member of the society. [21]

When Clinton died suddenly in Albany on February 11, 1828, he left his family in poor financial condition. While he was a fine administrator in government, he had handled his own financial affairs rather poorly. As a result, the Clinton family was badly in debt and had no means of support after the governor's death. One creditor alone put in a claim for $6,000. Fearing that he might not get his money, the creditor obtained a judgment that resulted in a public sale of most of the Clinton family possessions. Enough money was realized from the sale of the property to satisfy the judgment, but nothing was left to help the Clinton family through the difficult years ahead. The governor received the grandest of state funerals, but when it was all over, the family had no place to bury him. His widow was completely without funds to purchase a suitable grave site. As a result, Clinton's remains were placed in the family vault of Dr. Samuel Stringer (1735-1817), an old friend and fellow Mason from Albany, in the old Swan Street Cemetery.

Sixteen years later, enough money was collected to provide a suitable burial. On June 21, 1844, a newspaper in Albany printed this small announcement: "The remains of DeWitt Clinton, which had been deposited in the cemetery in Swan Street, were removed to New York for interment under a monument created by the family." Clinton was reinterred at the Green-Wood Cemetery in Brooklyn, New York.

Clinton accomplished much as a leader in civic and state affairs, such as improving the New York public school system, encouraging steam navigation, and modifying the laws governing criminals and debtors. The 1831 DeWitt Clinton locomotive was named in his honor. The community of Whitestone, New York, was for several decades after his death known as Clintonville, but reverted to its traditional name; however, the governor is memorialized by Clintonville street, a major local road.