David Alfred Perdue Jr. ( /pərˈduː/; born December 10, 1949) is an American businessman and politician serving as the senior United States Senator for Georgia since 2015. A Republican, he is a first cousin of United States Secretary of Agriculture Sonny Perdue, a former governor of Georgia. He became Georgia's senior senator after Johnny Isakson resigned on December 31, 2019.

Perdue's business career began with more than a decade as a management consultant at Kurt Salmon Associates. He later became vice president at Sara Lee Corporation, senior vice president of operations for Haggar Clothing, and president and CEO of Reebok. After a short stint at Pillowtex, Perdue became CEO of Dollar General. He later became a senior consultant at Gujarat Heavy Chemicals Ltd. (GHCL). In 2010, Perdue was appointed to the Georgia Ports Authority. In 2011, he and Sonny Perdue formed Perdue Partners, an Atlanta-based global trading firm.

Perdue ran for U.S. Senate in 2014. After winning the Republican primary, he defeated Democratic nominee Michelle Nunn in the general election. Perdue is running for reelection in 2020.

David Perdue was born in Macon, Georgia, the son of David Alfred Perdue Sr., and the former Gervaise Wynn, both schoolteachers. [2] [3] [4] David Perdue Sr. was the elected Democratic superintendent of schools for Houston County, Georgia, for twenty years, from 1960 to 1980, where he oversaw the desegregation of the school system during his tenure. [5]

Perdue was raised in Warner Robins, Georgia, and graduated from Northside High School in 1968. [6] [7] He left Warner Robins to start school at the United States Air Force Academy on June 23, 1968, after receiving an appointment from Congressman Jack Brinkley of Georgia. [8]

Perdue did not finish at the Air Force Academy, but went on to earn a bachelor's degree in industrial engineering (1972) and a master's degree in operations research (1975) from Georgia Tech. [9] [10]

Perdue married Bonnie Dunn in August 1972. [11] The couple lives in Sea Island, Georgia. [12] They had a daughter who died in infancy [13] and have two sons, David A. Perdue III and Blake Perdue, and three grandchildren. [9] [12] David Perdue Jr. is the first cousin of former Georgia governor and current United States Secretary of Agriculture Sonny Perdue. [14]

Perdue began his career at Kurt Salmon Associates, an international consulting firm, where he worked for 12 years as a management consultant. [15] His first major corporate job was as senior vice president of Asia operations for Sara Lee Corporation, a position he took in 1992. His time at Sara Lee was followed by a stint at Haggar Clothing, where he became senior vice president of operations in 1994. [16]

In 1998, Perdue joined Reebok as a senior vice president, eventually rising to president and CEO of the Reebok Brand. [17] He is credited with significantly reducing the company's debt and reviving its sneaker line. Perdue negotiated a contract with the National Football League that a former Reebok executive called "revolutionary" for repositioning the company's shoe brand. [3]

Perdue left Reebok in June 2002 to become the CEO of PillowTex, a North Carolina textile company. [18] The company had recently emerged from bankruptcy with a heavy debt load and an underfunded pension liability. Unable to obtain additional funding from the company's investors or find a buyer for the company, he left the company in 2003 after nine months on the job and $1.7 million in compensation.[ citation needed] Pillowtex closed several months later, leaving 7,650 workers out of work nationwide. With more than 4,000 jobs lost statewide, Pillowtex's closure resulted in the largest single-day job loss in North Carolina history at the time. [19]

After leaving Pillowtex, Perdue became CEO of Dollar General. [20] Before he joined the company, it had recently overstated profits by $100 million and paid $162 million to settle shareholder lawsuits. Perdue overhauled the company's inventory line and logistics network and updated its marketing strategy. After initially closing hundreds of stores, the company doubled its stock price and opened 2,600 new stores. [3] Perdue is credited for arranging the sale of Dollar General in 2007 to private equity investors KKR. He reportedly earned $42 million after the deal and Dollar General paid millions of dollars to settle shareholder lawsuits alleging that Perdue and other executives undersold shareholders. [21]

The Atlanta Journal-Constitution has described Perdue as having a "mixed" business record, but says that he was "known on Wall Street as a turnaround specialist who helps revive brands and reap rewards for investors." [3] [21]

In May 2020, Perdue announced that his financial advisors would no longer buy and sell individual stocks after his portfolio was scrutinized during the COVID-19 pandemic in the United States. [25] 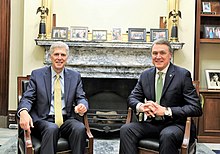 Perdue with Neil Gorsuch in 2017

Perdue with Brett Kavanaugh in 2018

Perdue with Amy Coney Barrett in 2020

Perdue touted his business experience, and particularly his experience at Dollar General, in running for political office as a Republican candidate. According to Perdue, "We added about 2,200 stores, created almost 20,000 jobs and doubled the value of that company in a very short period of time. Not because of me, but because we listened to our customers and employees." He was endorsed by the National Federation of Independent Business. [26]

Perdue's political opponents targeted his business career during the campaign, specifically for outsourcing work offshore. He said he was "proud of" finding lower-cost labor for some companies. Critics noted that he had contributed to a total of thousands of jobs lost following the final closure of Pillowtex, while Perdue left the company after nine months with a nearly $2 million buyout. [19] [26] After being elected, he said he wanted to bring the perspective of "a working person" to Washington, D.C.

Reports also highlighted the overlap between Perdue's role as a Director of the Georgia Ports Authority from 2010 to 2013 and his founding with his cousin and former Governor Sonny Perdue of Perdue Partners, which acquired in 2012 a global logistics firm that provided transloading services at the Georgia ports. [27] [28]

During this campaign, Perdue ran an ad in which the nose of his opponent, Jon Ossoff, was enlarged; the use of an anti-Semitic trope was criticized as a dog whistle reference to Ossoff's Jewish heritage. [31] [32] [33] The ad also featured Ossoff's image next to Senate Minority Leader Chuck Schumer, both of whom are Jewish, and said Democrats are trying to "buy Georgia," with a link to raise funds for Perdue's campaign. [31] [32] [33] His campaign pulled the ad after receiving criticism, [33] saying it was an "inadvertent error" and that his design firm had applied a filter that distorted the image. [31] [32]

In an October 2020 campaign appearance, Perdue repeatedly mispronounced Kamala Harris's name in an apparently mocking way, which led to accusations of racism. [34] [35] [36]

In June 2016, at the Faith and Freedom Coalition's Road to Majority conference, Perdue said, "We should pray for Barack Obama. But I think we need to be very specific about how we pray. We should pray like Psalms 109:8 says. It says, 'Let his days be few, and let another have his office'". [37] In a statement, Perdue's office clarified: "He in no way wishes harm to our president and everyone in the room understood that". [38]

On October 13, 2018, Perdue visited the Georgia Tech campus to campaign for gubernatorial candidate Brian Kemp. During his visit, a Georgia Tech student approached Perdue and asked him a question about voter suppression. Perdue snatched away the student's phone, which was recording the exchange. [39] The student filed civil suit, alleging unlawful battery. [40]

With a net worth of $15.8 million, Perdue is one of the wealthiest members of the Senate. [1]

Perdue rejects that there is a scientific consensus on climate change. [41] He has criticized the U.S. Environmental Protection Agency and supported Trump's appointment of Scott Pruitt as EPA administrator, saying in 2017, "Outside of eliminating the EPA altogether, Scott Pruitt is the next best thing." [42] Perdue was one of 22 Republican senators to sign a letter to Trump urging him to withdraw the U.S. from the Paris Agreement. [43] [44] According to the Center for Responsive Politics, he received over $180,000 from oil, gas and coal interests between 2012 and 2017. [44]

Perdue is a close ally of Trump. [45] [46] Some of Perdue's only public criticism of Trump centered on the issue of tariffs. Perdue was initially reluctant to support Trump's proposed tariffs on foreign steel and aluminum but came to support them. [45] [47]

On January 11, 2018, Perdue attended a meeting at the White House where, according to people with direct knowledge of the conversation, Trump called Haiti, El Salvador and African countries "shithole nations" and said the United States should not take in immigrants from these countries. [48] Perdue stated that he did not recall Trump making those specific statements. [49] [50] [51] Three days later, on ABC's This Week, Perdue said he now remembered that Trump did not use those words. [52]

During the coronavirus pandemic, Perdue praised President Trump's response. [53] Asked why he excoriated President Obama for his response to the ebola outbreak in 2014 but praised Trump's response to the coronavirus in 2020, Perdue said, "It's a totally different situation." [53] In September 2020, after February 2020 video recordings were released where Trump said he intentionally downplayed the severity of the coronavirus, Perdue defended Trump, saying, "I understand trying to manage the psyche of the country and also look at the actions that he took. ... I look at what he did -- and it was certainly a strong response." [54]

Perdue at the 2016 Republican National Convention

In September 2018, Perdue was one of six Republican senators (along with Jeff Flake, Mike Lee, Rand Paul, Ben Sasse, and Pat Toomey), as well as Bernie Sanders, who voted against a $854 billion spending bill for the Defense, Health and Human Services, Labor and Education departments, meant to avoid a government shutdown. [57]

In April 2018, Perdue was one of eight Republican senators to sign a letter to United States Secretary of the Treasury Steve Mnuchin and acting Secretary of State John Sullivan expressing "deep concern" over a report by the United Nations exposing "North Korean sanctions evasion involving Russia and China" and asserting that the findings "demonstrate an elaborate and alarming military-venture between rogue, tyrannical states to avoid United States and international sanctions and inflict terror and death upon thousands of innocent people" while calling it "imperative that the United States provides a swift and appropriate response to the continued use of chemical weapons used by President Assad and his forces, and works to address the shortcomings in sanctions enforcement." [58]

In March 2017, Perdue co-sponsored the Israel Anti-Boycott Act (s. 720), a proposed bill that would make it a federal crime for Americans to encourage or participate in boycotts against Israel and Israeli settlements in the occupied Palestinian territories if protesting actions by the Israeli government. [59] [60]

In November 2019, Perdue blocked a vote on recognizing the Armenian Genocide after receiving a White House request to do so. [61]

In January 2020, Perdue expressed support for the US military's assassination of Iranian major general Qasem Soleimani by drone strike at the Baghdad International Airport. [62] [63]

Perdue supports repealing the Affordable Care Act (Obamacare). [64] While running for re-election in 2020, Perdue claimed his proposed health care policy was that "health insurance should always cover preexisting conditions. For anyone. Period." PolitiFact rated this claim as "false", noting that Perdue supported policies that would allow insurers to not cover all pre-existing conditions. [65] [66]

In 2017, Perdue and Tom Cotton were co-sponsors of the RAISE Act, an immigration reductionist proposal that would cut legal immigration to the United States by 50% over a ten-year period, restrict family reunification part of the Immigration and Nationality Act of 1965, eliminate the diversity visa lottery, and create a points-based immigration system that would favor skilled immigrants. [67]

In June 2019, Perdue supported Trump's decision to place tariffs on Mexico unless illegal immigration from Mexico stopped. Perdue said, "He has to use a hammer. We're being invaded right now." [68]

Perdue opposes the Common Core plan, which Georgia Republican leaders adopted in 2010, and then turned against. Perdue said he supported "the original intent" of Common Core but took issue with "the details" and "how it's going to be administered," saying "Common Core has become overreaching and should be abandoned." [69]