Dallas Area Rapid Transit (DART) is a transit agency serving the Dallas–Fort Worth metroplex of Texas. It operates buses, light rail, commuter rail, and high-occupancy vehicle lanes in Dallas and twelve of its suburbs. DART was created in 1983 to replace a municipal bus system and funded expansion of the region's transit network through a sales tax levied in member cities. DART's light rail system is the longest in the United States, at over 93 miles (149.7 km), and began operation in 1996. At 95,800 weekday boardings, it is also the 6th busiest light rail system in the United States. DART operates the Trinity Railway Express between Dallas and Fort Worth, through an interlocal agreement with Trinity Metro. The agency also operates the Dallas Streetcar and provides funding for the non-profit McKinney Avenue Streetcar.

DART reported the following ridership numbers in the 4th quarter of 2012: [8]

The Dallas Transit System (DTS) was a public transit service operated by the city of Dallas, from 1964 to 1983. DTS was formed by the consolidation of various privately owned transit companies and streetcar lines. Prior to DTS, the company was formerly known as the Dallas Railway and Terminal Company when Dallas had an extensive streetcar system that spanned from Oak Cliff to North Dallas. The name was changed shortly after the last streetcar ran in January 1956. DART formally took over operations of the DTS in 1988.

DART was created on August 13, 1983 as a regional replacement for the DTS (Although the name "Dallas Area Rapid Transit" was intended to reflect the new agency's coverage of the greater Dallas-Fort Worth Metroplex, its acronym DART almost immediately evoked comparisons to San Francisco's Bay Area Rapid Transit system, known as BART). Citizens of 15 area cities had voted to levy a 1% sales tax to join the system by the time it began transit services in 1984 (though formal acquisition of the Dallas Transit System wouldn't be complete until 1988). [11] [12]

In 1985, member cities Carrollton and Farmers Branch held elections to pull out of DART, though the measures failed. But shifting suburban politics and a loss of confidence in DART management after voters declined to support DART's measure to incur long term debt in 1988 led to seven more pullout votes, two of which ( Flower Mound and Coppell) were successful. Just one suburb joined DART — the tiny community of Buckingham, which was later annexed by DART member city Richardson.

In December 2007, DART revealed it was facing a $1 billion shortfall in funds earmarked for the Blue Line rail service to Rowlett and Orange Line service to Irving, and DFW Airport. In January 2008, DART announced it would divert monies from rail lines being built in Dallas. When Dallas officials protested, DART president and executive director Gary Thomas—who had known about the shortfall for at least eight months—announced the agency would borrow more money.

In late January 2008, DART Board chair Lynn Flint Shaw, who was also treasurer of Dallas Mayor Tom Leppert's "Friends of Tom Leppert" fund-raising committee, resigned from her DART post. In February, she surrendered to the police on charges of forgery. On March 10, Shaw and her husband, political analyst Rufus Shaw, were found dead in their home in what turned out to be a murder suicide. [13] [14]

On July 7, 2016, one DART officer was among several people shot in a mass shooting targeting police officers providing security at a Black Lives Matter protest. [15] [16] One of the officers, identified as seven-year veteran Brent Thompson, died from his injuries and became the first DART officer to be killed in the line of duty since the department's inception. [15] [17]

The DART light rail system comprises 93 miles (149.7 km) between its four lines — the Red Line, the Blue Line, the Orange Line and the Green Line. According to NCTCOG transit statistics, DART's light rail system had a daily ridership of 109,511 average trips per weekday in October 2012. The system uses light rail trains manufactured by Kinki Sharyo, with all trains being converted to "Super" LRVs ( SLRVs) which feature level boarding (especially convenient for strollers and wheelchairs) and higher passenger capacity. [18] All 163 of DART's light rail vehicles have been converted and are now SLRVs. [19]

The following lines are active:

On December 18, 2000, DART opened the first public subway station in Texas. Cityplace station is served by the Red, Blue, and Orange Lines. [21]

DART also assists in the operation of the M-line Trolley, with a joint operating subsidy given to the McKinney Avenue Transit Authority along with the Uptown Improvement District.

In May 2013, [22] [23] DART began construction on a 1.6-mile (2.6 km) streetcar line which will operate between downtown Dallas and Oak Cliff by way of the Houston Street Viaduct. [24] Phase one of the streetcar line, running between Union Station in Dallas and Methodist Dallas Medical Center in Oak Cliff, opened on April 13, 2015. [25] The line was expanded to its current length in August 2016 with the addition of the 6th Street and Bishop Arts stops.

The Trinity Railway Express (TRE) commuter rail line connects downtown Dallas with downtown Fort Worth. The TRE, created in 1996 by an interlocal agreement between DART and Trinity Metro, connected the cities' centers by rail for the first time since the 1930s, excluding Amtrak's Texas Eagle.

The TRE commuter line has an average weekday ridership of 7,300 passengers per day [8] and is the fifteenth most-ridden commuter rail system in the country. In 2012, the TRE carried a total of 2.3 million passengers. [26]

The Denton County Transportation Authority (DCTA) built its A-train commuter rail service in partnership with DART and the TRE. The DCTA leases the right-of-way for its 21 miles (34 km) commuter line from DART, and coordinates with DART to provide connecting service between the A-train and DART's Green Line. The DCTA also leased Budd diesel rail cars from the TRE for its initial service. [27] The A-train operates between downtown Denton and Trinity Mills station, where a transfer to the Green Line is available. Through its partnerships with DART and TRE, DCTA sells "Regional" fare passes which include access to DART and TRE service. [28] 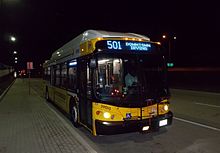 In 2015, DART operates 121 fixed-regular bus routes and several circular and shuttle routes. There are 27 local routes, which serve downtown Dallas. Some locals link the suburbs with downtown Dallas. There are 9 express routes which ferry passengers between two areas with limited or no stops in between. These use HOV lanes on freeways when possible. There are 15 suburban routes, which link the suburban neighborhoods of DART to transit centers. DART has 20 crosstown routes which run through Dallas and its suburbs, but not downtown. The final fixed route category are the 50 rail-feeder routes that start and/or end at rail stations.

DART numbers its bus routes according to the type of route:

In addition to the above regular fixed routes, DART will also contract with its neighbors or businesses and run circulators, like the Southern Methodist University or NorthPark Center circulators or shuttles for Texas Instruments or UT Southwestern Medical Center. The circulator routes are given number in the 700 range, while the shuttles are listed in the 800s.

DART has 7 transit centers, which are:

In addition, to make transfers easier, most rail stations are hubs for DART buses.

On October 2012, DART introduced a new fleet of 14 to 17-passenger buses for its on-call & Flex services, and beginning on October 22, some select bus routes that are less-traveled. [29] Beginning in 2013, DART would replace most of bus fleet with NABI 40LFW buses running off CNG fuel. Voted unanimously, by state government to rapidly revise to a clean-air fleet over their existing diesel buses.

Prior to the bus and rail changes on October 6, 2003, DART has launched its premium on-call shuttle service to replace many low-productive DART bus routes. It was first opened in some North Dallas and Plano neighborhoods and, in late 2005, it expanded to Glenn Heights in Northern Ellis County. DART On-Call operates on weekdays only (except on holidays). [30] 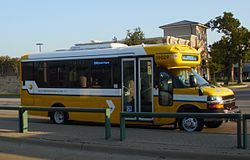 DART introduced a new service into its system called a "Flex" service in 2008. It is similar to DART On-Call but combines the advantages of a fixed bus route along with curbside pickup. It uses a local fare on stops at fixed routes and/or a premium fare on curbside pickups and dropoffs within the Flex zone if time permits. Customers in those areas who desire a pickup at a specific location may do so by calling DART 1 h before their destination time or at stop. [31]

Up to two children under 5 travel free if accompanied by a fare-paying rider. GoPass can be used for all of the fare types below.

A bus operating in Downtown Dallas.

Regional: DART buses and trains; all Trinity Railway Express service; Trinity Metro in Fort Worth; and DCTA in Denton, including the A-train.

* Reduced fares are applicable on bus and rail for seniors and non-paratransit riders with disabilities; children ages 5–14; Medicare card holders; designated bus circulators, all of which are charged at the local rate.

** Reduced high school fare is valid Monday through Sunday for students with valid photo ID from a high school within the DART service area.

In addition to the cities that voted to join DART at its creation, the legislation that created DART specifies any city adjoining Dallas may join the agency. In addition, any city that adjoins a DART member city becomes eligible to join. Member cities fund DART with a 1% sales tax. This levy prevents some cities from joining, due to Texas laws that cap the total sales tax that may be charged.

In 2003, the Texas Legislature enacted new legislation enabling countywide transit districts in areas adjacent to major metropolitan areas (such as the Denton County Transportation Authority), but DART's membership rules were not affected.

In addition to the city of Dallas, the following cities are also DART members:

Addison planned a vote to withdraw from DART but cancelled the measure in January 1990.

Farmers Branch voted to remain a DART member in January 1985 by a 61–39 percent margin, and again voted in November 1989 to remain a member.

Richardson annexed the former city of Buckingham in 1996; Buckingham was (and remains) the only city to join DART subsequent to the 1983 charter election. Also, Buckingham planned a withdrawal vote but cancelled it in July 1989.

All the suburbs listed joined DART as charter members in 1983 (except for Buckingham, no other cities have joined DART subsequent to 1983, and two cities later withdrew as shown below). Glenn Heights is the only suburb which, had it not joined DART in 1983, would be ineligible for membership today, as it does not border either Dallas or another DART member city.

The cities of Coppell and Flower Mound were original members of DART. However, after voters in the DART service area rejected a 1988 ballot measure plan which would have allowed DART to take on long-term debt, the cities placed measures on the 1989 ballot to withdraw from DART, and the voters approved the measures.

Flower Mound is no longer eligible to rejoin DART as it does not border a DART member city. Flower Mound voters were asked to join DCTA in 2003 but rejected that measure as well.

Eligible cities that are not members of DART

These cities are eligible to join DART as they are adjacent to either Dallas or another DART member city, but have not chosen or are unable to levy the required 1% sales tax required for membership and regular service. However, DART can establish service to non-member cities under certain conditions. In addition to the Trinity Railway Express interlocal agreements, DART serves destinations like Eastfield College, which is within the city limits of non-DART member Mesquite.