From Wikipedia, the free encyclopedia
For other uses, see Majestic Theatre (disambiguation). 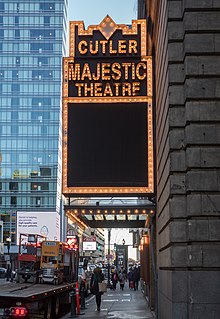 The Cutler Majestic Theatre at Emerson College, in Boston, Massachusetts, is a 1903 Beaux Arts style theater, designed by the architect John Galen Howard. [2] Originally built for theatre, it was one of three theaters commissioned in Boston by Eben Dyer Jordan, son of the founder of Jordan Marsh, a Boston-based chain of department stores. The Majestic was converted to accommodate vaudeville shows in the 1920s and eventually into a movie house in the 1950s. The change to film came with renovations that transformed the lobby and covered up much of John Galen Howard's original Beaux-Arts architecture.

The theater continued to show movies until 1983 as the Saxon Theatre. By then, the theater began to deteriorate both in appearance and in programming.

In the mid-1980s Emerson College purchased the theater and restored it to its original Beaux-Arts appearance. [3] The theater today is a performing arts center for both Emerson College and the community at large. It was the home base of Opera Boston. It is frequently staging shows by New England Conservatory, Teatro Lirico D'Europa, Celebrity Series of Boston, Emerson College's Emerson Stage company and the Boston Gay Men's Chorus. In 2003 the theater was again renamed the Cutler Majestic Theatre, after donors Ted and Joan Benard-Cutler.