Culture of the Native Hawaiians

From Wikipedia, the free encyclopedia
Pattern of human activity and symbolism associated with Hawaii and its people 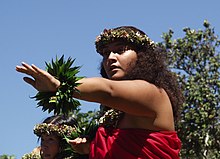 The culture of the Native Hawaiians is about 1,500 years old and has its origins in the Polynesians who voyaged to and settled Hawaii. Polynesia is made of multiple islands that include Hawaii, New Zealand, Samoa, among others within the Pacific Ocean. These voyagers developed Hawaiian cuisine, Hawaiian art, and the Native Hawaiian religion.

The original Hula dance originates from Polynesians who voyaged to the Hawaiian Islands, landing on the Hawaiian Islands and further developing the native Hula dance. Hula falls into two categories which are Hula Auana and Hula Kahiko. Hula Auana is Hula that was changed by Western influences and performed with musical instruments that do not originate from the Hawaiian Islands. Hula Kahiko is the original Hula dance which was refined before any outside influence. [1] The Merrie Monarch Festival was created to honor King David Kalākaua, who was the last reigning king of Hawaii. He was known for bringing Hula back to the Hawaiian Islands after the United States missionaries arrived. [2] The annual competition held in Hilo brings Hula Halau from all over the world to compete and show their knowledge of Hawaiian culture. The Merrie Monarch Festival is nationally televised and teaches people all around the world about Hawaiian culture.

Hawaiian Outrigger Canoe Paddling was not only the way that native Hawaiians discovered the Hawaiian Islands, it was a part of their everyday lifestyle. [3] From paddling for leisure to traveling from island to island, it has been a tradition of the Native Hawaiian culture. As of the 21st century, Outrigger canoe paddling has become an international sport and educates people from all over the world about Hawaiian culture.

When Polynesians first migrated to the Hawaiian Islands, almost no edible plants were available. When more people came to the Hawaiian Islands they brought many different plants so they would have food to eat. Polynesians also brought pigs, chickens, and dogs and bred them on the islands. The most important food eaten was taro, which was used to make poi; this was a big part of their everyday diet. Some common Hawaiian dishes include: Kalua pig, Lau-lau, Poke, Squid Luau, and Haupia. [4]

Hoʻoponopono (ho-o-pono-pono) is a cultural practice of reconciliation and forgiveness, usually combined with prayer. Similar forgiveness practices were performed on islands throughout the South Pacific, including Samoa, Tahiti and New Zealand. It is used in spiritual, emotional, mental, and physical healing practices. Traditional Hawaiian philosophy does not consider the physical and non-physical aspects of the world to be separate, therefore, to heal one aspect, all must be healed. Conversely, healing one will help to heal the rest. For example, if a person has an upset stomach, healing anger toward a sibling may also help to heal the stomach. Modern versions of hoʻoponopono may also contain elements of Christian belief and ritual. A session of hoʻoponopono is generally guided.

In the 1830s, interactions between Hawaii and other western cultures such as Mexicans, Portuguese and Spanish began. [8] During the 1850s, Hawaiian culture was progressively influenced by western cultures. [9] Cultural interaction consisted of incorporating useful items into each other's daily lives. Prior to the arrival of western cultures, Hawaiian music was called Mele, Mele includes poems, songs, or chants that were passed down through generations. When the Portuguese, Mexicans, and Spanish landed on the Hawaiian Islands, they brought musical instruments such as the ukulele and the guitar and taught Hawaiians how to play these instruments.

Hawaiians were in a difficult place due to the fact that they were becoming influenced by different cultures. The end of the 19th century was burdened with internal struggles since Hawaiians wanted to protect their culture and keep power over their land. When missionaries from the United States arrived in Hawaii in 1820, they found it difficult to understand Hawaiian culture and had very negative opinions about their culture. [10] This led to the oppression of Hawaiian culture during the early 20th century. The cultural oppression of Hawaiians was evident from the banning of Hula dancing and other Hawaiian arts such as the language, the use of paddling, and music. Hawaiian children were sent to missionary schools where they were taught the English language. Missionaries institutionalized the English language by teaching it to children and making it the language of doing business and working in the government. [9]

In 1898 United States Congress passed the “ Newlands Resolution” it was signed into law by President McKinley on July 7, 1898. [11] Sixty-one years later in 1959, the Hawaiian Islands were recognized as the 50th state of the United States. At the height of the Hawaiian population there were an estimated 683,000 Native Hawaiians on the island. [12] By the year 1900 the population had dropped to below 100,000 due to disease. [12] Hawaiians have also been reduced to 20% of resident population die to disease, inter-marriage and immigration. [13] A huge factor of the decline of Native Hawaiians consisted of the spread of diseases from outside Hawaii such as smallpox, cholera, influenza, and gonorrhea. [14]

Today's Hawaii is more diverse since becoming a state; there are not as many pure-blooded native Hawaiians left. Ever since Captain James Cook discovered Hawaii many Native Hawaiians have died due to all the new diseases exposed to them. [15] Many Native Hawaiians are homeless or impoverished. In 2016, there are studies from the Department of Housing and Urban Development showing that 42% of Hawaii's homeless population identifies as either Native Hawaiian or Pacific Islander. [16] Hawaii's culture may have faded a little, but the culture is still living and beautiful place to see. Natives still there practice cultural Hula and Luau celebrations, but it is more for tourism and showing off the Hawaiians' culture for economic gains. On average about 220,000 tourists go to Hawaii per day according to studies in 2016. [17]

Hawaiiana is a popular term of academia used in reference to history and various aspects of the culture of Hawaii, currently a region and state of the United States. The term is used especially in reflection of the periods of antiquity and the Kingdom of Hawaii era. Hawaiiana has become increasingly popular among students of history and sociology throughout the world. The principal repository of Hawaiiana is the Princess Bernice Pauahi Bishop Museum in Honolulu on the island of Oahu. The institution is also called the Hawaii State Museum of Natural and Cultural History and often shares artifacts and information with other institutions globally for research and study.

The term "Hawaiiana" was coined in 1948 by Hawaiian entertainer and cultural expert, Nona Beamer. [18]

Erica Lee and Melissa Gan, writing for The Sheaf, discussed the appropriation of Hawaiian culture by non-Hawaiian students and the stigma that comes from the criticism of appropriation. They criticized the oversimplification of the culture. [19] In 1919 David and Lydia Bray and a group of young girls gathered before a court of Hawaiians who had power behind their names. They performed a traditional Hula dance. The judges deemed the presentation as nothing more than a cultural dance. [20] It wasn't until the 1930s that Americans came into contact with Hawaiians after annexing their land. [20] Contact between the Hawaiian Islands and the United States began through the use of live performances. Hawaiian women came to America and danced a westernized version of Hula which created an “imagined intimacy [20]” between Americans and Hawaiians. Americans felt a true connection to the Hawaiian culture, however, Hawaiians were upset about their land being annexed by the United States and wanted no part of American culture. Hawaiians didn't see this representation of their Native Hula dance as true Hula.

America has portrayed a false Hawaiian lifestyle by using outside influences such as Hollywood movies, music, and marketing. Corporate companies have gone through a lot of trouble to make a profit from Hawaiian culture. [13] For example, the traditional Luau was used to celebrate specific events such as weddings, birthdays, and graduations. Luaus have changed from a traditional party to paying a price to feel like a part of the Hawaiian culture. Traditional Luaus didn't include alcohol, island buffets, or performances. They also didn't happen every day of the week. [13] Americans westernized the native Hawaiian Luau to create profit from tourists coming to Hawaii for an unfamiliar experience. [13] Many native Hawaiians now make a living from tourists coming to the islands and pretending that the Luaus performed every night are native.