From Wikipedia, the free encyclopedia
(Redirected from Crotalus adamanteus)
Species of reptile endemic to the southeastern US

The eastern diamondback rattlesnake (Crotalus adamanteus) [3] [4] is a species of venomous pit viper in the family Viperidae. The species is endemic to the southeastern United States. It is one of the heaviest venomous snakes in the Americas and the largest rattlesnake. No subspecies are recognized. [5] 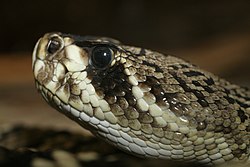 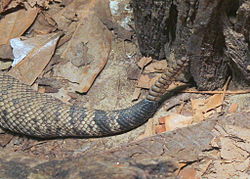 The scalation includes 25–31 (usually 29) rows of dorsal scales at midbody, 165–176/170–187 ventral scales in males/females and 27–33/20–26 subcaudal scales in males/females, respectively. On the head, the rostral scale is higher than it is wide and contacts two internasal scales. There are 10–21 scales in the internasal- prefrontal region and 5–11 (usually 7–8) intersupraocular scales. Usually, there are two loreal scales between preoculars and the postnasal. There are 12–17 (usually 14–15) supralabial scales, the first of which is in broad contact with the prenasal, and 15–21 (usually 17–18) sublabial scales. [13]

The color pattern consists of a brownish, brownish-yellow, brownish-gray or olive ground color, overlaid with a series of 24–35 dark brown to black diamonds with slightly lighter centers. Each of these diamond-shaped blotches is outlined with a row of cream or yellowish scales. Posteriorly, the diamond shapes become more like crossbands and are followed by 5–10 bands around the tail. The belly is a yellowish or cream-colored, with diffused, dark mottling along the sides. The head has a dark postocular stripe that extends from behind the eye backwards and downwards to the lip; the back of the stripe touches the angle of the mouth. Anteriorly and posteriorly, the postocular stripe is bordered by distinct white or yellow stripes. [13]

The eastern diamondback rattlesnake is found in the southeastern United States from southeastern North Carolina, south along the coastal plain through peninsular Florida to the Florida Keys, and west along the Gulf Coast through southern Alabama and Mississippi to southeastern Louisiana. The original description for the species does not include a type locality, although Schmidt (1953) proposed it be restricted to " Charleston, South Carolina" (USA). [2] In June 2020, a man was bitten by an Eastern Diamondback rattlesnake in Palisades Interstate Park in New Jersey. This is the farthest known reach of the snake to date. The species was confirmed by a photo that the man took right before he was bit.

This snake species is classified as Least Concern on the IUCN Red List (v3.1, 2001). [1] Species are listed as such owing to their wide distribution or presumed large population, or because they are unlikely to be declining fast enough to qualify for listing in a more threatened category. The population trend was down when assessed in 2007. [23]

In North Carolina, the eastern diamondback rattlesnake is protected by state law and considered endangered within the state. [24] It is likely extirpated in Louisiana, having last been observed there in 1995. In fact some scientists and conservationists believe it may even be extirpated in North Carolina. [25]

This species is currently under review for being added to the Endangered Species List by the United States Fish and Wildlife Service owing to its recent decline, [26] and the current population represents only 3% of the historical population. [27] 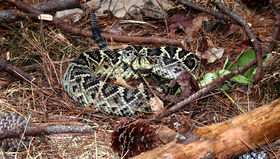 The eastern diamondback rattlesnake frequently shelters by tunneling in gopher and tortoise burrows, emerging in the early morning or afternoon to bask. [28]

Like most rattlesnakes, this species is terrestrial and not adept at climbing. However, it has on occasion been reported in bushes and trees, apparently in search of prey. Even large specimens have been spotted as high as 10 m (33 ft) above the ground. [3]

It is also known to be an excellent swimmer. Specimens have often been spotted crossing stretches of water between barrier islands and the mainland off the Georgia coast, in the Gulf of Mexico and in the Florida Keys, sometimes miles from land. [3]

Individual disposition varies, with some allowing close approach while remaining silent, and others starting to rattle at a distance of 6–9 m (20–30 ft). [16] The rattle is well developed and can be heard from relatively far away. When threatened, it raises the anterior half of the body off the ground in an S-shaped coil, and can strike to a distance of at least a third of its body length. [29] Many will stand their ground and may strike repeatedly, but if given the opportunity, they will usually retreat while facing the intruder and moving backwards towards shelter, after which they disappear. [3] [28] [29]

One popular myth is that the eastern diamondback rattlesnake must rattle before striking. To the contrary, it is quite capable of striking while remaining completely silent. [30]

Hawks, eagles, and other snakes have been known to prey upon young and adolescent specimens of the eastern diamondback rattlesnake.

The eastern diamondback rattlesnake forages actively or lies in ambush for small mammals, especially rabbits and rice rats ( Oryzomys). The diet also includes birds. Prey is struck and released, after which the snake follows the scent trail left by the dying prey. [28]

Because of their large size, adults have no problem eating prey as large as fully grown cottontail rabbits. As the juveniles are capable of swallowing adult mice, they do not often resort to eating slimmer prey, such as lizards. In fact, eastern cottontails and marsh rabbits ( Sylvilagus) form the bulk of the diet in most parts of Florida. Squirrels, rats, and mice are also eaten, along with birds such as towhees and bobwhite quail. Other prey that have been reported include a king rail, a young wild turkey, and a mother woodpecker along with four of her eggs. [3] It also eats large insects.

Rattlesnakes, including the eastern diamondback, are ovoviviparous. Gestation lasts six or seven months and broods average about a dozen young. However, the young only stay with the mother 10–20 days before they set off on their own to hunt and find cover.

Females give birth to between 7 and 21 young at a time, usually between July and early October. Neonates are 30–36 cm (12–14 in) in length [31] and are similar in appearance to the adults, except for having only a small button instead of a rattle on the tip of their tails. [29]

The eastern diamondback can live beyond 20 years, but life expectancy in the wild is now typically shorter because of hunting and human expansion. 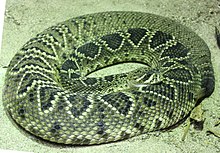 Adult wild-caught specimens are often difficult to maintain in captivity, but captive-born individuals do quite well and feed readily on killed laboratory rodents. The eastern diamondback requires a dry and well-ventilated cage with a hide-box, maintained at a temperature of 23–27 °C (73–80 °F) for normal activity. [28] 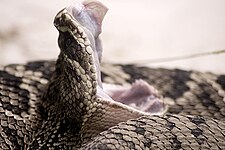 The eastern diamondback rattlesnake has the reputation of being the most dangerous venomous snake in North America. [31] While not usually aggressive, it is large and powerful. Wright and Wright mentioned a mortality rate of 30%, but other studies show a mortality rate of 10–20% (untreated). [17] [32]

The venom contains a thrombin-like enzyme, "crotalase", capable of clotting fibrinogen, leading to the secondary activation of plasminogen from endothelial cells. Although the venom does not activate platelets, the production of fibrin strands can result in a reduced platelet count, as well as the hemolysis of red blood cells. Even with this defibrination, however, clinically significant bleeding is uncommon. [35] Nevertheless, the venom does exhibit high hemorrhagic activity. [36] It also contains a low-molecular-weight basic peptide that impedes neuromuscular transmission [37] and can in theory lead to cardiac failure. This peptide is similar to crotamine from C. durrisus terrificus, and makes up 2–8% of the protein found in the venom. In general, the venom can be described as highly necrotizing, mildly proteolytic and containing a large phosphodiesterase fraction. It stimulates the release of bradykinin that can result in severe pain, as well as profound, transient hypotension. [33]

Klauber described one case in which the symptoms included instant pain "like two hot hypodermic needles", spontaneous bleeding from the bite site, intense internal pain, bleeding from the mouth, hypotension, a weak pulse, swelling and discoloration of the affected limb, and associated severe pain. The symptoms were further described as strongly hemolytic and hemorrhagic. [3]

CroFab and Wyeth's ACP are effective antivenoms against bites from this species, although massive doses may be needed to manage severe cases of envenomation. Generally, ACP is very effective at countering the defibrination syndrome that is often seen, but may do little for low platelet counts. Wyeth's ACP is no longer being manufactured. [33]