From Wikipedia, the free encyclopedia
US Air Force base near Indian Springs, Nevada, United States

Creech Air Force Base is a United States Air Force (USAF) command and control facility in Clark County, Nevada used "to engage in daily Overseas Contingency Operations [2] …of remotely piloted aircraft systems which fly missions across the globe." [3] In addition to an airport, the military installation has the Unmanned Aerial Vehicle Battlelab, [4] associated aerial warfare ground equipment, and unmanned aerial vehicles of the type used in Afghanistan and Iraq. Creech is the aerial training site for the USAF Thunderbirds and "is one of two emergency divert airfields" for the Nevada Test and Training Range. [3]

In addition to the airfield, the base includes the "UAV-Logistic and Training Facility", [5] the Joint Unmanned Aerial Systems Center of Excellence, Silver Flag Alpha Regional Training Center, and other military units/facilities. The base is named in honor of retired US Air Force General Wilbur L. Creech, the former commanding officer of Tactical Air Command (TAC), the predecessor command of the current Air Combat Command (ACC).

After World War I, Nevada and other western inland states were surveyed by Capt. Lowell H. Smith and Sgt. William B. Whitefield for landing sites. [6] The United States Army Air Corps subsequently rented a large room in Reno, [6] and used the 1929 civilian airfield near Las Vegas (named " McCarran Field" c. 1935) for 1930s training flights. [7] A 1939 "western site board" reconnaissance was conducted near Tonopah for a practice range and in October 1940, Maj. David Schlatter surveyed the southwest United States for a military airfield [8] ( Executive Order 8578 [9] transferred a " 60 × 90-mile area at Tonopah to the War Department on 29 October 1940".) [7] Congressional appropriations of 19 November 1941 for the Commissioner of Public Roads to build "21 flight strips" along highways for "bombing ranges or for other specialized training" included inland airstrips. [7]:87 "Initially a "tent city" military training camp", construction of "Indian Springs Airport" permanent facilities began in March 1942, "and by February 1943 the camp was used as a divert field and as a base for air-to-air gunnery training." [3]

Ten protesters were arrested at Creech Air Force Base on 2 October 2019. The base is home to drone operators who pilot drones for both the U.S. military and the CIA in missions across Afghanistan and the Middle East. A week earlier drones had killed 30 civilian farmers in Afghanistan. [10]

Indian Springs Air Force Base was designated in August 1951 and in July 1952, jurisdiction transferred from Air Training Command [11] to the Air Force Special Weapons Center (AFSWC) of Air Research and Development Command (ARDC). As an AFSWC facility, [12] "Indian Springs AFB served as a support base for projects from Operation Ranger in 1951 to Operation Storax in 1962." [13] "The 4935th Air Base Squadron was activated to operate the base in accordance with ARDC General Order No. 39 on 16 July 1952". [12] The base's mission was to support United States Atomic Energy Commission (AEC) nuclear testing at the Nevada Proving Grounds, 30 mi (48 km) northwest, as well as Nellis AFB's operation of the Nellis Air Force Gunnery and Bombing Range. "At first fewer than 300 officers and enlisted men were stationed at Indian Springs AFB, but when testing began, the population grew to more than 1,500 personnel. The base also hosted more than 100 of the most modern aircraft in the world at the time." [14]

Operation Teapot
Indian Springs' support of Teapot nuclear tests included hosting media visits and "Official and Congressional Observer groups" e.g., "by agreement reached in January 1955" for flights from Washington. Aircrews at Indian Springs were briefed on weather for tests and when the " Yucca Lake airstrip" became flooded, "nuclear devices" were instead landed at the AFB until Yucca Lake "was completely dried out". AFSWC personnel at Indian Springs AFB provided "facilities and messing for observers and experimental groups, air freight terminal services, servicing for Department of Defense and project vehicles stationed at Indian Springs AFB and transient vehicles", and support of flights between Kirtland and Indian Springs. [15] (The 4925th Special Weapons Group conducted the "live test drops at Nevada" and flew through and sampled "highly radioactive nuclear "clouds" after explosions" [16]—the 4926th Test Squadron (Sampling)[ where?] also tested Nevada mushroom clouds. [17])

Det 1, AFSWC
Detachment 1, AFSWC had all six aircraft stationed at Indian Springs c. 1963 to support the Nevada Test Site by transporting personnel to/from Camp Mercury and Yucca Flats and to orbit/hover over selected underground tests while monitoring for radiation leaks. Ancillary missions were carried out including target marking at the nearby bombing range for the aircraft from Nellis AFB as well as searching for and retrieving weather balloons. In 1966, the unit replaced two Kaman HH-43 Huskie helicopters with two Bell UH-1F Huey utility helicopters.

During the 1970s and 1980s, the primary base mission was range maintenance and the primary unit was the 57th Combat Support Squadron of civil engineers—the only assigned aircraft unit was a detachment of Bell UH-1N Twin Huey helicopters (designated as "Det 1").

The 1982 Thunderbirds Indian Springs Diamond Crash killed all four Northrop T-38 Talon pilots impacting along the runway ( controlled flight into terrain). Around 1988 the bulk of Silver Flag Alpha moved to the Indian Springs Air Force Auxiliary Field from Nellis. [21] Indian Springs AFAF was designated a Formerly Used Defense Site by 30 September 2002. [22] In January 2005, No 1115 Flight was formed at the base to operate the Royal Air Force's first UAVs (became part of No. 39 Squadron RAF in March 2007).

An MQ-9 taxies on a Creech AFB runway

On 20 June 2005, Indian Springs Air Force Auxiliary Field officially changed its name to Creech Air Force Base in honor of Gen. Wilbur L. "Bill" Creech, the commander of Tactical Air Command from 1978 to 1984, [23] and activated in October 2005 the Joint Unmanned Aerial Systems Center of Excellence and the 3d Special Operations Squadron (the latter was the 1st MQ-1 Predator squadron in the Air Force Special Operations Command (AFSOC). The 42d Attack Squadron was formed at Creech AFB on 8 November 2006 as the first Reaper squadron. By 2007, Creech personnel of the 432nd Aircraft Maintenance Squadron had been deployed to Ali Air Base, [24] and the base transferred from a Nellis AFB unit to the 432d Wing when activated on 1 May 2007 [25] (renamed 432d Air Expeditionary Wing on 15 May 2008.) [3] On 5 March 2008, the 556th Test and Evaluation Squadron became operational as "the Air Force's [1st] test squadron for unmanned aerial systems". [26] In 2008 the USGS added the military installation to the Geographic Names Information System (the airport portion of the base was separately designated in 2011). [27]

A 2009 Nevada Desert Experience protest against drone attacks on Pakistan by the United States of America resulted in the convictions of the "Creech 14" (e.g., Father Louie Vitale, Kathy Kelly, and John Dear) arrested on the base [28] for trespassing and sentenced on 27 January 2011 for time served [29] (a 2009 protest was also held.) [30] In 2011, keystroke logging software had infected UAV ground stations[ where?] ("believed to have spread through...removable drives"), [31] [32] and the Twenty-Fourth Air Force was alerted to the problem by an article in Wired magazine. [33] (The virus "posed no threat to our operational mission".) [34] In 2012, the ceremony in which the 99th Security Forces Group "stands down" also activated the 799th Air Base Group at Creech. [35]

In July 2019, the 799th Air Base Group was deactivated and responsibility for base support operations transferred to the newly activated the 432nd Mission Support Group, part of the 432nd Wing. The change allowed the 432nd Wing to become installation command authority at Creech, representing a shift away from the base relying on nearby Nellis AFB for support. [36] 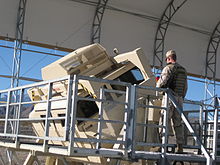 Creech is also home to the "Silver Flag Alpha Regional Training Center", operated by the 99th Ground Combat Training Squadron (99 GCTS). At Silver Flag Alpha, Security Forces airmen receive mission-specific training prior to being deployed to combat areas. [37] There are two basic courses taught at Silver Flag Alpha; the 17-day Base Security Operations Course which focuses on base defense from within the base boundary and the Area Security Operations Course for airmen whose deployment tasking includes "outside the wire" missions where the airmen leave the base perimeter to conduct various missions. [21] Military Working Dog handlers receive additional training along with attending one of the two Silver Flag Alpha courses. [21] Depending on the course the airmen may receive training on the following: [21]

Units marked GSU are Geographically Separate Units, which although based at Creech, are subordinate to a parent unit based at another location.

Author Stephen King presented the site as the base of military operations for the antagonist, in his novel The Stand. Creech was the site for the control of drone surveillance and Hellfire missile deployment in the 2015 film Eye in the Sky.

It most recently[ when?] appeared as a location for launching drone strikes in the third episode of Tom Clancy's Jack Ryan.