Crack epidemic in the United States

From Wikipedia, the free encyclopedia
(Redirected from Crack epidemic)
Drug epidemic in the 1980s and 90s 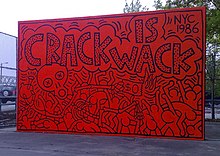 The "crack epidemic" in the United States was a surge of crack cocaine use in major cities across the United States between the early 1980s and the early 1990s. [1] This resulted in a number of social consequences, such as increasing crime and violence in American inner city neighborhoods, as well as a resulting backlash in the form of tough on crime policies. "Rocks" of crack cocaine, with a ruler (marked in inches) for reference

The name "crack" first appeared in the New York Times on November 17, 1985. Within a year more than a thousand press stories had been released about the drug. In the early 1980s, the majority of cocaine being shipped to the United States was landing in Miami, and originated in Colombia, trafficked through the Bahamas and Dominican Republic. [1] Soon there was a huge glut of cocaine powder in these islands, which caused the price to drop by as much as 80 percent. [1] Faced with dropping prices for their illegal product, drug dealers made a decision to convert the powder to "crack", a solid smokeable form of cocaine, that could be sold in smaller quantities, to more people. It was cheap, simple to produce, ready to use, and highly profitable for dealers to develop. [1] As early as 1981, reports of crack were appearing in Los Angeles, Oakland, San Diego, Miami, Houston, New York, and in the Caribbean. [1]

Initially, crack had higher purity than street powder. [2] Around 1984, powder cocaine was available on the street at an average of 55 percent purity for $100 per gram (equivalent to $246 in 2019), and crack was sold at average purity levels of 80-plus percent for the same price. [1] In some major cities, such as New York, Chicago, Los Angeles, San Francisco, Philadelphia, Baltimore, Houston and Detroit, one dose of crack could be obtained for as little as $2.50 (equivalent to $6 in 2019). [1]

Some scholars have cited the crack "epidemic" as an example of a moral panic, noting that the explosion in use and trafficking of the drug actually occurred after the media coverage of the drug as an "epidemic". [4]

Later, the epidemic died down, as a new generation avoided the drug after seeing its effects on the previous generation. [5]

In a study done by Roland Fryer, Steven Levitt, and Kevin Murphy, a crack index was calculated using information on cocaine-related arrests, deaths, and drug raids, along with low birth rates and media coverage in the United States. The crack index aimed to create a proxy for the percentage of cocaine related incidents that involved crack. Crack was an almost unknown drug until 1985. This abrupt introductory date allows for the estimation and use of the index with the knowledge that values prior to 1985 are zero.[ dubious – discuss] [6] This index showed that the Northeast U.S. was most affected by the crack epidemic. The U.S. cities with the highest crack index were New York, Newark and Philadelphia.

States and regions with concentrated urban populations were affected at a much higher rate, while states with primarily rural populations were least affected.[ citation needed] Maryland, New York and New Mexico had the highest instances of crack cocaine use, while Idaho, Minnesota and Vermont had the lowest instances of crack cocaine use.[ citation needed]

A 2018 study found that the crack epidemic had long-run consequences for crime, contributing to the doubling of the murder rate of young black males soon after the start of the epidemic, and that the murder rate was still 70 percent higher 17 years after crack's arrival. [12] The paper estimated that eight percent of the murders in 2000 are due to the long-run effects of the emergence of crack markets, and that the elevated murder rates for young black males can explain a significant part of the gap in life expectancy between black and white males. [12]

The reasons for these increases in crime were mostly because distribution of the drug to the end-user occurred mainly in low-income inner city neighborhoods. This gave many inner-city residents the opportunity to move up the "economic ladder" in a drug market that allowed dealers to charge a low minimum price.

Crack cocaine use and distribution became popular in cities that were in a state of social and economic chaos such as New York, Los Angeles and Atlanta. "As a result of the low-skill levels and minimal initial resource outlay required to sell crack, systemic violence flourished as a growing army of young, enthusiastic inner-city crack sellers attempt to defend their economic investment." [13] Once the drug became embedded in the particular communities, the economic environment that was best suited for its survival caused further social disintegration within that city.

In 1986, the U.S. Congress passed laws that created a 100 to 1 sentencing disparity for the possession or trafficking of crack when compared to penalties for trafficking of powder cocaine, [14] [15] [16] [17] which had been widely criticized as discriminatory against minorities, mostly African-Americans, who were more likely to use crack than powder cocaine. [18] This 100:1 ratio had been required under federal law since 1986. [19] Persons convicted in federal court of possession of 5 grams of crack cocaine received a minimum mandatory sentence of 5 years in federal prison. On the other hand, possession of 500 grams of powder cocaine carries the same sentence. [15] [16] In 2010, the Fair Sentencing Act cut the sentencing disparity to 18:1. [18]

In the year 2000, the number of incarcerated African Americans had become 26 times the amount it had been in 1983.[ citation needed]

In 2012, 88% of imprisonments from crack cocaine were African American. Further, the data shows the discrepancy between lengths of sentences of crack cocaine and heroin. The majority of crack imprisonments are placed in the 10–20 year range, while the imprisonments related to heroin use or possession range from 5–10 years which has led many to question and analyze the role race plays in this disparity. [20]

In 2007, Memphis black writer Demico Boothe, who spent 12 years in federal prison after being arrested for the first-time offense of selling crack cocaine at the age of 18, published the book, "Why Are So Many Black Men in Prison?" The book makes the same essential charges that are made in the better-known book published five years later by Michelle Alexander, cited below. [21]

Writer and lawyer Michelle Alexander's book The New Jim Crow: Mass Incarceration in the Age of Colorblindness argues that punitive laws against drugs like crack cocaine adopted under the Reagan Administration's War on drugs resulted in harsh social consequences, including large numbers of young black men imprisoned for long sentences, the exacerbation of drug crime despite a decrease in illegal drug use in the United States, increased police brutality against the black community resulting in injury and death for many black men, women, and children. [22]

According to Alexander, society turned into a racist criminal justice system to avoid exhibiting obvious racism. Since African Americans were the majority users of crack cocaine, it provided a platform for the government to create laws that were specific to crack. This was an effective way to imprison black people without having to do the same to white Americans. Thus, there was a discourse of African Americans and a perpetuated narrative about crack addiction that was villainous and problematic. The criminalizing of African American crack users was portrayed as dangerous and harmful to society.

Alexander writes that felony drug convictions for crack cocaine fell disproportionately on young black men, who then lost access to voting, housing, and employment opportunities. These economic setbacks led to increased violent crime in poor black communities as families did what they had to do to survive.

Alexander explains the process of someone who is caught with crack: first, the arrest and the court hearing that will result in jail or prison-time. Second, the aftermath of permanent stigmas attached to someone who has done jail-time for crack, like being marked a felon on their record. This affects job opportunity, housing opportunity, and creates obstacles for people who are left with little motivation to follow the law, making it more likely that they will be arrested again.

The United States Department of Justice Office of the Inspector General rejected Webb's claim that there was a "systematic effort by the CIA to protect the drug trafficking activities of the Contras". The DOJ/OIG reported: "We found that Blandon and Meneses were plainly major drug traffickers who enriched themselves at the expense of countless drug users and the communities in which these drug users lived, just like other drug dealers of their magnitude. They also contributed some money to the Contra cause. But we did not find that their activities were the cause of the crack epidemic in Los Angeles, much less in the United States as a whole, or that they were a significant source of support for the Contras." [24]