From Wikipedia, the free encyclopedia
Salt-cured beef product
For the canned product known as corned beef in the United Kingdom and Ireland, see Bully beef.

Corned beef is salt-cured brisket of beef. [1] The term comes from the treatment of the meat with large-grained rock salt, also called "corns" of salt. Sometimes, sugar and spices are also added to corned beef recipes. Corned beef is featured as an ingredient in many cuisines.

Most recipes include nitrates, which convert the natural myoglobin in beef to nitrosomyoglobin, giving it a pink color. Nitrates and nitrites reduce the risk of dangerous botulism during curing by inhibiting the growth of Clostridium botulinum bacteria spores, [2] but have been shown to be linked to increased cancer risk. [3] Beef cured without nitrates or nitrites has a gray color, and is sometimes called "New England corned beef". [4]

Corned beef was a popular meal throughout numerous wars, including World War I, World War II, during which fresh meat was rationed. It also remains popular worldwide as an ingredient in a variety of regional, national or foreign dishes, and as a common part in modern field rations of various armed forces across the world.

Although the exact beginnings of corned beef are unknown, it most likely came about when people began preserving meat through salt-curing. Evidence of its legacy is apparent in numerous cultures, including ancient Europe and the Middle East. [5] The word corn derives from Old English and is used to describe any small, hard particles or grains. [6] In the case of corned beef, the word may refer to the coarse, granular salts used to cure the beef. [5] The word "corned" may also refer to the corns of potassium nitrate, also known as saltpeter, which were formerly used to preserve the meat. [7] [8] [9] 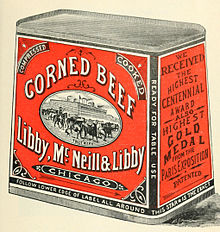 Although the practice of curing beef was found locally in many cultures, the industrial production of corned beef started in the British Industrial Revolution. Irish corned beef was used and traded extensively from the 17th century to the mid-19th century for British civilian consumption and as provisions for the British naval fleets and North American armies due to its nonperishable nature. [10] The product was also traded to the French for use in Caribbean sugar plantations as sustenance for the colonists and the slave laborers. [11] The 17th-century British industrial processes for corned beef did not distinguish between different cuts of beef beyond the tough and undesirable parts such as the beef necks and shanks. [11] [12] Rather, the grading was done by the weight of the cattle into "small beef", "cargo beef", and "best mess beef", the former being the worst and the latter the best. [11] Much of the undesirable portions and lower grades were traded to the French, while better parts were saved for British consumption or shipped to British colonies. [11]

Ireland produced a significant amount of the corned beef in the Atlantic trade from local cattle and salt imported from the Iberian Peninsula and southwestern France. [11] Coastal cities, such as Dublin, Belfast, and Cork, created vast beef curing and packing industries, with Cork producing half of Ireland's annual beef exports in 1668. [12] Although the production and trade of corned beef as a commodity was a source of great wealth for the colonial nations of Britain and France (which were participating in the Atlantic slave trade), in the colonies themselves, the product was looked upon with disdain due to its association with poverty and slavery. [11]

Increasing corned beef production to satisfy the rising populations of the industrialised areas of Great Britain and Atlantic trade worsened the effects of the Irish Famine and the Great Potato Famine:

The Celtic grazing lands of ... Ireland had been used to pasture cows for centuries. The British colonized ... the Irish, transforming much of their countryside into an extended grazing land to raise cattle for a hungry consumer market at home ... The British taste for beef had a devastating impact on the impoverished and disenfranchised people of ... Ireland. Pushed off the best pasture land and forced to farm smaller plots of marginal land, the Irish turned to the potato, a crop that could be grown abundantly in less favorable soil. Eventually, cows took over much of Ireland, leaving the native population virtually dependent on the potato for survival.

Despite being a major producer of beef, most of the people of Ireland during this period consumed little of the meat produced, in either fresh or salted form, due to its prohibitive cost. This was because most of the farms and its produce were owned by wealthy Anglo-Irish who were absentee landlords and that most of the population were from families of poor tenant farmers, and that most of the corned beef was exported.

The lack of beef or corned beef in the Irish diet is especially true in the north of Ireland and areas away from the major centres for corned beef production. However, individuals living in these production centres such as Cork did consume the product to a certain extent. The majority of Irish who resided in Ireland at the time mainly consumed dairy products and meats such as pork or salt pork, [12] bacon and cabbage being a notable example of a traditional Irish meal. 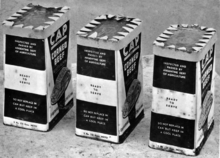 In North America, corned beef dishes are associated with traditional Irish cuisine. However, considerable debate remains about the association of corned beef with Ireland. Mark Kurlansky, in his book Salt, states that the Irish produced a salted beef around the Middle Ages that was the "forerunner of what today is known as Irish corned beef" and in the 17th century, the English named the Irish salted beef "corned beef". [15]

Some say until the wave of 19th-century Irish immigration to the United States, many of the ethnic Irish had not begun to consume corned beef dishes as seen today. The popularity of corned beef compared to bacon among the immigrant Irish may have been due to corned beef being considered a luxury product in their native land, while it was cheaply and readily available in America. [12]

The Jewish population produced similar salt-cured meat from beef brisket. Irish immigrants often purchased it as corned beef from Jewish butchers. This exchange was an example of the close interactions in everyday life of people from these two cultures in the United States' main 19th- and 20th-century immigrant port of entry, New York City. [12] [16]

Canned corned beef has long been one of the standard meals included in military field ration packs around the world, due to its simplicity and instant preparation in such rations. One example is the American Meal, Ready-to-Eat (MRE) pack. Astronaut John Young snuck a contraband corned beef sandwich on board Gemini 3, hiding it in a pocket of his spacesuit. [17] 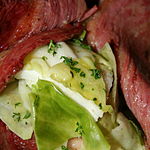 In the United States and Canada, corned beef typically comes in two forms: a cut of beef (usually brisket, but sometimes round or silverside) cured or pickled in a seasoned brine; or cooked and canned.

Corned beef is often purchased ready to eat in delicatessens. It is the key ingredient in the grilled Reuben sandwich, consisting of corned beef, Swiss cheese, sauerkraut, and Thousand Island or Russian dressing on rye bread. Smoking corned beef, typically with a generally similar spice mix, produces smoked meat (or " smoked beef") such as pastrami or Montreal-style smoked meat.

Corned beef hash with potatoes is commonly served with eggs for breakfast.

In both the United States and Canada, corned beef is sold in cans in minced form. It is also sold this way in Puerto Rico and Uruguay.

Corned beef was used as a substitute for bacon by Irish immigrants in the late 19th century. [20] Corned beef and cabbage is the Irish-American variant of the Irish dish of bacon and cabbage. A similar dish is the New England boiled dinner, consisting of corned beef, cabbage, and root vegetables such as carrots, turnips, and potatoes, which is popular in New England and another similar dish, Jiggs dinner, is popular in parts of Atlantic Canada.

The appearance of corned beef in Irish cuisine dates to the 12th century in the poem Aislinge Meic Con Glinne or The Vision of MacConglinne. [22] Within the text, it is described as a delicacy a king uses to purge himself of the "demon of gluttony". Cattle, valued as a bartering tool, were only eaten when no longer able to provide milk or to work. The corned beef as described in this text was a rare and valued dish, given the value and position of cattle within the culture, as well as the expense of salt, and was unrelated to the corned beef eaten today. [23]

Multiple Caribbean nations have their own varied versions of canned corned beef as a dish, common in Puerto Rico, Jamaica, Barbados, and elsewhere. [24] With cans being less perishable, it's an effective food to import to tropical islands that will keep, despite the heat and humidity. Corned beef is a cheap, quick, and familiar low-effort comfort food that might be prepared for any meal of the day. As with other cuisines, cooks often improvise to add extra flavouring components (usually what they have around or left over) to their corned beef, including: onions, garlic, ketchup, black pepper, salt, oil (or other fat), corn, potatoes, tomatoes, cabbage, carrots, beans, hot and/or bell peppers, etc. It's very often served with a starch, such as rice, roti, bread, or potatoes. Due to its simplicity, many Caribbean children grow up thinking fondly of this dish.

In Israel, a canned corned beef called Loof was the traditional field ration of the Israel Defense Forces until the product's discontinuation in 2011. The name Loof derives from "a colloquially corrupt short form of 'meatloaf.'" [25] Loof was developed by the IDF in the late 1940s as a kosher form of bully beef, while similar canned meats had earlier been an important component of relief packages sent to Europe and Palestine by Jewish organizations such as Hadassah. [25]

In New Zealand, both the canned and fresh varieties are referred to as corned beef; fresh corned beef is almost always made with silverside; 'silverside' and 'corned beef' are often used interchangeably. Canned corned beef is especially popular among New Zealand's Polynesian community, as in pacific island nations such as Western Samoa and Tonga.

Corned beef has also become a common dish in Hong Kong cuisine, though it has been heavily adapted in style and preparation to fit local tastes. It is often served with other 'Western' fusion cuisine at cha chaan teng and other cheap restaurants catering to locals. Like most localized 'Western' food in East Asia, trade, imperialism, and war played roles in bringing and popularizing corned beef in Hong Kong.

In the Philippines, corned beef is typically made from shredded beef or buffalo meat, and is almost exclusively sold in cans. It is boiled, shredded, canned, and sold in supermarkets and grocery stores for mass consumption. It is usually served fried, mixed with onions and garlic, with a side of Sinangag (garlic fried rice), and a fried egg. Along with other canned meats, canned corned beef is a popular breakfast staple in the Philippines. [26] [27] As such, meat processing companies such as CDO Foodsphere and San Miguel Food and Beverage all exist to cater to the high demand.

Carne norte (alternative spelling: karne norte) is another term that is used to describe Philippine corned beef. Literally translating to "Northern meat" in Spanish, the term is ideally applied to any corned beef recipe that comes from places such as Ilocos Norte and La Union, or any other province situated in the Northern part of Luzon, a main island in the Northern part of the country. Nowadays, little distinction can be made between carne norte and typical canned corned beef that can be bought in many supermarkets. In recent times, it has mostly been used as a marketing tool by canned corned beef brands, either to highlight their company's "authentic" Northern roots or help their product stand out from the plethora of other brands that produce corned beef.