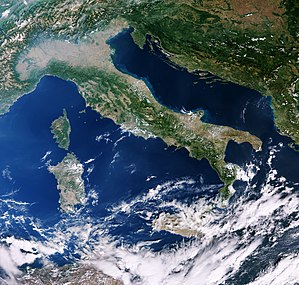 The Italy and Mediterranean, image captured by Copernicus Sentinel-3A on 28 September 2016.

Copernicus is the European Union's Earth observation programme coordinated and managed by the European Commission in partnership with the European Space Agency (ESA), the EU Member States and EU Agencies. [1]

It aims at achieving a global, continuous, autonomous, high quality, wide range Earth observation capacity. Providing accurate, timely and easily accessible information to, among other things, improve the management of the environment, understand and mitigate the effects of climate change, and ensure civil security. [2]

The objective is to use vast amount of global data from satellites and from ground-based, airborne and seaborne measurement systems to produce timely and quality information, services and knowledge, and to provide autonomous and independent access to information in the domains of environment and security on a global level in order to help service providers, public authorities and other international organizations improve the quality of life for the citizens of Europe. In other words, it pulls together all the information obtained by the Copernicus environmental satellites, air and ground stations and sensors to provide a comprehensive picture of the "health" of Earth.

One of the benefits of the Copernicus Programme is that the data and information produced in the framework of Copernicus are made available free-of-charge [3] to all its users and the public, thus allowing downstream services to be developed.

Its cost during 1998 to 2020 are estimated at 6.7 billion euros with around €4.3bn spent in the period 2014 to 2020 and shared between the EU (66%) and ESA (33%) with benefits of the data to the EU economy estimated at roughly 30 billion euros through 2030. [5] ESA as a main partner has performed much of the design and oversees and co-funds the development of Sentinel missions 1, 2, 3, 4, 5 and 6 with each Sentinel mission consisting of at least 2 satellites and some, such as Sentinel 1, consisting of 4 satellites. [6] They will also provide the instruments for Meteosat Third Generation and MetOp-SG weather satellites of EUMETSAT where ESA and EUMETSAT will also coordinate the delivery of data from upwards of 30 satellites that form the contributing satellite missions to Copernicus. [7]

Over a few decades, European and national institutions have made substantial R&D efforts in the field of Earth observation. These efforts have resulted in tremendous achievements but the services and products developed during this period had limitations that were inherent to R&D activities (e.g. lack of service continuity on the long-term). The idea for a global and continuous European earth observation system was developed under the name of Global Monitoring for Environment and Security (GMES) which was later re-branded into Copernicus after the EU became directly involved in financing and development. It follows and greatly expands on the work of the previous 2.3 billion euros European Envisat program which operated from 2002 to 2012.

ESA is currently developing seven missions under the Sentinel programme (Sentinel 1, 2, 3, 4, 5P, 5, 6). The Sentinel missions include radar and super-spectral imaging for land, ocean and atmospheric monitoring. Each Sentinel mission is based on a constellation of two satellites to fulfill and revisit the coverage requirements for each mission, providing robust datasets for all Copernicus services. The Sentinel missions will have the following objectives:

In preparation for the second-generation of Copernicus (Copernicus2.0), six High Priority Candidate "expansion" missions are currently being studied by ESA to address EU Policy and gaps in Copernicus user needs, and to increase the current capabilities of the Copernicus Space Component:

GMES In-Situ Coordination (GISC). GISC is a FP7 funded initiative, will last for three years (January 2010 – December 2012) and is coordinated by the European Environment Agency (EEA).

In-situ data are all data from sources other than Earth observation satellites. Consequently, all ground-based, air-borne, and ship/buoy-based observations and measurements that are needed to implement and operate the Copernicus services are part of the in-situ component. In-situ data are indispensable; they are assimilated into forecasting models, provide calibration and validation of space-based information, and contribute to analysis or filling gaps not available from space sources.

GISC objectives will be achieved by:

GISC is undertaken with reference to other initiatives, such as INSPIRE (Infrastructure for Spatial Information in Europe) and SEIS (Shared Environmental Information System) as well as existing coordination and data exchange networks. The coordinated access to data will retain the capacity to link directly data providers and the service providers because it is based on the principles of SEIS and INSPIRE. The implementation of INSPIRE is embedded in the synergies and meta-data standards that are used in GISC. Data and information will aim to be managed as close as possible to its source in order to achieve a distributed system, by involving countries and existing capacities that maintain and operate the required observation infrastructure.

The development of the pre-operational version of the services has been realised by a series of projects launched by the European Commission and partly funded through the EU's 7th Framework Programme (FP7). These projects were geoland2 (land), MyOcean (marine), SAFER (emergency response), MACC and its successor MACC II (atmosphere) and G-MOSAIC (security). Most of these projects also contributed to the monitoring of Climate Change.

"The information provided by the Copernicus services can be used by end-users for a wide range of applications in a variety of areas. These include urban area management, sustainable development and nature protection, regional and local planning, agriculture, forestry and fisheries, health, civil protection, infrastructure, transport and mobility, as well as tourism." [4]

Some Copernicus services make use of OpenStreetMap data in their maps production. [26]

Other initiatives will also facilitate the development and functioning of Copernicus services:

Copernicus is one of three related initiatives that are the subject of the GIGAS ( GEOSS, INSPIRE and GMES an Action in Support) harmonization and analysis project [27] under the auspices of the EU 7th Framework Programme. [28]