From Wikipedia, the free encyclopedia
technique to reduce potential fuel for wildfire through managed burning
"Back-burn" redirects here. For the village in Scotland, see Backburn. 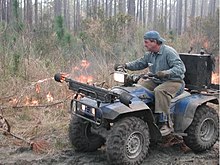 Firing the woods in a South Carolina forest with a custom made driptorch mounted on an ATV. The device spits flaming fuel oil from the side, instantly igniting the leaf litter. 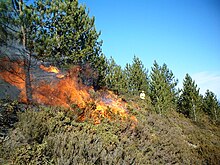 A prescribed burn in a Pinus nigra stand in Portugal

Controlled burning of a field outside of Statesboro, Georgia, United States, in preparation for spring planting 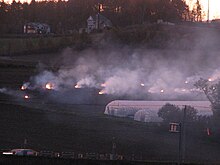 A controlled or prescribed burn, also known as hazard reduction burning, [1] backfire, swailing, or a burn-off, [2] is a fire set intentionally for purposes of forest management, farming, prairie restoration or greenhouse gas abatement. A controlled burn may also refer to the intentional burning of slash and fuels through burn piles. [3] Fire is a natural part of both forest and grassland ecology and controlled fire can be a tool for foresters.

Hazard reduction or controlled burning is conducted during the cooler months to reduce fuel buildup and decrease the likelihood of serious hotter fires. [4] Controlled burning stimulates the germination of some desirable forest trees, and reveals soil mineral layers which increases seedling vitality, thus renewing the forest. Some cones, such as those of lodgepole pine and sequoia, are serotinous, as well as many chaparral shrubs, meaning they require heat from fire to open cones to disperse seeds.

In industrialized countries, controlled burning is usually overseen by fire control authorities for regulations and permits.

There are two basic causes of wildfires. One is natural (lightning) and the other is people. [5] Controlled burns have a long history in wildland management. Pre-agricultural societies used fire to regulate both plant and animal life. Fire history studies have documented periodic wildland fires ignited by indigenous peoples in North America and Australia. [6] [7]

Fires, both naturally caused and prescribed, were once part of natural landscapes in many areas. These practices ended in the early 20th century when US fire policies were enacted with the goals of suppressing all fires. [7] Since 1995, the US Forest Service has slowly incorporated burning practices into its forest management policies. [8]

Back burning is the term given to the process of lighting vegetation in such a way that it has to burn against the prevailing wind. This produces a slower moving and more controllable fire. However this term is also colloquially used to mean all of controlled burning as well.

This process is commonly used for hazard reduction burns and the preparation of fire breaks to enable controlled/ hazard reduction burns. Back burning involves starting small fires along a man-made or natural firebreak in front of a main fire front. [9] Back burning reduces the amount of fuel that is available to the main fire by the time that it reaches the burnt area.

Back burning is utilized in controlled burning and during wildfire events. While controlled burns utilize back burning during planned fire events to create a "black line", back burning or backfiring is also done to stop a wildfire that is already in progress. Firebreaks are also often used as an anchor point to start a line of fires along natural or manmade features such as a river, road or a bulldozed clearing. [10] It is called back burning because the small fires are designed to "burn back" towards the main fire front and are usually burning and traveling against ground level winds.

Another consideration is the issue of fire prevention. In Florida, during the drought in 1995, catastrophic wildfires burned numerous homes. But forestry managers in the Florida Division of Forestry noted that the underlying problem was previous cessation of controlled burning, resulting from complaints by homeowners.[ citation needed] Each year additional leaf litter and dropped branches increased the likelihood of a hot and uncontrollable fire. [11]

Controlled burns are sometimes ignited using a tool known as the driptorch, which allows a steady stream of flaming fuel to be directed to the ground as needed. Variations on the driptorch can be used such as the helitorch, which is mounted on a helicopter, or other improvised devices such as mounting a driptorch-like device on the side of a vehicle. A pyrotechnic device known as a fusee can be used for ignition in nearby fuels while a Very pistol can be for fuels farther away.

For the burning of slash, waste materials left over from logging, there are several types of controlled burns. Broadcast burning is the burning of scattered slash over a wide area. Pile burning is gathering up the slash into piles before burning. These burning piles may be referred to as bonfires. High temperatures can harm the soil, damaging it physically, chemically or sterilizing it. Broadcast burns tend to have lower temperatures and will not harm the soil as much as pile burning, [12] though steps can be taken to treat the soil after a burn. In lop and scatter burning, slash is left to compact over time, or is compacted with machinery. This produces a lower intensity fire, as long as the slash is not packed too tightly. [12] However, soil may be damaged if machinery is used to compress the slash.

Controlled burning reduces fuels, may improve wildlife habitat, [13] controls competing vegetation, improves short term forage for grazing, improves accessibility, helps control tree disease, and perpetuates fire dependent species. [14] In mature longleaf pine forest, it helps maintain habitat for endangered red-cockaded woodpeckers in their sandhill and flatwoods habitats. [15] Fire is also felt to be a crucial element of the recovery of the threatened Louisiana pine snake in the longleaf pine forests of central Louisiana and eastern Texas. [16] However, many scientists[ who?] disagree with such a simplistic approach, and indicate that each forest must be assessed on its own merit.[ citation needed]

In the wild, many trees depend on fire as a successful way to clear out competition and release their seeds. In particular, the giant sequoia depends on fire to reproduce: the cones of the tree open after a fire releases their seeds, the fire having cleared all competing vegetation. Due to fire suppression efforts during the early and mid 20th century, low-intensity fires no longer occurred naturally in many groves, and still do not occur in some groves today. The suppression of fires also led to ground fuel build-up and the dense growth which posed the risk of catastrophic wildfires. It wasn't until the 1970s that the National Park Service began systematic fires for the purpose of new seed growth.[ citation needed] Eucalyptus regnans or mountain ash of Australia also depends on fire but in a different fashion. They carry their seeds in capsules which can deposit at any time of the year. Being flammable, during a fire the capsules drop nearly all of their seeds and the fire consumes the eucalypt adults, but most of the seeds survive using the ash as a source of nutrients; at their rate of growth, they quickly dominate the land and a new eucalyptus forest grows. [17]

In addition to forest management, controlled burning is also used in agriculture. In the developing world, this is often referred to as slash and burn. In industrialized nations, it is seen as one component of shifting cultivation, as a part of field preparation for planting. Often called field burning, this technique is used to clear the land of any existing crop residue as well as kill weeds and weed seeds. Field burning is less expensive than most other methods such as herbicides or tillage, but because it produces smoke and other fire-related pollutants, its use is not popular in agricultural areas bounded by residential housing.[ citation needed]

In the United States, field burning is a legislative and regulatory issue at both the federal and state levels of government.

In the north of Great Britain, large areas of grouse moors are managed by burning. This kills trees and grasses, preventing natural succession, and generates the mosaic of ling (heather) of different ages which allows very large populations of red grouse to be reared for shooting. [18]

In Oregon, field burning has been widely used by grass seed farmers as a method for clearing fields for the next round of planting, as well as revitalizing serotinous grasses that require fire in order to grow seed again. The Oregon Department of Environmental Quality began requiring a permit for farmers to burn their fields in 1981, but the requirements became stricter in 1988 following a multi-car collision [19] in which smoke from field burning near Albany, Oregon, obscured the vision of drivers on Interstate 5, leading to a 23-car collision in which 5 people died and 37 were injured. [20] This resulted in more scrutiny of field burning and proposals to ban field burning in the state altogether. [21] [22] [23]

In the European Union burning crop stubble after harvest is used by farmers for plant health reasons under several restrictions in the cross compliance regulations. [24]

British grouse moors have been described as not just precluding birds of prey, but also preventing wildness, natural landscapes, and ecotourism. [25]:167

The conflict of controlled burn policy in the United States has roots in the historical campaigns to combat wildfires and to the eventual acceptance of fire as a necessary ecological phenomenon. The notion of fire as a tool had somewhat evolved by the late 1970s as the National Park Service authorized and administered controlled burns. [26] While the methodology was still relatively emergent the Yellowstone fires of 1988 struck, which significantly politicized fire management. The ensuing media coverage was a spectacle that was vulnerable to misinformation. Reports drastically inflated the scale of the fires which disposed politicians in Wyoming, Idaho, and Montana to believe that all fires represented a loss of revenue from tourism. [26] Partially as a result of millions of dollars lost in estimates, stricter data recording was enforced and thresholds were established for determining which fires must be suppressed. [27] Paramount to the new action plans is the suppression of fires that threaten the loss of human life with leniency toward areas of historic, scientific, or special ecological interest. [28] Since 1988, many states have made progress toward controlled burns but with a proclivity toward forgetfulness between fire events. Senators Ron Wyden and Mike Crapo of Oregon and Idaho have been moving to reduce the shifting of capital from fire prevention to fire suppression following the harsh fires of 2017 in both states. [29]

Depending on the context and goals of a prescribed fire, additional planning may be necessary. While the most common driver of fuel treatment is the prevention of loss of human life, certain parameters can also be changed to promote biodiversity and to rearrange stand ages appropriately. The risk of fatal fires can also be reduced proactively by reducing ground fuels before they can create a fuel ladder and begin an active crown fire. Predictions show thinned forests lead to mitigated fire intensity and flame length compared to untouched or fire-proofed areas. [30] Furthermore, low-intensity fire treatments can be administered in places where mechanized treatments such as disc harrowing cannot. [31] In the interests of conservation, electing for a mixed mosaic of unburnt islands within the targeted area maintains biodiversity and provides cover for wildlife. Because of this, some suggest fuel reductions of about 75% to be sufficient, though each burn plan should have its own target set by ecological and management goals. [32] In some areas where grasses and herbaceous plants thrive, species variation and cover can drastically increase a few years after fuel treatments. [33]

Controlled burns on Australian savannas can result in an overall reduction of greenhouse gas emissions. One working example is the West Arnhem Fire Management Agreement, started to bring "strategic fire management across 28,000 square kilometres (11,000 sq mi) of Western Arnhem Land" to partially offset greenhouse gas emissions from a liquefied natural gas plant in Darwin, Australia. Deliberately starting controlled burns early in the dry season results in a mosaic of burnt and unburnt country which reduces the area of stronger, late dry season fires. [35] Also known as "patch burning". To minimise the impact of smoke, burning should be restricted to daylight hours whenever possible. [36]