From Wikipedia, the free encyclopedia
A dolphin in the genus Tursiops
This article is about the species of dolphin. For the genus of dolphin, see Bottlenose dolphin.

The common bottlenose dolphin is the most familiar dolphin species due to the wide exposure it receives in captivity in marine parks and dolphinaria, and in movies and television programs. [4] It is the largest species of the beaked dolphins. [5] It inhabits temperate and tropical oceans throughout the world, and is absent only from polar waters. [4] [5] [6] [2] [7] Until recently, all bottlenose dolphins were considered as a single species, but now the Indo-Pacific bottlenose dolphin [2] [7] and Burrunan dolphin have been split from the common bottlenose dolphin. [3] [8] While formerly known simply as the bottlenose dolphin, this term is now applied to the genus Tursiops as a whole. [1] [9] [10] These dolphins inhabit warm and temperate seas worldwide. As considerable genetic variation has been described among members of this species, even between neighboring populations, many experts consider that additional species may be recognized. [3] [9]

A close-up of the head

Like all whales and dolphins, though, the snout is not a functional nose; the nose has instead evolved into the blowhole on the top of their heads. Their necks are more flexible than other dolphins' due to five of their seven vertebrae not being fused together as is seen in other dolphin species. [12]

The common bottlenose dolphin has a bigger brain than humans. [13] Numerous investigations of bottlenose dolphin intelligence include tests of mimicry, use of artificial language, object categorization, and self-recognition. [14] [15] [16] [17] [18] [19] This intelligence has driven considerable interaction with humans. The common bottlenose dolphin is popular in aquarium shows and television programs such as Flipper. [20] It has also been trained for military uses such as locating sea mines or detecting and marking enemy divers, as for example in the U.S. Navy Marine Mammal Program. [21] [22] In some areas, they cooperate with local fishermen by driving fish toward the fishermen and eating the fish that escape the fishermen's nets. [23] 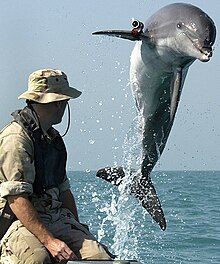 K-Dog, trained by the US Navy to find mines and boobytraps underwater, leaping out of the water

As a very social species, the common bottlenose dolphin lives in groups called pods that typically number about 15 individuals, but group size varies from pairs of dolphins to over 100 or even occasionally over 1,000 animals for short periods of time. [9] The types of groups include: nursery groups, juvenile groups, and groups of adult males. [5]

Its diet consists mainly of eels, squid, shrimp and a wide variety of fishes. [1] [6] It does not chew its food, instead swallowing it whole. Dolphin pods often work as a team to harvest schools of fish, though they also hunt individually. Dolphins search for prey primarily using echolocation, which is a form of sonar.

Research indicates that the type and range of fish in a dolphin's diet can have a significant impact on its health and metabolism. [24]

Dolphins also use sound for communication, including squeaks emitted from the blowhole, whistles emitted from nasal sacs below the blowhole, and sounds emitted through body language, such as leaping from the water and slapping their tails on the water. Their heads contain an oily substance that both acts as an acoustic lens and protects the brain case. They emit clicking sounds and listen for the return echoes to determine the location and shape of nearby items, including potential prey. [25]

A female bottlenose dolphin with two young at side at the Inner Moray Firth, Scotland

The common bottlenose dolphin can be found in the temperate, subtropical and tropical oceans worldwide. [34] The global population has been estimated at 600,000. [35] Some bottlenose populations live closer to the shore (inshore populations) and others live further out to sea (offshore populations). Generally, offshore populations are larger, darker, and have proportionally shorter fins and beaks. Offshore populations can migrate up to 4,200 km (2,600 mi) in a season, but inshore populations tend to move less. However, some inshore populations make long migrations in response to El Niño events. [9] The species has occurred as far as 50° north in eastern Pacific waters, possibly as a result of warm water events. [36] The coastal dolphins appear to adapt to warm, shallow waters. It has a smaller body and larger flippers, for maneuverability and heat dispersal. They can be found in harbors, bays, lagoons and estuaries. Offshore dolphins, however, are adapted to cooler, deeper waters. Certain qualities in their blood suggest they are more suited to deep diving. Their considerably larger body protects them against predators and helps them retain heat. [37]

Five dolphins jumping in a show

The dolphin watching in the ocean at south of Cape May, New Jersey

Some interactions with humans are harmful to the dolphins. Dolphin hunting industry exists in multiple countries including Japan, where common bottlenose dolphins are hunted for food annually in the town of Taiji, [38] and the Faroe Islands. Also, dolphins are sometimes killed inadvertently as a bycatch of tuna fishing. [39] [40]

Tião was a well-known solitary male bottlenose dolphin that was first spotted in the town of São Sebastião in Brazil around 1994 and frequently allowed humans to interact with him. The dolphin later became infamous for killing a swimmer and injuring many others, which earned it the nickname of killer dolphin.

The bronze statue of "Fungie" at the Dingle, Ireland

Fungie is another solitary male bottlenose, living in close contact with humans in Dingle harbour, Ireland, since 1983. He has become a symbol of the town, although some doubt exists over whether he is a single dolphin. [41]

The North Sea, Baltic, Mediterranean and Black Sea populations of the common bottlenose dolphin are listed in Appendix II [42] to the Convention on the Conservation of Migratory Species of Wild Animals (CMS) of the Bonn Convention, since they have an unfavorable conservation status or would benefit significantly from international cooperation organized by tailored agreements. [43]

Estimated population of a few specific areas are including: [2]

Common bottlenose dolphins are the most common apex predators found in coastal and estuarine ecosystems along the southern coast of the US, [46] thus serve as an important indicator species of bioaccumulation and health of the ecosystem.

It is believed that some diseases commonly found in dolphins are related to human behaviors, such as water pollution. Water pollution is linked to point and non-point source pollution. Point source pollution comes from a single source such as an oil spill [47] and/or chemical discharge from a specific facility. The environmental impact of the Deepwater Horizon oil spill caused a direct impact and still serves as a long term impact of future populations. Common bottlenose dolphins use these important habitats for calving, foraging, and feeding. Environmental impacts or changes from chemicals or marine pollution can alter and disrupt endocrine systems, affecting future populations. For example, oil spills have been related to lung and reproductive diseases in female dolphins. A recent study [48]suggested signs of lung disease and impaired stress in 32 dolphins that were captured and assessed in Barataria Bay, Louisiana, US. Out of these 32 dolphins, 10 were found pregnant and, upon a 47-month check up, only 20% produced feasible calves, compared to a previous success rate of 83%, in the same area. It is believed that a recent oil spill in this area is partially to blame for these severely low numbers.

Dense human development along the eastern coast of Florida and intense agricultural activity have resulted in increased freshwater inputs, changes in drainage patterns, and altered water quality (i.e. chemical contamination, high nutrient input, decreased salinity, decreased sea grass habitat, and eutrophication. [49] High nutrient input from agriculture chemicals and fertilizers causes eutrophication [50] and hypoxia, causing a severe reduction in water quality. Excess of phosphorus and nitrogen from these non-point sources deplete the natural cycle of oxygen by overconsumption of algae. Harmful algal blooms are responsible for dead zones and unusual mortality events of common bottlenose dolphins consuming these toxic fish from the brevetoxin produced by the dinoflagellate Karenia brevis. [51] Brevetoxins are neurotoxins that can cause acute respiratory and neurological symptoms, including death, in marine mammals, sea turtles, birds, and fishes. [52]