From Wikipedia, the free encyclopedia
City in Honduras

Comayagua (Spanish pronunciation:  [komaˈʝaɣwa]) is a city in Honduras, some 80 kilometres (50 miles) northwest of Tegucigalpa on the highway to San Pedro Sula and 594 metres (1,949 feet) above sea level.

The accelerated growth experienced by the city of Comayagua led the municipal authorities to structure a territorial reorganization plan. Between the years of 1945 -1975 the population of the city quadrupled due to the high rate of population growth achieved at that time (4.8%) and to migratory movements in the interior of the country. In 2015 the estimated population was 152,051. It is the capital of the Comayagua department of Honduras and it is noted for its wealth of Spanish Colonial architecture. The central square has a cathedral with the oldest clock in the Americas.[ citation needed] 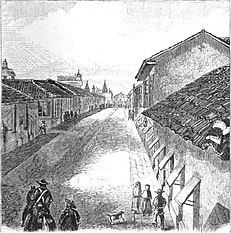 Comayagua during the XVII century

During the Pre-Columbian era the valley in which the city is located was populated by Lenca people. During the colonization Comayagua was founded with the name Santa María de la Nueva Valladolid by Conquistador Alonso de Cáceres under orders from Francisco de Montejo, Governor of Yucatán on 8 December 1537. The complementary names «Valladolid» or «Pais de las Higueras» were those given to it by the Spaniards but it kept the primitive of the place that is purely indigenous. Some differ in their etymology but most agree that it is composed of "Coma" (which in Lenca dialect means paramo) and "water" being its true meaning "páramo abundant with water". From 1540 on Comayagua was the capital of the Honduras Province of the Captaincy General of Guatemala.

Comayagua has become a major tourist center in the country along with the ruins of Copan, the beaches of the north coast and the bay Islands, due to the various buildings with historical value and the businesses that have prospered in recent years. since a city restoration policy was started to make it more attractive. Currently, the city of Comayagua has a territorial extension of 831.9 km². This city is located in the valley of the same name, located in the central region of Honduras, between 87 ° 22 'and 87 ° 55' of Western longitude and 14 ° 22 'and 14 ° 38' of North Latitude in the center of the country, between the Humuya and Chiquito rivers. Comayagua, limits to the north with the municipalities of El Rosario, San Jeronimo, Esquias and Siguatepeque. To the south with the Villa de San Antonio; to the east: Francisco Morazán Department. To the west Comayagua limits with the municipalities of Ajuterique, Lejamaní and the La Paz Department.

Right in front of the plaza is located City Hall, which has been reconstructed a couple of times. The building is of neoclassic style and was built during the 16th century. The Cathedral de la inmaculada concepcion of Comayagua was built during the colonial era in Honduras. It was inaugurated on 8 December 1711. In the cathedral there is also the oldest clock in America, built by the Arabs during their occupation in Spain around the year 1100. It was moved in the colonial period as a gift from King Carlos III. Another attraction is the Plaza de San Francisco, which has a park, the colonial church and is located a few meters from the main square. The houses of the city still preserve their original Spanish colonial architecture from the XVIII century, many of them have been turned into museums. The most important examples are the museum of colonial religious art, the archeological museum that contains relics of the Lenca people of the prehispanic era, and the republican museum. Another square in the old town is the Plaza de la Merced, it is known for having a monument known as the obelisk and in front of it is the Iglesia de la Merced. Which was the first cathedral of the city before the current one was completed in 1711. Another atraction is the Caxa real, a colonial house that was built between 1739 and 1741 and developed by the architect Bartolomé de Maradiaga as a center where the tributes for the Spanish crown were stored, within it Gold, silver and plaster extracted from the mines of Honduras were processed, to later be shipped to Europe. On the ground floor of the building, introduce some elements that were not in common use in Central American architecture; It makes a very good difference between the purely official area, the Courtroom, the Accounting Office, the Treasury, the Azogues room, the piece of fifth silver; This sector was entered through a large hall called by the men on horseback and which were on the street that the Chiquito River rises to the Plaza Mayor. In 1774, an earthquake that caused serious damage to the structure, however, was repaired within a few months, although the house was weaker. In 1809 another earthquake damaged the building. It was rebuilt in 2013 and is currently an events center that has hosted important international political figures, such as Queen Leticia of Spain, and the former President of Mexico on his visit to Honduras.

Soto Cano Air Base (formerly Palmerola Air Base) is a Honduran military installation located less than 16 kilometres (10 miles) from Comayagua. The 3-kilometre-wide (2 mi) and 10-kilometre-long (6 mi) airbase is home of the Honduran Air Force Academy. United States maintains Joint Task Force Bravo on Soto Cano Air Base with approximately 550 US military personnel and more than 650 US and Honduran civilians.

Comayagua is headquarters of Club Hispano, of the Honduran National Soccer League. The club obtained its first promotion to the National League in 2004–2005. Nevertheless, after only their first season in the soccer league; they were relegated to second division once again. For this reason the board of directors, bought the first division franchise from Club Municipal-Valencia of Choluteca. The Club plays its home games at the municipal stadium 'Carlos Miranda' which currently holds about 10,000 spectators.

Comayagua was host to the first International Fellowship of Christian Athletes Motocross camp in September 2012. 60 men and women participated in the camp which was instructed by professional riders from the United States, Jimmy Povolny, Shawn Clark and Ryan Meyung among others. The camp was followed by a race sponsored by Colmotos Enduro and was in memory of Dylan First, a US rider who lost his life on the track the previous year. This is now an annual event in Comayagua with instructors from the US and leaders from Honduras.