From Wikipedia, the free encyclopedia
(Redirected from Cochise County)
County in the Arizona, US
County in Arizona

In 1528 Spanish Explorers: Álvar Núñez Cabeza de Vaca, Estevanico, and Fray Marcos de Niza [3] survived a shipwreck off the Texas coast. Captured by Native Americans, they spent eight years finding their way back to Mexico City, via the San Pedro Valley. Their journals, maps, and stories led to the Cibola, seven cities of gold myth. The Expedition of Francisco Vásquez de Coronado in 1539 using it[ clarification needed] as his route north through what they called the Guachuca Mountains of Pima [4] ( Tohono O'odham) lands and later part of the mission routes north, but was actually occupied by the Sobaipuri descendants of the Hohokam. They found a large Pueblo (described as a small city) between present-day Benson and Whetstone, and several smaller satellite villages and smaller pueblos including ones on Fort Huachuca, Huachuca City and North Eastern Fry. About 1657 Father Kino visited the Sobaipuris [5] just before the Apache forced most from the valley, as they were struggling to survive due to increasing Chiricahua Apache attacks as they moved into the area of Texas Canyon of the Dragoon Mountains. In 1775, Presidio Santa Cruz de Terrenate [6] was founded on the west bank of the San Pedro River to protect the natives as well as the Spanish settlers who supplied the mission stations. The presidio was chronically short on provisions due to raids, however, and lacked personnel to adequately patrol the eastern route due to wars with France and England, so the main route north shifted west to the Santa Cruz valley, farther from the range of the Chiricahua Apache who almost exclusively controlled the area by 1821. [5] [7] 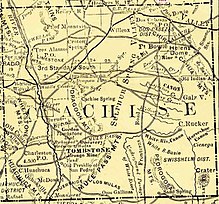 Cochise County was created on February 1, 1881, out of the eastern portion of Pima County. [8] It took its name from the legendary Chiricahua Apache war chief Cochise. [9] [10] The county seat was Tombstone until 1929 when it moved to Bisbee. Notable men who once held the position of County Sheriff were Johnny Behan, who served as the first sheriff of the new county, and who was one of the main characters during the events leading to and following the Gunfight at the O.K. Corral. Later, in 1886, Texas John Slaughter became sheriff. Lawman Jeff Milton and lawman/ outlaw Burt Alvord both served as deputies under Slaughter.

The Big Room in Kartchner Caverns 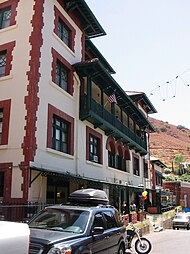 The Copper Queen Hotel in Bisbee

In 2000, the largest denominational group was the Catholics (with 25,837 adherents) and Evangelical Protestants (with 12,548 adherents). [17] The largest religious bodies were The Catholic Church (with 25,837 members) and The Southern Baptist Convention (with 5,999 members). [17]

Cochise County leans strongly towards the Republican Party in presidential elections. Although Bill Clinton carried the county narrowly in 1992, it has supported the Republican nominee by large margins in every other election since 1968, except for 1996 and 1976 when Clinton and Jimmy Carter each lost only narrowly. Although the county includes the relatively liberal town of Bisbee, as well as the city of Douglas, which has a large Latino population, this is outweighed by the heavily Republican tilt of the more populous Sierra Vista, which is adjacent to Fort Huachuca and thus has a heavy military presence.

In the United States House of Representatives, the county is part of Arizona's 2nd congressional district, which is represented by Democrat Ann Kirkpatrick; the majority of the district's population is in Tucson and its suburbs, which are far more liberal than Cochise County. In the Arizona Legislature, the county is part of the 14th district and is represented by Republican David Gowan in the State Senate and Republicans Gail Griffin and Becky Nutt in the State House of Representatives. This district also includes the entirety of Graham County and Greenlee County, as well as portions of Pima County.

Sierra Vista Municipal Airport (IATA: FHU, ICAO: KFHU, FAA LID: FHU), a joint-use civil-military airport which shares facilities with Libby Army Airfield, is located on the U.S. Army installation Fort Huachuca in the city of Sierra Vista. The airport has three runways and one helipad. It is mostly used for military aviation for the surrounding military base.

There are no commercial flights out of Cochise County; the nearest commercial airport is at Tucson, approximately 70 miles from Sierra Vista. 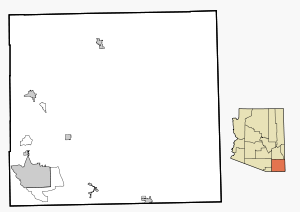 The population ranking of the following table is based on the 2010 census of Cochise County. [25] [26]