Coal mining in the United States

From Wikipedia, the free encyclopedia
See also: Coal power in the United States

Coal remains an important factor in the 25 states in which it is mined.[ citation needed] According to the U.S. Energy Information Administration (EIA), in 2015, Wyoming, West Virginia, Kentucky, Illinois, and Pennsylvania produced about 639 million short tons (580 million metric tons) representing 71% of total U.S. coal production in the United States. [5]

Main article: History of coal mining in the United States 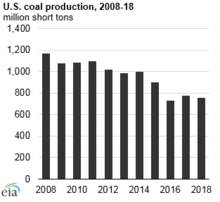 Coal regions of the United States 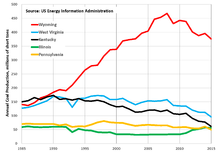 Coal production trends in the top 5 US coal states, 1985–2015, data from US Energy Information Administration

The three regions producing the largest amount of coal are Powder River Basin of Wyoming and Montana, the Appalachian Basin and the Illinois Basin. In the United States, coal production declined from 2008 but the decline was unevenly distributed. Production from the largest coal mining-region in the U.S., the Powder River Basin, with most of the coal buried too deeply to be economically accessible, [28] declined 16 percent, the Appalachian Basin declined 32 percent 2008 to 2014 and the Illinois Basin increased its production 39 percent from 2008 to 2014. [29] In 2015, five states—Wyoming, West Virginia, Kentucky, Illinois, and Pennsylvania—produced almost 3/4 of all coal production nationwide. Wyoming produced 375.8 million short tons representing 42% of U. S. coal production, West Virginia produced 95.6 million short tons or 11%, Kentucky was third with 61.4 or 7%, Illinois was fourth with 56.1 or 6% and Pennsylvania was fifth with 50.0 or 6%. [5]

As of 2014, twenty-five states produced coal. The coal-producing states were, in descending order, with annual production in millions of short tons: [30]

Trends in underground versus surface mining of US coal, 1949–2011 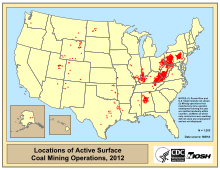 Location of surface coal mines in the US 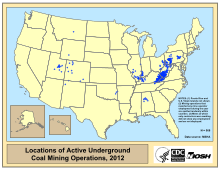 Locations of underground coal mines in the US 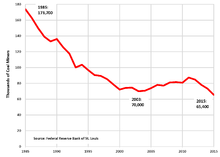 US employment in coal mining peaked in 1923, when there were 863,000 coal miners. [40] Since then, mechanization has greatly improved productivity in coal mining, so that employment has declined at the same time coal production increased. The average number of coal mining employees declined to 50,500 in 2016. [1] This was below the previous low of 70,000 in 2003, and the lowest number of US coal miners in at least 125 years. [41] [42]

Because of the sharp declines in the U.S. coal industry, the Harvard Business Review discussed retraining coal workers for solar photovoltaic employment because of the rapid rise in U.S. solar jobs. [43] A recent study indicated that this was technically possible and would account for only 5% of the industrial revenue from a single year to provide coal workers with job security in the energy industry as whole. [44]

In 2012, six coal export terminals were in the planning stages in the Pacific Northwest. [48] They were scheduled to be supplied by strip mines in the Powder River Basin. The export markets were South Korea, Japan, China, and other Asian nations. Like the Keystone Pipeline the building of the terminals raised environmental concerns with respect to global warming. [49] As of February 2016, four proposals for coal terminals had been withdrawn, leaving two still applied for. The withdrawals were ascribed to loss of demand and consequent lower coal prices. [50]

As of 2013, domestic coal consumption for power production was being displaced by natural gas, but production from strip mines utilizing thick deposits in the western United States such as the Powder River Basin in northern Wyoming and Southern Montana for export to Asia increased. [61] In 2014, 3.0 percent of the coal shipments from Montana and Wyoming were exported. [62] The 2014 coal exports from the two states of 13.4 million short tons represented an increase of 1.2 million tons over 2012 export levels, which is 0.3 percent of the states’ 2014 total coal shipments of 439.8 million short tons (399 million metric tons). [63]

As of 2013, 41 percent of US coal production was mined from federal land, almost all of it in the western US, where federal coal makes up about 80 percent of mined production. The federal coal program is overseen by the Bureau of Land Management (BLM) under the US Department of Interior. Federal coal lands are leased by competitive sealed bids, for the highest bonus (initial payment) offered. In addition, the government receives an annual rental of $3 per acre, and a fixed percentage royalty of the market value of coal produced. The royalty is 8 percent for underground mines and 12.5 percent for surface mines. [64] In 2014, the program generated about $1.2 billion in lease bonuses, rentals, and royalties for coal mining on federal lands. [42]

In January 2016, the Obama administration announced a three-year moratorium on federal coal lease sales on public land, effective immediately, and leaving around 20 years-of coal production under way. He noted that the program had not had a "top-down review" for the past 30 years. [65] This would affect 50 licenses. [21] The Trump administration reversed the moratorium. [66]

The Government Accountability Office has questioned whether bonus and royalty rates reflect coal's market value. Per GAO, since 1990 Colorado earned about $22 million less from bonus bids than Utah, though Colorado leased out almost 76 million tons more coal than Utah. BLM personnel noted that the coal mined in Utah was closer to its market, and so was more valuable due to lower transportation cost. [64]:27

The GAO report noted that the BLM publishes little information on federal coal lease sales, also does not include their appraisal report, because some of this information is "sensitive and proprietary"; this violates BLM's own guidance. [64]:44

The GAO also noted that the competitiveness of federal coal lease sales was limited by lack of multiple bids. Of the 107 tracts leased since 1990, 96 drew only a single bidder. This was attributed to the fact that most leased tracts were close to a single existing mine, and the large capital cost of installing a new mine discouraged competition. The BLM can reject bids which do not meet its estimate of fair market value, and 18 of the coal tracts leased since 1990 were tracts re-bid after the BLM had rejected the initial bids as too low. However, the GAO found that some BLM offices did not have the personnel to prepare adequate estimates of market value. [64]:16–19

A Boston-based think tank, the Institute for Energy Economic & Financial Analysis study estimated that, since 1991, $29 billion over a 30-year period was lost in the Powder River Basin, due to lack of competitive bidding. [67] [68] The institute's mission statement notes that its goals include: “… to reduce dependence on coal and other non-renewable energy resources.” [69] 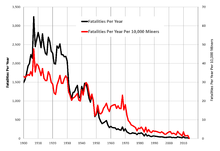 Accidents are not the only threat to modern coal miners and those living in coal regions. Respiratory disorders from coal dust and heart disease are both prevalent, especially in the West Virginia Appalachian coal mining region. [77] When mountaintop removal mining is used, not only do the miners suffer, but people living in the regions develop health issues. Excess rock, also known as overburden, removed from the mountains is dumped into valleys creating toxic runoff, that often pollutes streams used for local water sources or even the groundwater and wells. [77] Flooding and air pollution is also common in mining regions. [78] Burning coal releases CO2 into the atmosphere which is contributing to global climate change.

Coal regions in West Virginia are often referred to[ by whom?] as energy sacrifice zones. This means that the government sacrifices the health of the people and the environment in the region for the energy, and ultimately money, that can be extracted from the area. Often, the money is not returned to the state and is instead used for the salaries and lobbying in favor of Big Coal. [77]

Because of the poor economy in the region, coal mining is many miners' only economic option, which can create health problems for them and their families. [77]

Concern about global warming in the US [79] – especially in the aftermath of Hurricane Katrina and Al Gore's receipt of the 2007 Nobel Peace Prize for his raising awareness of climate change – temporarily increased public opposition to new coal-fired power plants. [80] [81] Simultaneously with these events, the anti-coal movement in the US – similar to that in the UK and Australia – had made coal-fired power projects more politically costly, and spurred further shifts in public opinion against coal-fired power. [82] [83] [84]

In a 2004 effort to foster positive public opinion of coal, many large coal mining companies, electric utilities, and railroads in the U.S. launched a high-profile marketing campaign to convince the American public that coal-fired power can be environmentally sustainable, despite the fact that coal is the largest contributor of CO2 emissions in the electricity sector. [85] [86] [87] However, some environmentalists condemned this campaign as a " greenwashing" attempt to use environmentalist rhetoric to disguise what they call "the inherently environmentally unsustainable nature of coal-fired power generation". [88]

The United States has 477 billion tons of demonstrable reserves. [89] The energy content of this coal exceeds that of oil and gas.