From Wikipedia, the free encyclopedia
(Redirected from Coach, Inc)
‹ The template Infobox company is being considered for merging. › 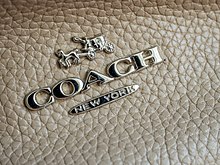 Coach's Logo on their Products

Coach was founded in 1941 as a family-run workshop in a loft on 34th Street in Manhattan, [6] [7] with six leather-workers who made wallets and billfolds by hand. [8] In 1946, Miles Cahn and his wife Lillian joined the company. [9] Miles and Lillian Cahn were owners of a leather handbag manufacturing business and were knowledgeable about leatherworks and business. [8]

By 1950, Cahn had taken over the company. During the early years, Cahn noticed the distinctive properties and qualities of the leather used to make baseball gloves. With wear and use, the leather in a glove became softer and suppler. Attempting to mimic this process, Cahn made a way of processing the leather to make it stronger, softer, and more flexible. Since the leather absorbed dye very well, this process also created a richer, deeper color in the leather. [10] Soon after Cahn developed this new process, Lillian Cahn suggested to Miles that the company supplement the factory's men's accessories business by adding women's leather handbags. [8] The "sturdy cowhide bags were an immediate hit." [8] Miles and Lillian Cahn bought the company through a leveraged buyout in 1961. [8]

In 1961, Cahn hired Bonnie Cashin, a sportswear pioneer, to design handbags for Coach. [8] Cashin "revolutionized the product's design," working as a creative head for Coach from 1962 through 1974. [8] Cashin instituted the inclusion of side pockets, coin purses, and brighter colors (as opposed to the usual hues of browns and tans) in the products. [8] Cashin also designed matching shoes, pens, key fobs, and eyewear, [8] and added hardware to both her clothes and accessories–particularly the silver toggle that became the Coach hallmark–declaring that she had been inspired by a memory of quickly fastening the top on her convertible sports car.

Richard Rose joined Coach in 1965, and he is responsible for making Coach a household name after putting the product in department stores across the United States and abroad.

In 1979, Lewis Frankfort joined the company as vice-president of business development. During this time, Coach was making $6 million in sales, and products were being distributed through the domestic wholesale channel, primarily in the northeastern United States. [9] Mr. Rose, then executive VP of sales, mentored Frankfort, before retiring from his position in the company in 1995.

In 1981 the company opened its first directly operated retail location on Madison Avenue in Midtown Manhattan. [11]

In 1985, the Cahns decided to sell Coach Leatherware after determining they wanted to "devote more time to their growing goat farm and cheese production business called Coach Farm in Gallatinville, New York, which they began in 1983". [8] Coach was then sold to Sara Lee Corporation for a reported $30 million. [8] Lew Frankfort succeeded Cahn as president. [8]

Sara Lee structured Coach under its Hanes Group. [8] In early 1986, the company opened new boutiques in Macy's stores in New York City and San Francisco. Additional Coach stores were under construction, and similar boutiques were to be opened in other major department stores later that year. By November 1986, the company was operating 12 stores, along with nearly 50 boutiques within larger department stores.

Sara Lee Corporation divested itself of Coach first, by selling 19.5% of their shares of Coach at the Coach IPO in October 2000, followed in April 2001, with the distribution of their remaining shares to Sara Lee's stockholders through an exchange offer. [12]

In 1996, Lew Frankfort was named chairman and CEO of Coach. The following year, under Frankfort's leadership, Coach hired Reed Krakoff, whose creative and commercials instincts aimed to make Coach products functional, lightweight, and stylish. [6] Krakoff's design transformed Coach from the relatively small company that it was in 1985 into the worldwide-known brand that it is today. [6] [13]

In 2014, the company announced Stuart Vevers as the new executive creative director, replacing Reed Krakoff. [16] During 2014, Coach also announced that Lew Frankfort would retire as executive chairman at the expiration of his term in November 2014. [17]

In July 2017, Coach purchased Kate Spade for $2.4 billion. [22] Michael Kors Holdings Ltd. had previously expressed interest in buying Kate Spade. [23] On October 10, 2017, Victor Luis (CEO) announced that on October 31, Coach Inc would be renamed and rebranded as Tapestry Inc. The company's ticker symbol on the NYSE changed from COH to TPR effective October 31, 2017. [24] As of 2019, Coach dropped the use of fur from its collection. [25]

In November 2019, Jennifer Lopez became the new global face of the company. [27] 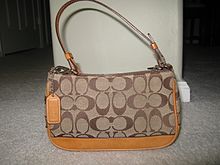 Lewis Frankfort has been involved with Coach for more than 30 years. [28] He was named chairman and CEO in 1995, and in 2014 became executive chairman. During 2000, he oversaw Coach's transition to a publicly-traded company listed on the NYSE and in 2011, became the first American issuer to list on the Stock Exchange of Hong Kong.

Luis has been a member of Coach's senior leadership team since joining the company in 2006, holding several international management roles and leading Coach's expansion in Asia. [29] Most recently, he served as president of the International Group and was responsible for Coach's operations outside of North America. Prior, he was president of Coach Retail International, where he oversaw the company's directly operated businesses in China (Hong Kong, Macau, and Mainland), Japan, Singapore, and Taiwan, and president and CEO of Coach China and Coach Japan. Luis originally joined Coach as president and CEO of Coach Japan, Inc.

Before joining Coach, from 2002 to 2006, Luis was president and chief executive officer for Baccarat, Inc., leading North American operation of the French luxury brand. [30] Earlier in his career, Luis held marketing and sales positions within the Moët-Hennessy Louis Vuitton (LVMH) Group.

Jide J. Zeitlin, Chairman of the Board, was appointed Chief Executive Officer (CEO) of Tapestry in September 2019. In this role, Jide Zeitlin is responsible for the execution of the company's strategic agenda and financial performance. Mr. Zeitlin was elected to Tapestry's Board of Directors in June 2006 and has served as the board chairman since November 2014. [32] 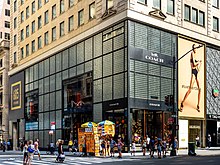 As of 2013, there were approximately 1,000 Coach stores in North America. Coach has also built a strong presence in the U.S. through Coach boutiques located within select department stores and specialty retailer locations. [12]

Today, Coach's corporate headquarters remain in Midtown Manhattan on 34th Street, in the location of their former factory lofts. In August 2016, the company finalized the sale and leaseback of its office condo portion of 10 Hudson Yards – its headquarters. Coach received $707 million before transaction costs. [34]

The Coach Foundation was established in 2008 to support organizations that "empower" and educate women and children around the world. [36]