Clint Newton (born 18 June 1981) is an Australian former United States international rugby league footballer who played as a second-row and lock. He played for the Newcastle Knights, Melbourne Storm and Penrith Panthers in the NRL, Hull Kingston Rovers in the Super League, New South Wales Country and the United States at representative level as well as a also having a stint in rugby union for Avoca Beach Rugby Club on the Central Coast, NSW.

Newton made his first grade début coming off the bench in Newcastle Knights 45–24 victory over New Zealand Warriors in Round 7 of the 2001 NRL season. Newton was not involved in Newcastles' Grand Final win that season, with his seventh and final appearance of the season coming in the Round 23 loss to Wests Tigers where he suffered a season ending shoulder injury.

After recovering from his shoulder injury he gained selection in the Knights first team for the 2002 World Club Challenge against the Bradford Bulls. Newton was then selected for Newcastles' 38–12 Round 1 victory against Northern Eagles, scoring his first try in the game. Newton went on to appear regularly for Newcastle during the 2002 season, making 25 appearances, mainly from the bench, and scoring 4 tries. However it wasn't until Round 7 of the 2004 season that Newton held down a regular first team starting role after suffering two severe ankle injuries in 2003.

In 2006 he was selected to play Country Origin, but was ruled out with injury and replaced by the man he struck in the elbow late in the 2004 season, Ashton Sims (see below). Sims himself was also ruled out and replaced by then-Wests Tigers backrower Anthony Laffranchi.

Newton had been sin binned four weeks earlier against the Cowboys for a professional foul. 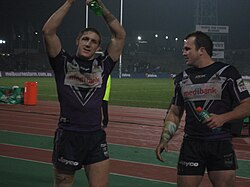 On 27 May 2007, Newton started in Newcastle Knights 71–6 defeat by Brisbane Broncos in what turned out to be his last game for the club. The next day, Newton announced he was leaving the Newcastle Knights after just 100 games, due to "personal reasons" and after learning coach, Brian Smith no longer saw him as a "must keep" for the remainder of the 2007 season or beyond. [5]

On 29 May 2007 Newton signed with the Melbourne Storm. [6] He started in the second row in the Storm's round 13 clash with the New Zealand Warriors in Auckland and was one of the best players on the field, playing the full 80 minutes.

He went on to play and score in the Grand Final, a 34–8 victory over Manly, becoming the second player to transfer mid-year to a Grand Final winning club and made history by being the first player to transfer mid-year and score a try in his winning grand final. In all Newton played 15 matches for Melbourne, ending up on the losing side only once, a Round 20 defeat by Sydney Roosters. He had the same birthdays as fellow Storm players Billy Slater and Cameron Smith but was two years older than both players. In 2010, the premiership that Newton won with Melbourne was stripped by the NRL for major breaches of the salary cap alongside the 2009 premiership. [7]

On 17 October 2007, he was released by the Melbourne Storm due to salary cap restrictions and announced his move to the Super League on a two-year contract at the Hull Kingston Rovers. [8]

Newton made his Hull KR début in the opening match of the 2008 season, a narrow 20–12 away defeat by reigning champions Leeds Rhinos. Newton went on to score his first try for the club in only his second match, a thrilling 24–22 home victory against St. Helens.

Newton has been a star performer during the 2009 season, including scoring two hat tricks against Crusaders and Warrington Wolves. During the season Newton has, on occasions, been used as a starting prop forward before reverting to his familiar second row role later in the match. He has scored 12 Super League tries and 3 challenge cup tries in the 2009 season, his excellent form earning him a spot in the 2009 Super League Dream Team alongside teammates Ben Galea, Michael Dobson and Shaun Briscoe. Newton signed a four-year contract to take him through to the end of 2013 with Hull KR. [9]

Following on from the successful 2009 campaign Newton continued his string of impressive performances in the opening round victory over Salford City Reds, scoring a try in the 30–12 victory.

Newton signed a two-year deal with the Penrith Panthers from 2012 having been brought in by Phil Gould to help rebuild the club, mentor younger players and use his experience to lead by example.[ citation needed] Newton played a total of 46 first-grade games out of a possible 48 during his time at Penrith.

On 21 July 2015, Newton announced his retirement from rugby league at the end of the year, after spending his two last years back at the Knights mentoring younger players in New South Wales Cup. [11] On 27 September 2015, he captained the Knights in their 2015 New South Wales Cup Grand Final win over the Wyong Roos. [12] [13]

Newton is now the Chief Executive Officer of the Rugby League Players Association. [14]

After finishing his Rugby League career he went on to sign with the Rugby Union club Avoca Beach on the Central Coast, NSW where he was scouted out by the 2019 premiership winning 3rd grade coach for the 2020 season.

Not only did Clint score on his debut and suffer a minor injury during the season, he came back to the “dream team” to go on and beat the “blue filth” in the 2020 grand final helping steer the side to back to back grand final victories.

Although he never received the man of the match award, he played a massive part in contributing to the recipients game where Clint’s initials will also be engraved into the medallion.

While recuperating from injury in 2008, Clint caddied for Nikki Garrett during the Goteborg Masters in Sweden. [15] Newton has also appeared alongside Garrett at the Jack Newton Celebrity Classic. [16] [17]

During 2009 Clint appeared on the BBC World News show, Peschardt's People, where he talked to journalist Michael Peschardt about rugby league, his life in Hull and his family.