Clarkdale ( Yavapai: Saupkasuiva [4]) is a town in Yavapai County, Arizona, United States. The Verde River flows through the town as does Bitter Creek, an intermittent tributary of the river. According to the 2010 census, the population of the town was 4,097. [2]

Clarkdale, formerly a mining town, is now largely a retirement community with an eye for the arts.

Clarkdale was founded in 1912 as a company smelter town by William A. Clark, for his copper mine in nearby Jerome. Clarkdale was one of the most modern mining towns in the world, including telephone, telegraph, electrical, sewer and spring water services, and was an early example of a planned community. [5] The Clark Mansion, a local landmark, was built in the late 1920s by William Clark III, Clark's grandson and heir to the United Verde Copper Company. The structure, east of town across the Verde River near Pecks Lake, was destroyed in 2010 by a fire of "suspicious" origin. [6]

The mine and smelter closed in 1953, and Clarkdale entered hard times. Clarkdale was bought and sold by several different companies. In 1957, Clarkdale was incorporated as a town. The 1959 construction of the Phoenix Cement Company plant restored a modest prosperity to the community. [5]

Clarkdale was a segregated town for much of its early history. Mexican and Mexican-American laborers were restricted to living in Patio Town (see neighborhoods), with a separate swimming pool and park; the town swimming pool was marked "whites only." Additionally, Upper Clarkdale was designated for engineers and executives, while Lower Clarkdale was for the "working class." [7]

A portion of the Yavapai-Apache Nation is within Clarkdale's boundaries. [5]

Clarkdale is at 3,545 feet (1,081 m) above sea level at the confluence of Bitter Creek and the Verde River in Yavapai County, northern Arizona. The town is about 40 miles (64 km) southwest of Flagstaff and about 90 miles (140 km) north of Phoenix. Arizona Route 89A skirts the town on its south edge, while Historic Route 89A passes through Clarkdale. Nearby towns include Jerome, about 4 miles (6.4 km) to the southwest, and Cottonwood, about 4 miles (6.4 km) to the southeast. [8]

Tuzigoot National Monument, a 42-acre (17 ha) Sinagua pueblo ruin, [9] is between Clarkdale and Cottonwood, Arizona, on land donated to the National Park Service by Phelps Dodge in 1938.

Little snow falls in Clarkdale. Between 1949 and 1977, Cottonwood, Clarkdale's close neighbor, received an average of about 4 inches (10 cm) of snow a year. About half of this fell in December. The average snow depth in Cottonwood during the period of record was reported as zero. [13] 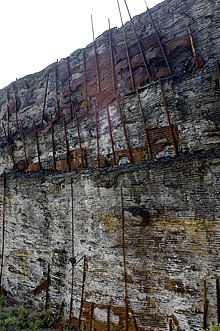 A slag heap in Clarkdale

The Phoenix Cement Company is Clarkdale's only major industry. The cement plant was built in 1959 to supply Portland cement for the construction of Glen Canyon Dam and is owned by the Salt River Pima-Maricopa Indian Community. Clarkdale is home to the Verde Canyon Railroad, a scenic excursion train that follows part of the route of the Verde Valley Railroad, constructed in 1911–12 to serve Clark's mine and smelter, to Drake and Perkinsville, now ghost towns. [14] Yavapai College also has a campus in Clarkdale.

Several motion pictures have been shot in Clarkdale, including Desert Fury, Midnight Run, Universal Soldier, Benefit of the Doubt and Brothel. [15]

Clarkdale's neighborhoods are not strictly defined, but include:

Clarkdale is the home of Clarkdale–Jerome School District, a one-school district that encompasses both Clarkdale and Jerome. The public school has enrollment from kindergarten to eighth grade. [19] Mingus Union High School in Cottonwood encompasses Clarkdale for high school students. [20] There are also charter schools in Cottonwood. In addition, Yavapai College has a community college campus in Clarkdale. The campus is home to the newly opened Southwest Wine Center.

Clarkdale became one of the municipalities in Arizona to recognize civil unions for same-sex partners and opposite-sex partners seeking a form of recognition other than marriage. [24] [25]

Panorama of the Clark Memorial Clubhouse