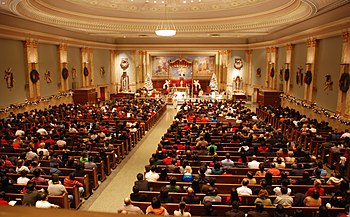 Many Christians attend church services on Christmas Eve, the Christian vigil that celebrates the birth of Jesus Christ. [1]

Church attendance is a central religious practice for many Christians; some Christian denominations, such as the Catholic Church require church attendance on the Lord's Day (Sunday); the Westminster Confession of Faith is held by the Reformed Churches and teaches first-day Sabbatarianism, [2] thus proclaiming the duty of public worship in keeping with the Ten Commandments. [3] Similarly, The General Rules of the Methodist Church also requires "attending upon all the ordinances of God" including "the public worship of God". [4] Until 1791, the government of the United Kingdom required attendance at church services of the Church of England (the mother Church of the Anglican Communion and a state Church) at least twice a year. [5] To this end, all major branches of Christianity, however, encourage church attendance, with one Christian apostolate providing the following biblical imperatives:

The Lutheran Christian theologian Balthasar Münter stated that church attendance is the "foundation for the Christian life" as "the Christian Bible and the sacraments provide the framework for the faith"; he also states that it is important for believers because it aids in the prevention of backsliding, as well as offers "the company of other believers". [7]

According to data from the European Social Survey in 2012 around a third of European Christians say they attend services once a month or more. [8] Conversely about two-thirds of Latin American Christians and according to the World Values Survey about 90% of African Christians (in Ghana, Nigeria, Rwanda, South Africa and Zimbabwe) said they attended church regularly. [8] The Gallup International, a self-reporting survey conducted via telephone, indicates that 37% of Americans report that they attend religious services weekly or near-weekly in 2013. [9] The Pew Research Center stated, however, that there is a "sharp increase in church attendance around the two most significant Christian holidays, Christmas and Easter." [10] As such, on Christmas (a Principal Feast in the Anglican Communion, a holy day of obligation in the Catholic Church and a Festival in the Lutheran Churches), LifeWay Research found that "six out of 10 Americans typically attend church". [11] Countries that hold or have held a policy of state atheism have actively discouraged church attendance, often persecuting Christians who continued to worship. [12] 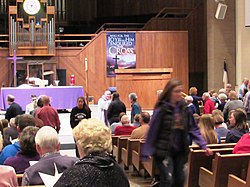 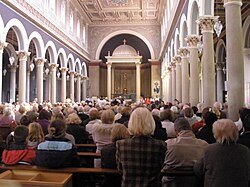 The Gallup International, a self-reporting survey conducted via telephone, indicates that 37% of Americans report that they attend religious services weekly or near-weekly in 2013. [9] Self-reporting surveys conducted online indicate substantially lower weekly attendance rates, [14] and methods of measurement that don't rely on self-reporting estimate even lower rates; for instance, a 2005 study published in the Journal for the Scientific Study of Religion found that just 22% of Americans attend services weekly. [15]). This compares to other countries claims such as 15% of French citizens, 10% of UK citizens, [16] 8.8% of Australian citizens and 5.6% of Dutch citizens. [17] In the U.K., in 2011, an average once-a-week attendance in Anglican churches went down by 0.3% compared with 2012, thus exhibiting a stabilizing trend. [18] Previously, starting from 2000, an average rate of weekly church attendance in Britain was dropping down 1% annually. In 2013, the Pew Research Center reported that 37% of all Americans attended church on a weekly basis. [19] In its turn, Gallup estimated the once-a-week church attendance of the Americans in 2013 as 39%. [20]

Based on 1990-1991 data, it was estimated that the country with the highest rate of church attendance in the world was Nigeria (89%) and with the lowest - the Soviet Union (2%). [21] Nigeria's data was notable, as Nigeria is very religiously diverse - the population is 50.1% Muslim and 48.2% Christian. The state authorities in the USSR, which dissolved in 1991, discouraged church construction; they had a hostile relationship with traditional organized religions and instead promoted Marxist-Leninist ideology, which espoused state atheism. [22] [23] A survey commissioned by the Época Magazine in 2005 showed that 29% of Brazilians attend church weekly, and indicated that it is lesser than in the United States but higher than in Western Europe and Japan, indeed showing that contrary to the local popular belief, Brazilians of the time could indeed be regarded as a religious people even in practice (though it is ponderable that the growth of the population declaring to be solely irreligious in nationwide censuses grew about 100% between 2000 and 2010, and 200% between 2000 and 2013, from 4% to 12%, and general secularization also grew among the portion of the population that remained religious). [24]

Calculating the church's average weekend attendance is important since it determines the size of a given church. For example, in the U.S., an average weekend attendance of more than 2,000 people separates a mega church from a large church, and an average weekend attendance between 51 and 300 people defines the large church; while a small church is the church with an attendance lower than 50 people. [26] (Alternative definitions, such as house church, simple church, intentional community, were proposed by the Barna Group, an American private consulting firm. [27]) A narrow definition of a regular church attendee can be viewed as a synonym for a Sunday service visitation, while a broad definition, names as a regular attendee a person who comes to church during three out of eight weekends. [28]

The frequency at which Christians attend church services varies greatly around the world. In some countries weekly attendance at religious services is common among Christians, while in others weekly attendance is rare. The following attendance statistics are mostly based on self-reporting surveys and may not accurately reflect real attendance figures.

The following attendance statistics are taken from the 2004 Gallup report, based on self-reporting telephone surveys. However, it is unclear whether the survey was solely of Christians in the respective country or the entire population (including non-Christians).

The frequency by which adults attend church services also vary on a state-by-state basis in the United States of America. 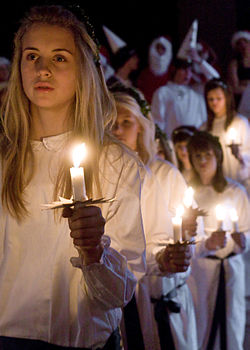 Church attendance remains stronger among older demographics, and more common for women. [58] [59] [60] There is evidence that links church attendance with health benefits. The Pew Research Center, which conducts the extensive research and information program Pew Forum on Religion and Public Life, has linked regular church attendance with happiness. [61] Several studies associated church attendance with decreased risk of Alzheimer's disease. [62] Research by Rita W. Law and David A. Sbarra demonstrated that "church attendance was found to have a protective effect against the emergence of mood problems among older adults." [63] Graham et al. discovered that "consistent pattern of lower systolic and diastolic blood pressures among frequent church attenders was found compared to that of infrequent attenders which was not due to the effects of age, obesity, cigarette smoking, or socioeconomic status." [64] Oman D et al. found that "infrequent (never or less than weekly) attenders had significantly higher rates of circulatory, cancer, digestive, and respiratory mortality (p < 0.05), but not mortality due to external causes." [65] With respect to students, Glanville et al. found "that religious attendance promotes higher intergenerational closure, friendship networks with higher educational resources and norms, and extracurricular participation." [66] Research conducted at the Harvard School of Public Health found "that regularly attending church services together reduces a couple’s risk of divorce by a remarkable 47 percent". [67]

A 2018 sociological survey found that in the United States, "Donald Trump voters who attend church regularly are more likely than nonreligious Trump voters to have warmer feelings toward racial and religious minorities, to be more supportive of immigration and trade, and to be more concerned about poverty." [68] [69] A 2005 European Union survey found that religious belief increased with age and was higher among women, those who were leaning towards right-wing politics, and those reflecting more upon philosophical and ethical issues. [70] In particular, the Iona Institute documented increasing church attendance in Ireland, despite sex-abuse scandals that plagued the Catholic Church. [71] Some suggest[ who?] the rise is due to the effects of the economic recession.

Research shows that there is a correlation between church attendance and the level of education. For instance, in a Pew Research study from 1996, approximately 34% of high school dropouts went to church on a typical Sunday, while 44% of those with a college degree or higher did. [72] 48% of married individuals attended church on a typical Sunday, compared with 29% of divorced and 31% of never-married individuals. While it is likely that the well-educated and married might over-report their church attendance more often, these findings nevertheless demonstrate that they have maintained a stronger church-going identity than other Americans. In the United Kingdom, research in 2018 demonstrated that "Students at Oxford, Cambridge and Durham are twice as likely to worship on a Sunday as the general population"—colleges at these universities maintain approximately fifty-six chapels for worship. [73]

In Switzerland, the Fertility and Family Survey was commissioned by the Federal Statistical Office (Switzerland) to enable Switzerland to take part in this international project launched by the UNECE Population Activities Unit. The survey was conducted between October 1994 and May 1995, with the results being published in 2000 by the Council of Europe. The results are representative of Switzerland's permanent resident population aged 20–49 and presented in the table below. [74]

Practice of religion according to practice of parents (%)

An American study found similar results on the impact of fathers: [77]

Research on individuals residing in the United States and Canada concluded that "Ninety-six percent of the unchurched are at least somewhat likely to attend church if they are invited." [78] In July 2018, LifeWay Research found that "Nearly two-thirds of Protestant churchgoers say they’ve invited at least one person to visit their church in the past six months". [79] 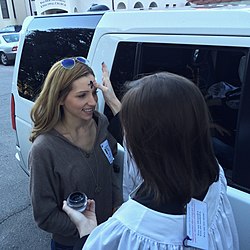 Church attendance in advanced industrial societies is in gradual general decline with people shifting from weekly to monthly or holiday attendance. Sociologists have attributed this trend to a number of reasons, starting from a simple boredom during services and lack of motivation, to generational incompatibility of belief systems and social changes attributed to modernity. [80] Research across 65 different nations showed that out of 20 advanced industrial countries - 16 demonstrated a declining rate of monthly church attendance. [81]

An article published in the Christianity Today Magazine suggested that in America, church attendance since the 1990s has remained stable. [82] According to the Handbook of the Sociology of Religion, 50% of Americans replied that God is very important in their lives, comparing with 40% of Irish, 28% of Canadians, 26% of Spaniards, 21% of Australians, and 10% of the French. [83]

The decline in church attendance is more pronounced in developed European countries, where it is suggested that the secular culture overrides interest in religion. In Poland Church attendance has declined from more than 50% in 1979 to 40% in 2012. [86]

In the early 1990s, American sociologists Kirk Hadaway, Penny Marler, and Mark Chaves found that weekly attendance at Protestant and Catholic churches in one rural county in Ohio was only about 20%, whereas self-reported church attendance was 36%. [87] The following studies confirmed a long-suspected gap between actual and self-reporting church attendance. [88] [89] The researchers have been wary of accusing over-reporters of dishonesty, as they found in the study that those who over-report do so mainly to maintain perceptions of themselves as "churched" Americans, not because they are afraid to reveal to the interviewer that they are "bad Christians." [90] The findings point to a bigger issue as many people in the world may be over-reporting church attendance because of their self-perception and identity as churchgoing people, indicating a certain psychological aspect to the over-reporting of church attendance. Although surveys of church attendance are aimed to study religious behavior, many respondents view them as questions about their identity. This is especially true among Americans who consider themselves "regular churchgoers." [91] [92]