From Wikipedia, the free encyclopedia
(Redirected from Chattahoochee-Oconee National Forest)

Numerous animals can be found in this forest including birds such as species of hawk, species of owl, blackbirds, ducks, eagles, sparrows, hummingbirds, geese, and cardinals. Mammalian species that roam in the forest are American black bear, shrew, coyote, a variety of bats, squirrel, beaver, river otter, bobcat, deer, weasel, mice, and foxes. The forest is known to be home to the mysterious blue glow of the Blue ghost firefly, Phausis reticulata and many species of fish and amphibians swim in the many streams and lakes; also various species of reptile inhabit the forest. 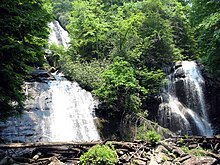 In 1911, the United States Forest Service purchased 31,000 acres (125 km2) of land in Fannin, Gilmer, Lumpkin and Union Counties from the Gennett family for $7 per acre. This land was the beginning of what would become the Chattahoochee National Forest. The initial land purchases became a part of the Cherokee National Forest on June 14, 1920.

Ranger Roscoe Nicholson, who was the first forest ranger in Georgia and had advised the Forest Service in its initial land purchases, continued the growth of the Chattahoochee by negotiating the purchase of most of the Forest Service land in what is now the Chattooga River Ranger District. The Coleman River Scenic Area near Clayton, Georgia was dedicated to "Ranger Nick", as he was called, in honor of his promotion of conservation ideals.

Ranger Arthur Woody also promoted conservation and was a key figure in the early development of the Chattahoochee. Unwise land and resource use had caused the deer and trout populations to virtually disappear in the North Georgia mountains and Woody brought trout and deer back to the area. The trout were shipped to Gainesville, hauled across the narrow, dirt, mountain roads and eventually released in the streams. Woody also purchased fawns with his own money, and fed them until they could be released on what became the Blue Ridge Wildlife Management Area. Many landmarks in the Chattahoochee bear Ranger Woody’s name in tribute to his work. Sosebee Cove, a 175 acres (0.7 km2) tract of prize hardwood along GA 180 is set aside as a memorial to Woody, who negotiated its purchase for the Forest Service.

Woody also helped build a school, in Suches GA, where he was born, which was later named after him, Woody Gap School, the smallest public school in Georgia. current enrollment is around 60 students total, K-12.

On July 9, 1936, the Forest Service was reorganized to follow state boundaries and President Franklin D. Roosevelt proclaimed the Chattahoochee a separate National Forest. In 1936, the Chattahoochee was organized into two Ranger Districts, the Blue Ridge and the Tallulah.

The Chattooga River was designated a Wild and Scenic River during the 1970s. The Chattooga remains one of the few free-flowing streams in the Southeast and is known for its white water rafting and scenery.[ citation needed] The movie Deliverance was filmed on the Chattooga River, which became the fictional Cahulawassee River in the movie. 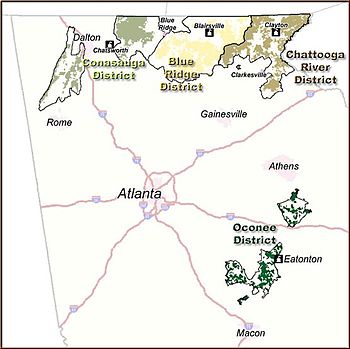 It includes over 2,200 miles (3,500 km) of rivers and streams (including about 1,367 miles (2,200 km) of trout streams). There are over 450 miles (720 km) of hiking and other recreation trails, and 1,600 miles (2,600 km) of "roads." In addition to the Chattooga River and the headwaters of the Chattahoochee River, natural attractions within it boundaries include the beginning of the 2,174-mile (3,499 km) Appalachian Trail, Georgia's highpoint, Brasstown Bald and Anna Ruby Falls.

The Oconee National Forest today is spread over eight Georgia counties and is organized into one ranger district. The Oconee Ranger District maintains several hiking and other recreational trails in the forest. Forest headquarters are located in Gainesville, Georgia. 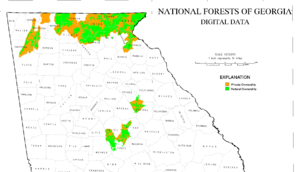 Map showing the lands of the National Forest

Listed below are the counties with land in the Forest showing the area and the relevant ranger districts. [3]

The Oconee National Forest is almost halfway between Macon and Athens. There are two major man-made lakes within the boundaries of the Oconee Ranger District, both on the Oconee River. Lake Sinclair lends its water and name to Lake Sinclair Recreation Area in Putnam County. This is the major recreation area of the Oconee Ranger District and offers camping, boating, fishing and swimming. Redlands Recreation area is located on Lake Oconee in Greene County and offers boating, picnicking and fishing. Oconee River Recreation Area, farther upstream and near the northern boundary of the National Forest offers camping and boating. There are many miles of hiking and equestrian trails within the forest and one trail for dirt bikes and four-wheelers. Hunt camps dispersed throughout the district are temporarily home to hundreds of hunters who enjoy the forest during deer hunting season. An active timber program insures the health of the forest.