Chappaqua ( /ˈtʃæpəkwɑː/ CHAP-ə-kwah) is a hamlet and census-designated place in the town of New Castle, in northern Westchester County, New York. It is on 0.45 square miles (1.2 km2) of land on the east bank of the Hudson River, about 30 miles (50 km) north of New York City. The hamlet is served by the Chappaqua station of the Metro-North Railroad's Harlem Line. In the New York State Legislature it is within the New York State Assembly's 93rd district and the New York Senate's 40th district. In Congress the village is in New York's 17th District.

Chappaqua was founded by a group of Quakers in the 1730s and was the home of Horace Greeley, New-York Tribune editor and U.S. congressman. Since the late 1990s, former President Bill Clinton and former Secretary of State Hillary Clinton have lived there.

In the early 1730's a group of Quakers moved north from Purchase, New York, to settle in present-day Chappaqua. They built their homes on Quaker Street and held their meetings at the home of Abel Weeks. Their meeting house was built in 1753 and still holds weekly meetings each Sunday. The area around the meeting house, known as Old Chappaqua Historic District, was added to the National Register of Historic Places in 1974. [6] Horace Greeley's home, known as Rehoboth and built by Greeley himself, still stands in Chappaqua. It is also listed on the National Register of Historic Places along with Chappaqua Railroad Depot and Depot Plaza, Church of Saint Mary the Virgin and Greeley Grove, and the Greeley House. [6]

Various spellings were used for the name they heard Native Americans use for their valley and hillside. It was an Algonquian word, shah-pah-ka, and it meant "the rustling land" or "the rattling land," or a place where nothing is heard but the rustling of the wind in the leaves. The Quakers spelled it Shapiqua, Shapaqua, Shapequa, Shappaqua, and, finally, Chappaqua. Their meeting was often referred to as the Shapequa Meeting as early as 1745. [7]

On March 18, 1791, the government of New York decided to split the overly large town of North Castle (jokingly called "the two saddlebags") into two smaller towns, one of which was named New Castle. The border was drawn from the southwest corner of Bedford to the northeast edge of Mount Pleasant. New Castle's borders have remained the same since 1791, except for a small piece of land received from Somers in 1846 and the secession of Mount Kisco in 1978.

Chappaqua had great streams such as the Saw Mill River and Roaring Brook. These bodies of water powered mills to crush corn and press oil from beans. The eastern half of Chappaqua was very suitable for farming. The majority of the Quaker settlers of Chappaqua were farmers. The popular farming industry also helped give way to Chappaqua's high milk production. Other popular industries from Chappaqua included shoes, hardware, vinegar, pickles, eyeglasses, and furniture. Many early homes and businesses were demolished in the 1904 Chappaqua tornado.

In 1846 when the New York and Harlem Railroad extended through Chappaqua, business became centered on the new train station. These businesses included a hotel, livery stables, a public library, and various stores and small factories. The railroad enabled commuters to travel to New York City and back each day.[ citation needed]

As of the 2010 census, following a major revision to the delineation of its boundaries by the Census Bureau, the population was 1,436. [10] At the 2000 census, with very different census-defined boundaries, Chappaqua had a population of 9,468. [11]

There were 3,118 households out of which 52.1% had children under the age of 18 living with them, 79.1% were married couples living together, 5.6% had a female householder with no husband present, and 13.8% were non-families. 11.6% of all households were made up of individuals and 4.8% had someone living alone who was 65 years of age or older. The average household size was 3.03 and the average family size was 3.27.

Although Chappaqua's crime rate is far below the national average, [15] the area has had several high-profile murders. In 1996, a battle between a lottery winner and his former lover over custody of their 5-year-old child resulted in a gun battle; the winner was acquitted of the murder of his former lover on the basis of self-defense, and convicted of the shooting of the woman's father. [16] In November 2006 a disbarred attorney drove the body of his severely injured wife to Northern Westchester Hospital, claiming that the couple had been ambushed and shot in nearby Millwood. She died soon after. For over a year, police expressed skepticism about the husband's account and did not rule him out as a suspect. In December 2007 the man was charged with his wife's murder after trying to collect on life insurance policies. [17] [18] Carlos Perez-Olivo was convicted October 4, 2008 for the murder of his wife, Peggy Perez-Olivo, who had been working as a teaching assistant at Douglas Grafflin Elementary School in Chappaqua. [19]

Parent expectations in the school district are high, and the educational environment has been described as highly competitive and somewhat stressful. [20] In addition, Horace Greeley High School has Chappaqua Summer Scholarship Program, which brings motivated and aspiring students from The Bronx to Chappaqua for four weeks over three summers to take classes while living with host families in Chappaqua. [21] Around 1981, the magazine Money rated the school among the top twelve in the United States. [22]

Schools in Chappaqua were not always so high-performing. Small, one-room schoolhouses devoid of windows were prevalent in the 1800s. In the Chappaqua region, there were eight such schoolhouses.[ citation needed] These small schools prevailed until around 1870, when the Quakers built a large school called the Chappaqua Mountain Institute on Quaker Street. In the year 1885 the school caught fire, [23] and much refurbishing was done, with the addition of two new wings. It was sold in 1908 and the school's property is now owned by Children's Aid.

The district's modern commitment to education was exemplified in the 1950s when Horace Greeley High School principal, Donald Miles, began hiring teachers based primarily on their subject knowledge, eschewing the "professional teacher". One of the most notable hires was Edwin Barlow, a math teacher whose controversial classroom methods and enigmatic life are chronicled in the 2009 memoir, Teacher of the Year: The Mystery and Legacy of Edwin Barlow. [28] One of the current (2011) Chemistry and AP Chemistry teachers, Richard Goodman, won the "Chemistry Teacher of the Year" award in 2009.

In 2003, after the opening of the new middle school, Seven Bridges, and the moving of the fifth grade from Chappaqua's elementary schools to the middle schools, the district added a full day kindergarten. [29] [30]

Emergency Medical Service and fire protection are provided by volunteer agencies. The Chappaqua Volunteer Ambulance Corps (CVAC) provides Basic Life Support services to most of New Castle, including Chappaqua. The hamlet is protected by the New Castle Police Department, which also provides first-response services for medical emergencies. The volunteer-based Chappaqua Fire Department, established in May, 1910, provides firefighting services to the hamlet of Chappaqua. [31] [32] The fire department currently maintains two firehouses in town. [33] 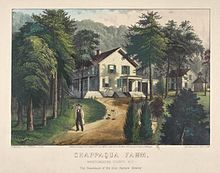 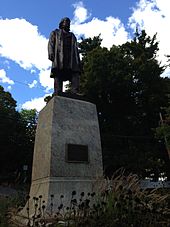 Statue of Horace Greeley in Chappaqua