From Wikipedia, the free encyclopedia
Hospital in California, United States

Cedars-Sinai Medical Center is a non-profit, tertiary 886-bed hospital and multi-specialty academic health science center located in the Mid-City West area of Los Angeles, California. [1] [2] [3] Part of the Cedars-Sinai Health System, the hospital employs a staff of over 2,000 physicians and 10,000 employees. [4] [5] A team of 2,000 volunteers and more than 40 community groups support. [6]

As of 2019, U.S. News & World Report ranked Cedars-Sinai #3 in the western United States, with number one being Ronald Reagan UCLA Medical Center. [11] Cedars-Sinai also earned national rankings in 12 adult specialties including: -Cancer (No. 12) -Cardiology and Heart Surgery (No. 3) -Diabetes and Endocrinology (No. 16) -Ear, Nose and Throat (No. 38) -Gastroenterology and GI Surgery (No. 2) -Geriatrics (No. 12) -Gynecology (No. 8) -Nephrology (No. 10) -Neurology and Neurosurgery (No. 12) -Orthopaedics (No. 3) -Pulmonology (No. 4) -Urology (No. 12) [12] Located in the Harvey Morse Auditorium, Cedars-Sinai's patient care is depicted in the Jewish Contributions to Medicine mural. [13] The heart transplantation program at Cedars-Sinai Medical Center has experienced unprecedented growth since 2010. 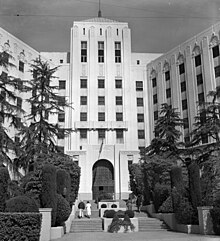 Founded by businessman Kaspare Cohn, Cedars of Lebanon Hospital was established as the Kaspare Cohn Hospital in 1902. [14] [15] At the time, Cohn donated a two-story Victorian home at 1441 Carroll Avenue in the Angeleno Heights neighborhood of Los Angeles. The hospital had just 12 beds when it opened on September 21, 1902, and its services were initially free. [15] From 1906 to 1910, Dr. Sarah Vasen, the first female doctor in Los Angeles, acted as superintendent. [16] In 1910, the hospital relocated and expanded to Stephenson Avenue (now Whittier Boulevard), where it had 50 beds and a backhouse containing a 10-cot tubercular ward. [15] It gradually transformed from a charity-based hospital to a general hospital and began to charge patients. [17] In 1930, the hospital moved to 4833 Fountain Avenue, where it opened as Cedars of Lebanon Hospital, named after the religiously significant Lebanon Cedars tree (cedrus libani); which were highly sought after and used to build King Solomon's Temple in Jerusalem. Cedars of Lebanon Hospital could accommodate 279 patients and was large and comprehensive, with all of the components of a modern medical facility. For example, specific departments were instituted for general medicine, surgery, pediatrics, maternity, physical therapy, and other speciality departments. [18] [15] [17]

Meanwhile in 1918, the Bikur Cholim Society opened a two-room hospice, the Bikur Cholim Hospice, when the Great Influenza Pandemic hit America. [17] In 1921, the hospice relocated to an eight-bed facility in Boyle Heights and was renamed Bikur Cholim Hospital. [17] On November 7, 1926, it was renamed Mount Sinai Hospital and moved to a 50-bed facility on Bonnie Beach Place in Los Angeles. [15] [17] Later, in 1950, a new Mount Sinai Hospital was built on landed donated by Emma and Hyman Levine at 8700 Beverly Boulevard. [15] They had purchased three-and-one-half acres of land and donated the property to Mount Sinai Hospital under the auspices of their foundation. [19]

Merger of Cedars of Lebanon Hospital and Mount Sinai Hospital

On Tuesday Feb 7th, 1961, Cedars of Lebanon Hospital and Mt. Sinai announced plans for the establishment of a unified medical center of 1,000 beds or more.

Cedars of Lebanon Hospital and Mount Sinai Hospital merged in 1961 to form Cedars-Sinai Medical Center. [20] [17] [21] The unification of the two hospitals was one of the most significant consolidations ever achieved by hospitals; it was in response to community needs for improved and extend health services made necessary by population growth and by modern medical progress. Donations in the amount of 4 million dollars from the Max Factor Family Foundation allowed the construction of the main hospital building, which broke ground on November 5, 1972, and opened on April 3, 1976. [22]

In 2013, Cedars-Sinai opened its 800,000-square-foot Advanced Health Sciences Pavilion, which consists of eight stories of program space located over a six-story parking structure, on the eastern edge of its campus at the corner of San Vicente Boulevard and Gracie Allen Drive. Designed by architectural firm HOK, the Pavilion brings patient care and translational research together in one site. The Advanced Health Sciences Pavilion houses the Cedars-Sinai's neurosciences programs, the Cedars-Sinai Heart Institute and Regenerative Medicine Institute laboratories, as well as outpatient surgery suites, an imaging area and an education center. [32] [33] [34] [35] [36] [37] [38] [39] [40]

Cedars-Sinai ranked as follows in the 2009 Los Angeles area residents' "Most Preferred Hospital for All Health Needs" ranking: [42]

Worth Magazine selected Cedars-Sinai Smidt Heart Institute as one of the United States' Top 25 Hospitals for Cardiac Bypass Surgery. [43]

Cedars-Sinai's Gynecologic Oncology Division was named among the nation's Top 10 Clinical Centers of Excellence by Contemporary OB/GYN in 2009. [44]

According to articles in the Los Angeles Times in 2009, Cedars-Sinai was under investigation for significant radiation overdoses of 206 patients during CT brain perfusion scans during an 18-month period. [64] [65] Since the initial investigation, it was found that GE sold several products to various medical centers with faulty radiation monitoring devices.[ citation needed]

State regulators had also found that Cedars-Sinai had placed the Quaid twins and others in immediate jeopardy by its improper handling of blood-thinning medication. [66]

In 2011, Cedars-Sinai again created controversy by denying a liver transplant to medical marijuana patient Norman Smith. They removed Mr. Smith from a transplant waiting list for "non-compliance of our substance abuse contract", [67] despite his own oncologist at Cedars-Sinai having recommended that he use the marijuana for his pain and chemotherapy. [68] Dr. Steven D. Colquhoun, director of the Liver Transplant Program, said that the hospital "must consider issues of substance abuse seriously", but the transplant center did not seriously consider whether Mr. Smith was "using" marijuana versus "abusing" it. [69] In 2012, Cedars-Sinai denied a liver transplant to a second patient, Toni Trujillo, after her Cedars-Sinai doctors knew and approved of her legal use of medical marijuana. In both cases, the patients acceded to the hospital's demand and stopped using medical marijuana, despite its therapeutic benefits for them, but were both sent six years back to the bottom of the transplant list. [70] [71] His death inspired Americans for Safe Access to lobby for the California Medical Cannabis Organ Transplant Act (AB 258), which was enacted in July 2015 to protect future patients from dying at the hands of medical establishments prejudiced against the legal use of medical cannabis. [72]

On June 23, 2014, an unencrypted employee laptop was stolen from an employee's home. The laptop contained patient Social Security numbers and patient health data. [73] On June 18 through June 24, 2013, six employees were terminated for inappropriately accessing 14 patient records around the time Kim Kardashian and Kanye West's daughter was born at the hospital. [74]

First developed by philanthropists Frederick and Marcia Weisman, Cedars-Sinai's modern and contemporary art collection dates to 1976 and includes more than 4,000 original paintings, sculptures, new media installations and limited-edition prints by the likes of Andy Warhol, Robert Rauschenberg, Richard Diebenkorn, Sam Francis, Claes Oldenburg, Willem de Kooning, Raymond Pettibon and Pablo Picasso. Ninety to 95 percent of the collection is on display at any given time. Nine large-scale works are located in courtyards, parking lots and public walkways throughout the approximately 30-acre campus. The collection consists entirely of gifts from donors, other institutions and occasionally the artists themselves. [75]