From Wikipedia, the free encyclopedia
"Cavaco" redirects here. For for the town, see Cavaco, Angola. For the surname, see Cavaco (surname).

The cavaquinho (pronounced [kɐvɐˈkiɲu] in Portuguese) is a small Portuguese string instrument in the European guitar family, with four wire or gut strings.

More broadly, cavaquinho is the name of a four-stringed subdivision of the lute family of instruments.

A cavaquinho player is called a cavaquista.

There are several forms of cavaquinho used in different regions and for different styles of music. Separate varieties are named for Portugal, Braga (braguinha), Minho (minhoto), Lisbon, Madeira, Brazil, and Cape Verde; other forms are the braguinha, ‘cavacolele’, cavaco, machete, and ukulele.

The Venezuelan concert cuatro is very nearly the same instrument, but somewhat larger.

The Brazilian cavaquinho is slightly larger than the Portuguese cavaquinho, resembling a small classical guitar. Its neck is raised above the level of the sound box, and the sound hole is usually round, like cavaquinhos from Lisbon and Madeira.

The Venezuelan concert cuatro is very nearly the same size and shape, but has its neck laid level with the sound box, like the Portuguese cavaquinho.

The cavaco is a smaller version of the Brazilian cavaquinho, similar in size to the Portuguese cavaquinho. It is part of a samba ensemble (see the international section, below). The name cavaco means “wood splint” in Portuguese – probably back-formed from the original name cavaquinho (“little wood splint”).

The machete is a steel-string version of the cavaquinho from Madeira. It is a predecessor of the modern ukulele. The Machete de Braga (“ Braga-style machete”) is called a braguinha.

The minhoto cavaquinho, associated with the Minho region in Portugal is similar to the viola braguesa. Its neck is on the same level as the body. Like the braguesa, the minhoto's sound hole was traditionally shaped like a stylized ray (fish); the shape is called “raia” in Portuguese.

The most common tuning in Portugal is C G A D (from lower to higher pitches).[ citation needed]

The standard tuning in Brazil is D G B D.[ citation needed]

Different forms of cavaquinho have been adapted in different regions. Varieties used outside of Iberia are found in Brazil, Cape-Verde, and Madeira. The locally iconic Caribbean region cuatro family and the Hawaiian ukuleles were both adapted from the cavaquinho. 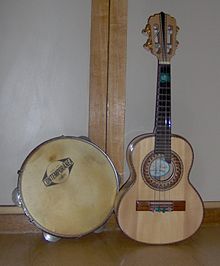 The cavaco – a small version of the Brazilian cavaquinho – is a very important instrument in Brazilian samba and choro music.

The samba cavaco is played with a pick, with sophisticated percussive strumming beats that connect the rhythm and harmony by playing the rhythm “comping”. Some of the most important players and composers of the Brazilian instrument are Waldir Azevedo, Paulinho da Viola, and Mauro Diniz. 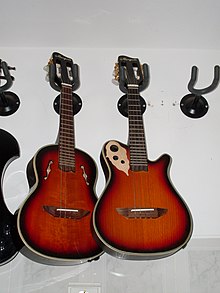 The Hawaiian ukulele also has four strings and a shape similar to the cavaquinho, although tuned differently – usually G C E A.

The ukulele is an iconic element of Hawaiian popular music, which spread to the continental United States in the early 20th century. [3] It was developed from the braguinha and rajão, brought to Hawaii in the late 19th century by Portuguese immigrants from Madeira Island. [4]

The machete was introduced into Hawaii by Augusto Dias, Manuel Nunes, and João Fernandes in 1879, which further influenced the development of the ukulele. [5]

Northern Latin-America and the Caribbean

The cuatro is a family of larger 4-stringed instruments derived from the cavaquinho that are popular in Latin-American countries in and around the Caribbean. Versions of the iconic Venezuelan cuatro are very similar to the Brazilian cavaquinho, with a neck like a Portuguese cavaquinho.

The origins of this Portuguese instrument are elusive. Author Gonçalo Sampaio holds that the cavaquinho and the guitar may have been brought to Braga by the Biscayans.[ citation needed]

Sampaio explains Minho region’s archaic and Hellenistic modes by possible survival of Greek influences on the ancient Gallaeci of the region, and stresses the link between this instrument and historical Hellenistic tetrachords.[ citation needed]