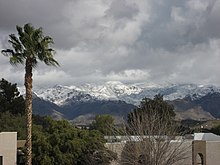 Santa Catalina Mountains in winter, viewed from the Catalina Foothills

The history of the modern development of the Catalina Foothills dates back to the early 1920s. Prior to that time, the Catalina Foothills area was primarily federal trust land and open range for cattle grazing. Beginning in the 1920s, John Murphey began purchasing property north of River Road in the foothills of the Santa Catalina Mountains. [3]

Around the same time, Josias Joesler, a Swiss architect, was retained to implement John Murphey's vision. Residential development in the Catalina Foothills began in the 1930s, and Joesler designed a number of the homes.

In 1931, residents of the Foothills organized the Catalina Foothills School District to serve the local school-aged population. [3] Murphey sold the school district the land for the first school building near East River Road and North Campbell Avenue, and Joesler designed the first school building. This building continues to house the school district's administration.

In 1936, Joesler and Murphey completed the building of St. Philip's in the Hills Episcopal Church at the corner of Campbell Avenue and River Road, which was then the main entrance to the Catalina Foothills Estates, [3] an example of Spanish Colonial Mission architecture. The land for the church was donated by Murphey, and Joesler donated his services for its design. The congregation paid only for construction.

The Catalina Foothills’ population continued to expand, as development continued northward on the Oracle Road corridor, and eastward along the Ina Road/Skyline Drive corridor. In 1963, the Skyline Country Club was established. In the 1980s, both La Paloma Resort and Ventana Canyon Resort were established.

While the Catalina Foothills community supports a population exceeding 50,000, most of the neighborhoods maintain a low-density and suburban character.

Popular attractions for residents and visitors in the Santa Catalina Mountains include: 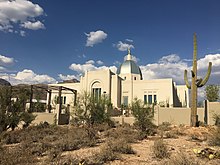 The Foothills area is also home to the DeGrazia Gallery in the Sun near the intersection of North Swan Road and East Skyline Drive. Built by artist Ted DeGrazia starting in 1951, the 10-acre (40,000 m2) property is listed on the National Register of Historic Places and features an eclectic chapel, an art gallery, and a free museum.

The Catalina Foothills also boasts one of the most unusual subdivisions in Tucson, called Sin Vacas (Without Cows). According to historian David Leighton, in an article published on April 8, 2014, in the Arizona Daily Star newspaper, the land where Sin Vacas subdivision now sits was owned at one point by steel magnate William J. “Jack” Holliday who was fond of desert wildlife and fenced in his property to keep cows out, and called it Rancho Sin Vacas (Ranch Without Cows). Developer Kelley Rollings later came along and purchased the land and along with his Spanish speaking office manager named some of the most interesting street names in Tucson, giving many of them names related to the Seven Deadly Sins, such as Calle Sin Pecado (Street Without Sin) and Plaza Sin Lujuria (Place Without Lust).

The Tucson Arizona Temple of The Church of Jesus Christ of Latter-day Saints is located in Catalina Foothills, near the intersection of Ina Road and Skyline Drive. It was completed in June 2017 and dedicated later that year in August. [8]