From Wikipedia, the free encyclopedia
Imposed for certain types of crimes

It can be imposed for treason, espionage, murder, large-scale drug trafficking, or attempted murder of a witness, juror, or court officer in certain cases.

As of 2020, all inmates currently under federal death sentences were condemned for aggravated murder. The U.S. federal government applies the death penalty in a few cases, the large majority of death sentences being imposed and carried out by state governments. [1]

The Federal Bureau of Prisons manages the housing and execution of federal death row prisoners. As of September 24, 2020, 55 offenders were on the federal death row, most of them at Federal Correctional Complex in Terre Haute, Indiana. [2]

The Crimes Act of 1790 defined some capital offenses: treason, murder, robbery, piracy, mutiny, hostility against the United States, counterfeiting, and aiding the escape of a capital prisoner. [3] The first federal execution was that of Thomas Bird on June 25, 1790, due to his committing "murder on the high seas". [4]

The use of the death penalty in U.S. territories was handled by federal judges and the U.S. Marshal Service.

Historically, members of the U.S. Marshals Service conducted all federal executions. [4] Pre-Furman executions by the federal government were normally carried out within the prison system of the state in which the crime was committed. Only in cases where the crime was committed in a territory, the District of Columbia, or a state without the death penalty was it the norm for the court to designate the state in which the death penalty would be carried out, as the federal prison system did not have an execution facility.

In the late 1980s, Senator Alfonse D'Amato, from New York State, sponsored a bill to make certain federal drug crimes eligible for the death penalty as he was frustrated by the lack of a death penalty in his home state. [5] The Anti-Drug Abuse Act of 1988 restored the death penalty under federal law for drug offenses and some types of murder. [6] President Bill Clinton signed the Violent Crime Control and Law Enforcement Act, expanding the federal death penalty in 1994. [7] In response to the Oklahoma City bombing, the Antiterrorism and Effective Death Penalty Act of 1996 was passed in 1996. Federal Correctional Complex, Terre Haute became the only federal prison to execute people and one of only three prisons to hold federally condemned people.

United States Penitentiary, Terre Haute, Indiana, the location of the federal death row for men and the federal execution chamber

Timothy McVeigh was executed on June 11, 2001, for his involvement in the Oklahoma City bombing where 168 people were killed. It was the first federal execution since 1963; it was broadcast on a closed circuit-television to survivors and victims' families. [9]

Among the most recent offenders sentenced to death by federal courts are Dzhokhar Tsarnaev in 2015 for his role in the Boston Marathon bombing that killed five people and injured several hundred others, including 16 who lost limbs; white supremacist Dylann Roof in 2017 for the Charleston church shooting where he killed nine people; and Gary Lee Sampson who was sentenced to death a second time in 2017 for two carjacking murders (after an original 2003 death sentence for the same crimes was vacated in 2011).

As of September 24, 2020, there are 55 offenders on federal death row, most of them at Federal Correctional Complex in Terre Haute, Indiana. The only woman on federal death row as of 2020, Lisa M. Montgomery, is held at Federal Medical Center, Carswell, in Fort Worth, Texas. [10] As of 2017 [update], aside from those at Terre Haute, three male death row inmates are held at ADX Florence and one is held at Springfield MCFP. [11] Two people have been re-sentenced since 1976 to life in prison and three had their sentences commuted to life in prison: one by President Bill Clinton in 2001, and two in 2017 by President Barack Obama, who commuted one death sentence handed down by a federal district court and one another issued by a court-martial. Both Clinton and Obama issued the commutations a few days before leaving office. [12]

On July 25, 2019, U.S. Attorney General William Barr announced that the federal government would resume executions using pentobarbital, rather than the three-drug cocktail previously used. Five convicted death row inmates were scheduled to be executed in December 2019 and January 2020. [13]

On November 20, 2019, U.S. District Judge Tanya S. Chutkan issued a preliminary injunction preventing the resumption of federal executions. Plaintiffs in the case argued that the use of pentobarbital may violate the Federal Death Penalty Act of 1994. [14] The injunction was upheld by the U.S. Court of Appeals for the District of Columbia Circuit and, on December 6, 2019, by the United States Supreme Court, but it told the court of appeals to rule on the case "with appropriate dispatch". Justices Alito, Gorsuch, and Kavanugh wrote that they believed the government would ultimately win the case and that they would have set a 60-day deadline for the court of appeals to finalize it. [15]

In January 2020, the Justice Department argued to the appeals court that when Congress declared that federal executions must be carried out "in the manner prescribed by the state" where inmates were convicted, it was referring to the general method of execution allowed in states, such as lethal injection, rather than the specific drugs to be used. [16]

In the federal system, the final decision to seek the death penalty rests with the United States Attorney General. This differs from states, where local prosecutors have the final say with no involvement from the state attorney general. [17]

The sentence is decided by the jury and must be unanimous.

Sentences of death handed down by a jury cannot be rejected by the judge. [18]

In case of a hung jury during the penalty phase of the trial, a life sentence is issued, even if a single juror opposed death (there is no retrial). [19]

The power of clemency belongs to the President of the United States.

These are the offenses which may result in the death penalty under the United States Code: [21]

The method of execution of federal prisoners for offenses under the Violent Crime Control and Law Enforcement Act of 1994 is that of the state in which the conviction took place. If the state has no death penalty, the judge must select a state with the death penalty for carrying out the execution. [22]

The federal government has a facility and regulations only for executions by lethal injection, but the United States Code allows U.S. Marshals to use state facilities and employees for federal executions. [23] [24] 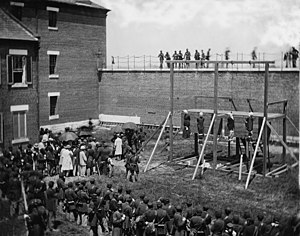 Four Presidents of the United States were murdered while in office. The assassination of Abraham Lincoln was tried by a military commission based on the military nature of the conspiracy. Charles Guiteau's trial was held in a civilian court of the District of Columbia where the assassination of James Garfield happened.

The assassin of William McKinley, Leon Czolgosz, was tried and executed for murder by New York state authorities. The accused assassin of John F. Kennedy, Lee Harvey Oswald, would presumably have been tried for murder by Texas state authorities had he not been killed two days later by Jack Ruby in the basement of the Dallas Municipal Building (then Dallas Police Department headquarters) while being transferred to the county jail. (Ruby himself was initially tried and convicted of murder in a Texas state court, but that was overturned by the Texas Court of Criminal Appeals and he died before he could be retried.) Only after Kennedy's death was it made a federal crime to murder the President of the United States.

The United States military has executed 135 people since 1916. The most recent person to be executed by the military is U.S. Army Private John A. Bennett, executed on April 13, 1961, for rape and attempted murder. Since the end of the Civil War in 1865, only one person has been executed for a purely military offense: Private Eddie Slovik, who was executed on January 31, 1945, after being convicted of desertion.

While members of the Armed Forces are usually tried in courts-martial, military commissions can be used to try non-soldiers accused of violations of the law of war. The Military Commissions Act of 2009 was passed by Congress in order to try the five remaining suspects of the September 11 attacks that killed 2,977 people and injured over 25,000 others.