Candon, officially the City of Candon ( Ilocano: Siudad ti Candon; Filipino: Lungsod ng Candon), is a 4th class city in the province of Ilocos Sur, Philippines. According to the 2015 census, it has a population of 60,623 people. [3]

Dubbed as the "Tobacco Capital of the Philippines" the city is the country's largest producer of Virginia-type tobacco.

This once small resort town is known for making the heaviest and largest kalamay, a sweet and sticky snack made from sticky rice, coconut milk and sugar, in the world. This city also has a rich historical background. In its legends, the name of the city is derived from the legendary "kandong" tree which is now but extinct in the area. Its patron saint is John of Sahagun and his feast day is celebrated every June 12. [5]

Candon is the center of the 2nd district of Ilocos Sur. Government District offices are all located in the city. The city supports more than 100,000 citizens in terms of commercial and industrial services.

Several theories exist about the etymology of the city. One is that the name of the city was derived from the now rare "candong" tree. It is said by locals that during Spanish times, the powerful chieftains of the area, after having a gathering called a "kaniaw," held a contest (called "gabbu," a wrestling contest) to decide the husband of Ineng, the daughter of the most powerful chieftain, Madal-ang, and his would-be successor, owing to his advancing age. The contest was held under the shade of the candong trees, the residence of Madal-ang. The winner was the chieftain named Kalinio, resident of the caves of Cauplasan who defeated Madal-ang and another chieftain named Abay-a from the caves of Cadanglaan. Kalinio and the daughter of the chieftain were wed under the shade of a candong tree in grandiose ceremonies.

During this wedding, a group of Spaniards, which included Captain Juan de Salcedo, passed by, and asked what was going on. Natives thought they were asking for the name of the tree, so they uttered, "Candong." Candon in Spanish would be pronounced as Candong.

Another theory is that the place was named after the town of Candon in Spain.

According to the city archives, Malayan settlers were the first residents of Candon City that later turned into a village. Settlers were mostly farmers, fishermen, woodsmen and craftsmen. The Village was then ruled by three local chieftains: Abay-a, Madalang and Kalinio. Madalang chose as his abode the shade of a gargantuan tree which stood in the center of the said village and under this large tree people converged to exchange pleasantries and goods. This is also where the elders and the chief settle disputes and offer advice. The Villagers named the large tree “Kandong”.

Upon the arrival of the Spanish colonizers in the 16th century, the symbolic tree was cut down upon orders of the friars and its lumber was used for the construction of the first Catholic Church in the area. The people were easily led into the new church and were converted to Catholicism. The Spaniards named the place Candon from their version of the “Kandong” tree. The cemetery yard in the Catholic Church located south of the Poblacion area was constructed in 1797. In 1780, the village was turned into a municipality. Under the Spanish rule, the village was quickly taken over by wealthy Spaniards employing the natives in conditions of near slavery. Famine occurred in 1881 and 1882. Then on March 25, 1898, a revolutionary government was declared and attacked the Spaniards. However, Spanish troops were able to re-occupy Candon. Most of the leaders and participants of the uprising were arrested and then summarily executed.

During the Japanese occupation in 1942, another revolution was staged. Several truckloads of Japanese forces and supplies perished along the national highway. However, the Japanese Soldiers retaliated back by burning the whole town in January 1942, which is considered the greatest event that ever happened in the history of Candon. Despite the hardships that the townsfolk went through during the World Wars, residents were steadfast to go through the process of redemption and rebuilding. And the tall acacia trees that now adorned the town plaza and municipal buildings are testimonies of the Candon's steadfastness. Large trees now spans alongside the National Highway of the Poblacion which towers up to 15 meters high and 20 feet in circumference. [6]

In the Charter of Candon City, Candon applied to become the second city in the Province of Ilocos Sur so it can undertake government programs with additional funding from the national government to benefit the people in the field of social services, economic growth, peace and order, health, education, agriculture and infrastructure development.

Like the "Kandong" tree of yore, Candon is just beginning to spread out its branches to reach out for the skies in its own bid to become the next city in Ilocos Sur. From the start of House Bill 7260 seeking to convert Candon into a component city was filed by then Congressman Eric D. Singson in the 10th Congress and later re-filed by Congresswoman Grace D. Singson in the 11th Congress. Owing to the merits and qualifications of Candon as the leading town in Southern Ilocos Sur, the bill easily got the approval of the Committees on Local Government in both House of Representatives and in the Senate.

Until recently the aspiration for Candon to become a city remained a dream, but its destiny inevitable when the counterpart Senate Bill No. 2242 was sponsored by no less than Senate President Aquilino "Nene" Pimentel Jr., Senators Frank Drilon, Sergio Osmeña III and all the members of the Senate Committee on Local Government. It was subsequently approved unanimously by the Senate in plenary session, and now it is up to the townspeople to embrace this honor with an equally unanimous "YES to Cityhood" vote. [7]

Candon City is situated in the lower central portion of the Province of Ilocos Sur. It has a "C" shape with elevations ranging from 10 – 500 ft above sea level. The city is 346 kilometres (215 mi) from Metro Manila and 61 kilometres (38 mi) from Vigan City, the provincial capital.

The climate is generally dry that usually occurs from the months of October to May. However, the southernmost portion is observed to be humid and rain is evenly distributed throughout the year while the eastern part is dry with rain not sufficiently distributed. August has the most rainfall while January and February have the least. The mean temperature in the province is 27 °C (81 °F). January is the coldest. [6] 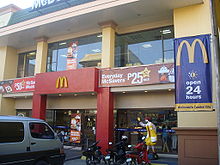 McDonald's Candon City, located along the National Highway, is the only 24-hour McDonald's store in Ilocos Sur

Candon City has a geographical setting and proximity to the national highway and other towns that encouraged greater mobility in terms of trade, economic, social and cultural activities. The Department of Trade and Industry termed the City as the "Center for Trade and Commerce" in Ilocos Sur.

Many adjacent towns frequent Candon for commercial activities, catering to the commercial needs of an estimated 100,000 population. The City also has a supermarket and shopping mall, banking and lending institutions, recreational facilities, tourism facilities, health and medical establishments.

The city is the center of trade and commerce in the 2nd district of Ilocos Sur. Urban growth has a linear pattern along major thoroughfares in the city center and the national highway.

Candon City is accessible via the McArthur National Highway, which is also the city's main thoroughfare. Other major streets in the city are 25 de Marzo Street and San Juan Street, both parallel to the National Highway. Quirino Boulevard is a secondary highway that connects the city proper to the upland barangays of Candon City and the upland municipalities of Ilocos Sur. The Darapidap Beach Road or the Samonte Boulevard where you can find the Muslim Mosque aside of it. This Road connects the seaside barangays to the urban center.

Buses provide long-distance trips to major cities like Manila, Baguio and Laoag. Mini-Buses provide short trips to neighboring municipalities and the nearby cities of Vigan and San Fernando, La Union. Major Bus Companies also established their terminals in the city, among them are: 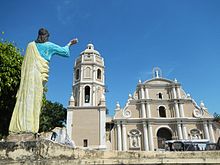 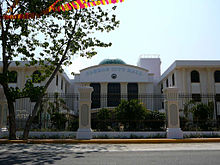 The official seal of the City of Candon was approved and adopted by the Sangguniang Panlungsod under Resolution No. 017-01 sponsored by Councilor David Gacusana. It is published to immortalize the “Cry of Candon” of March 1898 and to commemorate the ratification of its Cityhood charter under Republic Act 9018 on March 28, 2001.