From Wikipedia, the free encyclopedia
(Redirected from Candlenut)
"Kukui" redirects here. For the band, see Kukui (band).
Species of plant

Its native range is impossible to establish precisely because of early spread by humans, and the tree is now distributed throughout the New and Old World tropics. It grows to a height of 15–25 m (49–82 ft), with wide spreading or pendulous branches. The leaves are pale green, simple, and ovate, or trilobed or rarely five-lobed, with an acute apex, 10–20 cm (3.9–7.9 in) long. The nut is round, 4–6 cm (1.6–2.4 in) in diameter; the seed shell has white, oily, and fleshy kernel that contains a thin embryo surrounded by an endosperm. Its kernel serves as the source of oil, and is covered with a thin layer of secondary seed coat. [4]

The candlenut was first domesticated on the islands of Southeast Asia. Remains of harvested candlenuts have been recovered from archaeological sites in Timor and Morotai in eastern Indonesia, dated to around 13,000 and 11,000 BP, respectively. [5] Archaeological evidence of candlenut cultivation is also found in Neolithic sites of the Toalean culture in southern Sulawesi dated to around 3,700 to 2,300 BP. [6] [7] Candlenuts were widely introduced into the Pacific islands by early Austronesian voyagers and became naturalized to high volcanic islands. [8] [9] [10]

The Proto-Austronesian word for candlenut is reconstructed as *kamiri, with modern cognates including Hanunó'o, Iban, and Sundanese kamiri; Javanese and Malay kemiri; and Tetun kamii, but the Oceanian words for candlenut is believed to be derived, instead, from Proto-Austronesian *CuSuR which became Proto-Malayo-Polynesian *tuhuR, originally meaning "string together, as beads", referring to the construction of the candlenut torches. It became Proto-Eastern-Malayo-Polynesian and Proto-Oceanic *tuRi which is then reduplicated. Modern cognates including Fijian, Tongan, Rarotongan, and Niue tui-tui; and Hawaiian kui-kui or kukui. [11] 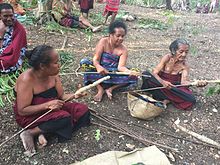 Both the nut and the oil that can be extracted from it are used. While mildly toxic when raw, [12] the nut is appreciated in many cultures once cooked or toasted. In Indonesian and Malaysian cuisine it is called kemiri in Indonesian or buah keras in Malay. On the Indonesian island of Java, it is used to make a thick sauce that is eaten with vegetables and rice.[ citation needed]

In the Philippines, the fruit and tree are traditionally known as lumbang, [13] after which Lumban, a lakeshore town in Laguna province, is named. Before the intrusion of non-native species, it was frequently used as a property-line manager, because its silvery underleaf makes the tree easy to distinguish from a distance. [14]

In the state of Sabah, Malaysian Borneo, the Dusun tribes call the fruit as godou and are used in tattoo-making as an optional ingredient for the ink. [15]

Outside of Southeast Asia, macadamia seeds are sometimes substituted for candlenuts when they are not available, as they have a similarly high oil content and texture when pounded. The flavor, however, is quite different, as the candlenut is much more bitter. At least one cultivar in Costa Rica has no bitterness, and an improvement program could likely produce an important food crop if nontoxic varieties can be selected and propagated.[ citation needed]

A Hawaiian condiment known as ʻ inamona is made from roasted kukui (candlenuts) mixed into a paste with salt. ʻInamona is a key ingredient in traditional Hawaiian poke. [16]

In ancient Hawaiʻi, kukui nuts were burned to provide light. The nuts were strung in a row on a palm leaf midrib, lit on one end, and burned one by one every fifteen minutes or so. This led to their use as a measure of time. Hawaiians extracted the oil from the nut and burned it in a stone oil lamp called a kukui hele po (light, darkness goes) with a wick made of kapa cloth.[ citation needed]

Hawaiians had many other uses for the tree, including leis from the shells, leaves, and flowers; ink for tattoos from charred nuts; a varnish with the oil; and fishermen would chew the nuts and spit them on the water to break the surface tension and remove reflections, giving them greater underwater visibility. A red-brown dye made from the inner bark was used on kapa and aho ( Touchardia latifolia cordage). A coating of kukui oil helped preserve ʻupena ( fishing nets).[ citation needed] The nohona waʻa (seats), pale ( gunwales) of waʻa ( outrigger canoes) were made from the wood. [17] The trunk was sometimes used to make smaller canoes used for fishing. [18] Kukui was named the state tree of Hawaii on 1 May 1959 [19] due to its multitude of uses. [20] It also represents the island of Molokaʻi, whose symbolic color is the silvery green of the kukui leaf.[ citation needed]

As recently as 1993 on the outlying islands of the kingdom of Tonga, candlenuts were chewed into sweet-scented emollient used during a traditional funerary ritual. They were used for making various sweet-smelling oils for the skin. [21]

The larvae of the coleopteran Agrianome fairmairei feed on dead candlenut wood, [25] and are considered a delicacy in New Caledonia. [26]

In Uganda, the seed is referred to as kabakanjagala, meaning "the king loves me" [27] and is traditionally used as an improvised toy to play a marbles game fondly called dool(oo).[ citation needed]

In Fiji, this nut is called sikeci and its oil is used in cosmetic products.[ citation needed]

Because the seeds contain saponin and phorbol, they are mildly toxic when raw. [12] However, the kukui seed oil has no known toxicity and is not an irritant, even to the eyes. [28]

In Maui, the kukui is a symbol of enlightenment, protection, and peace.[ citation needed] Kamapuaʻa, the hog-man fertility demigod, was said to be able to transform into a kukui tree. [29] One of the legends told of Kamapuaʻa: one day, a man beat his wife to death and buried her beneath Kamapuaʻa while he was in tree form.