Eschscholzia californica (California poppy, golden poppy, California sunlight, cup of gold) is a species of flowering plant in the Papaveraceae family, native to the United States and Mexico. It is an ornamental plant flowering in summer, with showy cup-shaped flowers in brilliant shades of red, orange and yellow (occasionally pink). It is also used as food or a garnish. It became the official state flower of California in 1903.

It is a perennial or annual plant growing to 5–60 in (13–152 cm) tall with alternately branching glaucous blue-green foliage. The leaves are alternately divided into round, lobed segments. The flowers are solitary on long stems, silky-textured, with four petals, each petal 2 to 6 cm (0.79 to 2.36 in) long and broad; flower color ranges through yellow, orange and red [1] (with some pinks). [1] Flowering occurs from February to September in the northern hemisphere (spring, summer, fall). The petals close at night (or in cold, windy weather) and open again the following morning, although they may remain closed in cloudy weather. [2] The fruit is a slender, dehiscent capsule 3 to 9 cm (1.2 to 3.5 in) long, which splits in two to release numerous small black or dark brown seeds. It survives mild winters in its native range, dying completely in colder climates. 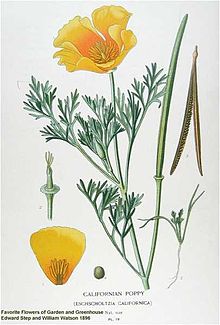 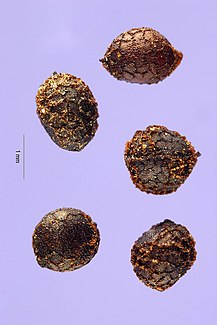 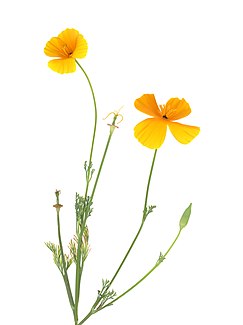 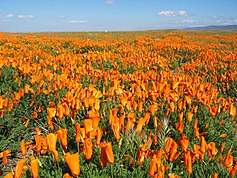 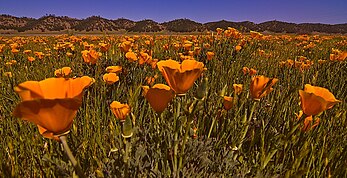 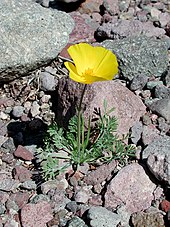 A UK study of meadow flowers that focused on commercial mixes, but which also tested various common plants such as ragwort and dandelion, ranked the California poppy highly in pollen production, although it did not produce a significant amount of nectar. On a per-flower basis it ranked second, with a rate of 8.3±1.1μl. The corn poppy, Papaver rhoeas, topped the list for per-flower pollen production with its rate of 13.3 ± 2.8μl. When measuring the entire capitulum the top two species were the ox-eye daisy, Leucanthemum vulgare, with 15.9 ± 2μl, and Cosmos bipinnatus, which had a rate nearly equivalent to that of the corn poppy. [4] As poppies are not wind-pollinated, their pollen poses no allergy risk via inhalation.

California poppy leaves are used as food or garnish, while the seeds are used in cooking. [5]

E. californica is drought-tolerant, self-seeding, and easy to cultivate. It is best grown as an annual in full sun and sandy, well-drained soil or loam. [6] Horticulturalists have produced numerous cultivars with a range of colors and blossom and stem forms. These typically do not breed true on reseeding. Seeds are often sold as mixtures. The following cultivars have gained the Royal Horticultural Society's Award of Garden Merit:- [7] 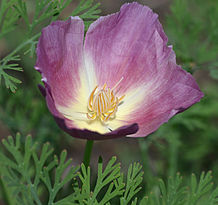 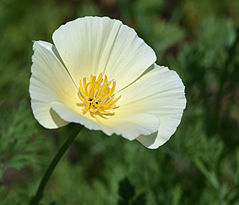 During the 1890s Sarah Plummer Lemmon advocated for the adoption of the golden poppy as the state flower of California, eventually writing the bill passed by the California Legislature and signed by Governor George Pardee in 1903. [11] [12] [13]

It was selected as the state flower by the California State Floral Society in December 1890, besting the Mariposa lily (genus Calochortus) and the Matilija poppy ( Romneya coulteri) by a wide margin, but the state legislature did not make the selection official until 1903. Its golden blooms were deemed a fitting symbol for the Golden State.

As the official state flower of California, Eschscholzia californica is pictured on welcome signs along highways entering California and on official Scenic Route signs.

To commemorate Meghan Markle's Californian origins, Clare Waight Keller included the golden poppy in the embroidery of Markle's wedding veil. [15] It is also included in the Duchess of Sussex's coat of arms, displayed with wintersweet in the compartment. [16]