California's major urban areas normally are thought of as two large megalopolises: one in Northern California and one in Southern California, separated from each other by approximately 382 miles or 615 km [1] (the distance from Los Angeles to San Francisco), with sparsely inhabited (relatively) Central Coast, Central Valley, and Transverse Ranges in between. Other ideas conceive of a single megalopolis encompassing both North and South, or a division of Coastal California vs. Inland California. These regional concepts are usually based on geographic, cultural, political, and environmental differences, rather than transportation and infrastructure connectivity and boundaries.

Notable conceptions of a California megalopolis

Futurists Herman Kahn and Anthony Wiener coined the name SanSan as an allusion to San Diego and San Francisco (along with BosWash and Chipitts) in The Year 2000 [2] [3] for a California megalopolis along the coast. The coastal emphasis does not conform to subsequent growth patterns extending to Metropolitan Sacramento and the Inland Empire.

Beyond Megalopolis, by Virginia Tech's Metropolitan Institute, defines two megapolitan areas which extend from California into Nevada: NorCal, which includes the Reno, Nevada area, and the Southland which encompasses Greater Los Angeles, the Inland Empire, and San Diego and includes Metropolitan Las Vegas.

California is linked by Interstate 5, U.S. 101, State Route 99 and State Route 1 (PCH) which start in the U.S.-Mexico border, Los Angeles, near Bakersfield and southern Orange County respectively, and terminate at the Oregon border (between Yreka and Ashland), the Oregon border (between Crescent City and Brookings), Red Bluff, and in northern Mendocino County respectively. The California High-Speed Rail, the first true high-speed rail network in the Americas, is planned to connect Sacramento and the Bay Area to Los Angeles and San Diego with high-speed trains capable of 220 mph (350 km/h) linking San Francisco and Los Angeles in two and a half hours. Construction began in August 2010 with the construction of the new San Francisco Transbay Terminal. [7] As of the 2010 Census, the combined population of all of California's metropolitan regions is nearly 28.9 million (excluding San Diego, Reno, and Las Vegas), about 9.37% of the total US population, while the entire state of California had an estimated population of 44.2 million in 2017.

The California Megalopolis with both the Northern and Southern megaregions would contain 3 of the 10 biggest cities in the US all with over 1 million each and 9 of the 50 biggest US cities, both the most of any megaregion in the country. On a global scale, the megapolitan area would contain three of the fifty largest cities in the Americas. The largest cities in descending order are: Los Angeles, San Diego, Tijuana, San Jose, San Francisco, Mexicali, Las Vegas, Fresno, Sacramento, Long Beach, Oakland, Bakersfield, Anaheim, and Santa Ana.

California's economy as a whole is the largest of any state in the United States and is the fourth largest economy in the world. [10] The Northern California megaregion is home to the Silicon Valley with major corporations such as: Cisco Systems, Apple Inc., Oracle, EBay, Yahoo!, Facebook, YouTube, Google, and Hewlett Packard, the San Francisco Financial District (home to headquarters of various financial and business firms such as VISA, Wells Fargo, and Union Bank of California and is the largest financial district outside New York City), Wine Country, and much of the Central Valley which is one of the world's most productive agricultural areas, producing 8% of the nation's total crops. The centers of major national government offices, such as the United States Court of Appeals for the Ninth Circuit, the Federal Reserve Bank of San Francisco, and the U.S. Mint, as well as the California State Capitol and the California Supreme Court are all located within the region. The Bay Area also has the largest concentration of multi-millionaire households of any metropolitan area in the country and the largest concentration of billionaires of any U.S. metropolitan area, almost more than the next three metropolitan areas combined. [11] 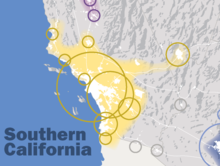 The Southern California megaregion is also a very important economic center in the U.S., and indeed also in Mexico, as it includes Tijuana, Mexico. Southern California is home to the Port of Los Angeles and Port of Long Beach (the first and second busiest container ports in the U.S. respectively) and the Port of San Diego. [12] The global center of the entertainment business, Southern California leads the world in the motion picture, television, and recorded music industry and is the home base for Hollywood, with studios such as The Walt Disney Company, ABC, Sony Pictures, Warner Bros., Universal Studios, MGM, Paramount Pictures, and 20th Century Fox headquartered here. Corporations such as Fox Sports Net, Guess, In-n-Out Burger, ARCO, Farmers, logistics, and many financial and banking companies are also based in the region. Southern California has long been the leading region in the U.S. for aviation and aerospace, and is one of the top five regions in the U.S. for the high-technology industry.

Southern California is also one of the world's largest tourist industries thanks to its famous beaches, entertainment districts such as L.A. Live and Sunset Boulevard, and theme parks including Disneyland, Knott's Berry Farm, and Universal Studios Hollywood. San Diego is an important port city, industrial, commercial, and shipbuilding center. It has a flourishing tourism industry, many research institutions, a large biomedical/biotechnology industry, and it is home to one of the largest concentrations of U.S. military bases and personnel of any large American city. Las Vegas is the largest city in Nevada, the world's second largest gambling/gaming center after Macau, and one of the fastest growing large cities and metropolitan areas in the United States.

The vast, relatively sparsely populated area of Central California weakens the proposal that California constitutes a single megalopolis. The northern and southern regions continue to grow toward one another, however, with much of this recent urbanization occurring not along the expensive and crowded coast itself – or even along the somewhat developed first tier of interior coastal valleys – but farther inland along a north–south axis through the midsection of the state in the Central Valley, Antelope Valley, Inland Empire and San Joaquin Valley regions, all comparatively more affordable areas which are becoming increasingly suburbanized as they are within commuting distance (albeit often a long commute) of the state's major coastal cities. [8] 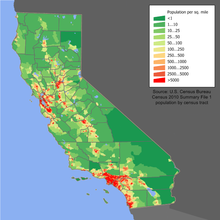