From Wikipedia, the free encyclopedia
(Redirected from California Palace of the Legion of Honor)
Art museum in California, United States of America

The Legion of Honor, formally known as the California Palace of the Legion of Honor, is a part of the Fine Arts Museums of San Francisco [1] (which also administers the de Young Museum). The name is used both for the museum collection and for the building in which it is housed.

Alma de Bretteville Spreckels painted by Richard Hall in 1924 (the year the Legion of Honor opened).

The Legion of Honor was the gift of Alma de Bretteville Spreckels, wife of the sugar magnate and thoroughbred racehorse owner/breeder Adolph B. Spreckels. [2]:9–10 The building is a full-scale replica, by George Applegarth and Henri Guillaume, of the French Pavilion at the 1915 Panama–Pacific International Exposition, which in turn was a three-quarter-scale version of the Palais de la Légion d'Honneur (also known as the Hôtel de Salm) in Paris, by Pierre Rousseau (1782). At the close of the exposition, which was located just a few miles away, the French government granted Spreckels permission to construct a permanent replica of the French Pavilion. World War I delayed the groundbreaking until 1921. Dedicated as a memorial to California soldiers killed in the war, [2]:7 the museum opened on Armistice Day, November 11, 1924. [3]

The museum building occupies an elevated site in Lincoln Park in the northwest of the city, with views over the nearby Golden Gate Bridge and the distant downtown skyline. 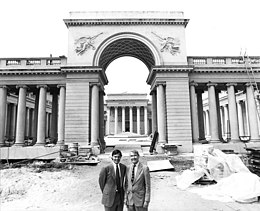 Architects Edward Larrabee Barnes and Mark Cavagnero during the 1995 renovation and expansion.

Between March 1992 and November 1995 the Legion underwent a major renovation that included seismic strengthening, building systems upgrades, restoration of historic architectural features, and an underground expansion that added 35,000 square feet. The Court of Honor was pierced by a pyramidal skylight opening onto the new gallery space below, a quotation in miniature of the Louvre Pyramid. The architects for the project were Edward Larrabee Barnes and Mark Cavagnero. [3]

The plaza and fountain in front of the Legion of Honor is the western terminus of the Lincoln Highway, the first improved road for automobiles across America. The terminus marker and an interpretive plaque are located in the southwest corner of the plaza and fountain, just to the left of the Palace. Dominating the classical plaza is Pax Jerusalemme, a modern sculpture by Mark di Suvero that stirred controversy at its installation in 2000. [4]

The Spreckels Gallery showcasing bronzes by Rodin; the pipes of the symphonic organ are hidden behind the trompe-l'œil canvas apse.

The Legion of Honor displays a collection spanning more than 6,000 years of ancient and European art and houses the Achenbach Foundation for Graphic Arts.

The Hall of Antiquities displays ancient works from Egypt, the Near East, Greece, and Rome, including sculptures, figurines, vessels, jewelry, and carved reliefs. Notable works include a 4,000-year-old carved wood figure of Seneb, an Egyptian royal scribe. The collection is supported in part by the Ancient Art Council, which offers a speakers program focusing on the ancient world. [5] [6]

The museum contains a representative collection of European art, the largest portion of which is French. Its most distinguished collection is of sculpture by Auguste Rodin. Casts of some of his most famous works are on display, including one of The Thinker in the Court of Honor. Other artists in the collection include El Greco, Titian, Rubens, Rembrandt, Boucher, David, Tiepolo, Gainsborough and many of the Impressionists and post-Impressionists— Degas, Renoir, Monet, Pissarro, Seurat, Cézanne, van Gogh and others.

Detail of the Ceiling from the Palacio de Altamira from Spain, c . 1482–1503, installed in the ceiling of gallery 3.

The Achenbach Foundation for Graphic Arts (AFGA) is responsible for the museum's collection of works on paper. With more than 90,000 items, the AFGA is the largest repository of works of art on paper in the western United States. The department is named for Moore and Hazel Achenbach, who gave the bulk of their collection to the city of San Francisco in 1948, and the remainder upon Moore Achenbach’s death in 1963. Many additional acquisitions form the basis for special collections within the department, such as the Anderson Collection of Graphic Arts. [7] Selections from the Logan collection, more than 400 books dating from the nineteenth century to the present, are regularly used in exhibitions in the Reva and David Logan Gallery of Illustrated Books located in a small room off the Hall of Antiquities. [8]

The museum's collection of European Decorative Arts includes a gilded Spanish ceiling from c. 1500; numerous items of furniture, including Horace Walpole’s commode of 1763 from Strawberry Hill House, west of London; and three period rooms, including the Salon Doré from the Hôtel de La Trémoille, Paris, said to be the only complete example of a pre-Revolutionary Parisian salon to be displayed anywhere. [9] [10]

The Bowles Porcelain Gallery displays an array of porcelain and pottery from England and continental Europe with a strong emphasis on the eighteenth century. Adjacent to the gallery is the Ceramic Study Center. [11]

The Contemporary Arts Program, which brings the work of living artists into dialogue with the building and the collections, was inaugurated in 2017 with an exhibition of more than 30 works by Urs Fischer installed throughout the museum. [12] Subsequent exhibitions have featured works and interventions by artists including Lynn Hershman Leeson, [13] Julian Schnabel, [14] and Alexandre Singh. [15]

Situated off the northwest corner of the Legion grounds is the Holocaust Memorial, a sculptural group of white-painted bronze by George Segal installed in 1984. Although not part of the Legion's collection, the sculpture is often seen by visitors to the museum. 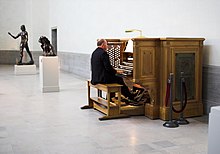 In 1924, John D. Spreckels commissioned the Ernest M. Skinner Company of Boston to build the symphonic organ, which is centrally located in the Spreckels Gallery (gallery 10). It was designed to blend into the museum's structure; its 4,500 pipes are not visible to visitors. The ceiling of the gallery is canvas so that the organ can be heard throughout the gallery and museum; the canvas ceiling is painted as a trompe-l'œil to resemble a marble apse. [16] Organ concerts are performed every Saturday at 4:00 p.m. [17]

The 316-seat James A. and Cynthia Fry Gunn Theater, located downstairs off the Hall of Antiquities, is a venue for chamber music concerts by the San Francisco Symphony and for lectures and other programs. Architect George Applegarth designed the circular theater and decorated it in the style of Louis XVI. The descending entrance stairways on either side are decorated with portraits by Nicolas de Largillière. [18] [19] The ceiling mural is The Apotheosis of the California Soldier by Spanish artist Julio Vila y Prades. [2]:95