The CONCACAF Gold Cup ( Spanish: Copa de Oro de la CONCACAF) is the main association football competition of the men's national football teams governed by CONCACAF, determining the continental champion of North America, Central America, and the Caribbean. The Gold Cup is held every two years. It was previously referred to as the CONCACAF Championship before being renamed to the CONCACAF Gold Cup starting in 1991. 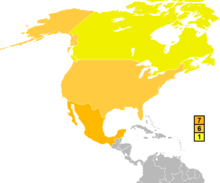 Winners of the CONCACAF Gold Cup up to 2019

Before the Confederation of North American (including Central America) and Caribbean Association Football (CONCACAF) was formed in 1961, association football in the region was divided into smaller, regional divisions. The two main bodies consisted of the Confederación Centroamericana y del Caribe de Fútbol (CCCF) founded in 1938 (consisting of Central America and most of the Caribbean) and the North American Football Confederation (NAFC) founded in 1946 (consisting of the North American nations of United States, Mexico, Canada, and Cuba). Each confederation held its own competition, the CCCF Championship and the NAFC Championship. The CCCF held 10 championships from 1941–'61, Costa Rica winning seven ('41, ’46, ’48, ’53, ’55, ’60, ’61), and one each by El Salvador ('43), Panama ('51) and Haiti ('57). The NAFC held four championships in 1947 and '49 and later, after 41 years of absence, in 1990 and '91 for the North American zone as the North American Nations Cup with Mexico winning three times ('47, ’49 & '91) and Canada winning once ('90) [2]

CONCACAF was founded in 1961 through the merging of NAFC and CCCF which resulted in a single championship being held for the continent. The first CONCACAF tournament was held in 1963 in El Salvador with Costa Rica becoming the first champion. The CONCACAF Campeonato de Naciones, as it was called, was held every two years from 1963 to 1973. The second tournament was held in Guatemala in 1965 when Mexico defeated the host country in the final of a six-team tournament. The 1967 competition was held in Honduras and saw a third champion crowned, Guatemala. Costa Rica won their second title as hosts in 1969, knocking off Guatemala, while two years later, Mexico won their second championship as the tournament moved to Trinidad & Tobago, the first time in the Caribbean. In 1973, the tournament kept the same format of six teams playing a single round-robin, but there were bigger stakes attached: CONCACAF's berth in the FIFA World Cup tournament in 1974. In Port-au-Prince, Haiti, the host country pulled off an upset by winning the tournament and claiming a spot in the World Cup in West Germany.

With the Campeonato de Naciones doubling as the final World Cup qualifying tournament, the next two editions were held in Mexico City and Tegucigalpa, Honduras in 1977 and 1981, respectively. In each case the host country was crowned champion and earned a spot in the World Cup. In 1985 and 1989, the winner of the World Cup qualifying tournament was again crowned Confederation champion. Canada and Costa Rica were named champions in 1985 and 1989, receiving a trophy. [3][ better source needed]

In 1990, CONCACAF renamed and restructured the CONCACAF Championship as the CONCACAF Gold Cup, with the United States hosting the first competition in 1991, and hosting or co-hosting every subsequent iteration of the tournament (as of 2019). The host country was the inaugural champion of the eight-team tournament. Mexico dominated the remainder of the decade, winning three consecutive CONCACAF Gold Cup titles in 1993, 1996 and 1998.

In 1996, the Gold Cup field included its first guest team, the defending FIFA World Cup Champions Brazil. Guests were invited to participate in the six Gold Cup tournaments from 1996 to 2005. Starting with the 2000 Gold Cup, the tournament field was increased to twelve teams and for the 2007 tournament, the Gold Cup again was contested exclusively by nations within CONCACAF.

Since the formation of the Gold Cup in 1991, the CONCACAF Championship has been won eight times by Mexico, six times by the United States, and once by Canada. Runners-up include Brazil, Colombia, Costa Rica, Honduras, Panama, and Jamaica.

Before 2015, when the Gold Cup did not fall in the same year as the FIFA Confederations Cup, the winner, or highest-placed team that is a member of both CONCACAF and FIFA, qualified for the next staging of that tournament. In 2015, the winners of the previous two Gold Cups (the 2013 and 2015 editions) faced each other in CONCACAF Cup – a playoff to determine the CONCACAF entrant to the 2017 Confederations Cup. [4]

Like most international football tournaments, the CONCACAF Gold Cup has featured official songs for each tournament since 2002. Unlike most larger tournaments, such as the FIFA World Cup, the songs were usually mainstream music released at around the same year of each tournament, in English or Spanish (the tournament's official languages) as well as several other languages.