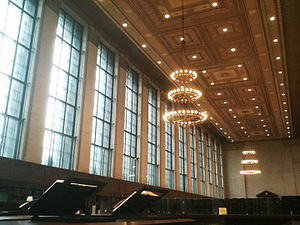 Butler Library is located on the Morningside Heights campus of Columbia University at 535 West 114th Street, in Manhattan, New York City. It is the university's largest single library with over 2 million volumes, [1] as well as one of the largest buildings on the campus. The Neoclassical style ( Stripped Classicism) building was built in 1931–1934 to a design by James Gamble Rogers.

Butler was built in 1931–1934 and was designed by James Gamble Rogers in the Neoclassical style. The new library was funded by Edward Harkness, a Columbia alumnus who was also donor of Yale's residential college system and Harvard's houses.

Originally called "South Hall", in 1946 it was renamed for Nicholas Murray Butler, the president of Columbia University from 1902–1945. Butler first proposed a new library building when plans to expand the Low Memorial Library did not come to fruition. [2]

Butler Library underwent major renovations, which were completed in several stages, between 1995 and 2009. [3] In 2018 the library was targeted by student activists, calling for "decolonialization" of the campus, including replacing inscriptions and statues to facilitate better representation of women and marginalized people. [4]

The library's facade features a colonnade of columns in the Ionic order above which are inscribed the names of writers, philosophers, and thinkers: Homer, Herodotus, Sophocles, Plato, Aristotle, Demosthenes, Cicero, and Vergil [5] on the northern face, towards College Walk and the Low Library. Cervantes, Shakespeare, Milton, Voltaire, and Goethe on the east, facing John Jay Hall and Wallach Hall; and Horace, Tacitus, St. Augustine, St. Thomas Aquinas, and Dante on the western facade, facing Alfred Lerner Hall and Carman Hall.

The large mural in the entrance lobby, titled Videbimus Lumen, (based on the university's motto In Lumine Tuo Videbimus Lumen, or In Thy Light Shall We See Light) was painted in 1934 by Eugene Francis Savage. The composition is anchored by the figure of Athena, echoing the large sculpture of Alma Mater in the center of the campus. The mural contains references to light, social struggle, fascism, and the architecture of Columbia and New York City. [6]

Several books and screenplays have been written in Butler, including Nobel Prize‑winning novelist Orhan Pamuk's The Black Book and the script for the film Capote. It also plays a role in Paul Auster's 2009 novel Invisible: the novel's main protagonist, Adam Walker, takes a job as a page in the library's stacks. This section of the novel is set in 1967 when the stacks were closed to library users. [7] The page's task was to retrieve requested books from the stacks and re‑shelve returned books. The library is also referenced in Erica Jong's Fear of Flying.