From Wikipedia, the free encyclopedia
(Redirected from British American)
This article is about people of the U.S. with ancestral roots in the United Kingdom. For other uses, see Great Britain.
Not to be confused with Anglo-Americans.

British American usually refers to Americans whose ancestral origin originates wholly or partly in the United Kingdom ( England, Scotland, Wales and Northern Ireland). In the 2017 American Community Survey 1,891,234 individuals or 0.6% of the responses self-identified as British. [1][ failed verification] It is primarily a demographic or historical research category for people who have at least partial descent from peoples of Great Britain and the modern United Kingdom, i.e. English, Scottish, Welsh, Scotch-Irish, Manx and Cornish Americans. There has been a significant drop overall, especially from the 1980 census where 49.59 million people reported English ancestry.

Demographers regard current figures as a serious under-count, as a large proportion of Americans of British descent have a tendency to identify as 'American' since 1980 where over 13.3 million or 5.9% of the total U.S. population self-identified as "American" or "United States", this was counted under "not specified". [3] This response is highly overrepresented in the Upland South, a region settled historically by the British. [4] [5] [6] [7] [8] [9] Many of mixed European ancestry, may identify with a more recent and differentiated ethnic group. [10] Of the top ten family names in the United States (2010), seven have English origins or having possible mixed British Isles heritage, the other three being of Spanish origin. [11]

Not to be confused when the term is also used in an entirely different (although possibly overlapping) sense to refer to people who are dual citizens of both the United Kingdom and the United States.

Americans of British heritage are often seen, and identify, as simply " American" due to the many historic, linguistic and cultural ties between Great Britain and the U.S. and their influence on the country's population. A leading specialist, Charlotte Erickson, found them to be ethnically "invisible". [12] This may be due to the early establishment of British settlements; as well as to non-English groups having emigrated in order to establish significant communities. [13]

Table below shows the results from 1980 when ancestry was first collected by the U.S. census and the 2010 American Community Survey. Response rates for the ancestry question was 90.4% in 1990 and 80.1% in 2000 for the total US population.

According to estimates by Thomas L. Purvis (1984), published in the European ancestry of the United States, gives the ethnic composition of the American colonies from 1700 to 1755. British ancestry in 1755 were estimated to be 52% English and Welsh, 7.0% Scots-Irish and 4% Scottish. [20]

The ancestry of the 3,929,214 population in 1790 has been estimated by various sources by sampling last names in the very first United States official census and assigning them a country of origin. [21] There is debate over the accuracy between the studies with individual scholars and the Federal Government using different techniques and conclusion for the ethnic composition. [22] [21] A study published in 1909 titled A Century of Population Growth by the Census Bureau estimated the British origin combined were around 90% of the white population. [23] [24] [25]

The 1980 census was the first that asked people's ancestry. [30] The 1980 United States Census reported 61,327,867 individuals or 31.67% of the total U.S. population self-identitfied as having British descent. In 1980 16,418 Americans reported ‘Northern Islander’. No Scots-Irish (descendants of Ulster-Scots) ancestry was recorded, however over ten million people identified as Scottish. [31] This figure fell to over 5 million each in the following census when the Scotch-Irish were first counted. [32]

Following are the top 10 highest percentage of people of English, Scottish and Welsh ancestry, in U.S. communities with 500 or more total inhabitants (for the total list of the 101 communities, see references) [37] [38] [39]

The British diaspora consists of the scattering of British people and their descendants who emigrated from the United Kingdom. The diaspora is concentrated in countries that had mass migration such as the United States and that are part of the English-speaking world. A 2006 publication from the Institute for Public Policy Research estimated 5.6 million British-born people lived outside of the United Kingdom. [40] [41]

After the Age of Discovery the British were one of the earliest and largest communities to emigrate out of Europe, and the British Empire's expansion during the first half of the 19th century saw an "extraordinary dispersion of the British people", with particular concentrations "in Australasia and North America". [42]

The British Empire was "built on waves of migration overseas by British people", [43] who left the United Kingdom and "reached across the globe and permanently affected population structures in three continents". [42] As a result of the British colonization of the Americas, what became the United States was "easily the greatest single destination of emigrant British". [42]

Historically in the 1790 United States Census estimate and presently in Australia, Canada and New Zealand "people of British origin came to constitute the majority of the population" contributing to these states becoming integral to the Anglosphere. [43] There is also a significant population of people with British ancestry in South Africa.

An English presence in North America began with the Roanoke Colony and Colony of Virginia in the late-16th century, but the first successful English settlement was established in 1607, on the James River at Jamestown. By the 1610s an estimated 1,300 English people had travelled to North America, the "first of many millions from the British Isles". [44] In 1620 the Pilgrims established the English imperial venture of Plymouth Colony, beginning "a remarkable acceleration of permanent emigration from England" with over 60% of trans-Atlantic English migrants settling in the New England Colonies. [44] During the 17th century an estimated 350,000 English and Welsh migrants arrived in North America, which in the century after the Acts of Union 1707 was surpassed in rate and number by Scottish and Irish migrants. [45] 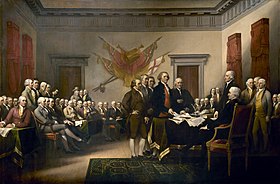 John Trumbull's famous painting, Declaration of Independence. Most of the Founding Fathers had British ancestors.

The British policy of salutary neglect for its North American colonies intended to minimize trade restrictions as a way of ensuring they stayed loyal to British interests. [46] This permitted the development of the American Dream, a cultural spirit distinct from that of its European founders. [46] The Thirteen Colonies of British America began an armed rebellion against British rule in 1775 when they rejected the right of the Parliament of Great Britain to govern them without representation; they proclaimed their independence in 1776, and subsequently constituted the first thirteen states of the United States of America, which became a sovereign state in 1781 with the ratification of the Articles of Confederation. The 1783 Treaty of Paris represented Great Britain's formal acknowledgement of the United States' sovereignty at the end of the American Revolutionary War. [47]

In the original 13 colonies, most laws contained elements found in the English common law system. [48]

The vast majority of the Founding Fathers of the United States were of mixed British extraction. Most of these were of English descent, with smaller numbers of those of Scottish, Irish or Scots-Irish, and Welsh ancestry. A minority were of high social status and can be classified as White Anglo-Saxon Protestant (WASP). Many of the prewar WASP elite were Loyalists who left the new nation. [49] 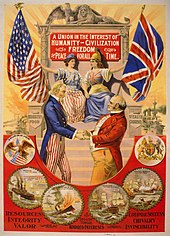 Uncle Sam embracing John Bull, while Britannia and Columbia hold hands and sit together in the background (1898).

Nevertheless, longstanding cultural and historical ties have, in more modern times, resulted in the Special Relationship, the exceptionally close political, diplomatic and military co-operation of United Kingdom – United States relations. [54] Linda Colley, a professor of history at Princeton University and specialist in Britishness, suggested that because of their colonial influence on the United States, the British find Americans a "mysterious and paradoxical people, physically distant but culturally close, engagingly similar yet irritatingly different". [55]

For over two centuries (1789-1989) of early U.S. history, all Presidents with the exception of two (Van Buren and Kennedy) were descended from the varied colonial British stock, from the Pilgrims and Puritans to the Scotch-Irish and English who settled the Appalachia. [56]

Much of U.S. culture shows influences from nation states of British culture. Colonial ties to Great Britain spread the English language, legal system and other cultural attributes. [57] Historian David Hackett Fischer has posited that four major streams of immigration from the British Isles in the colonial era contributed to the formation of a new American culture, summarised as follows:

Fischer's theory acknowledges the presence of other groups of immigrants during the colonial period, both from the British Isles (the Welsh and the Highland Scots) and not (Germans, Dutch, and French Huguenots), but believes that these did not culturally contribute as substantially to the United States as his main four.

Apple pie – New England was the first region to experience large-scale English colonization in the early 17th century, beginning in 1620, and it was dominated by East Anglian Calvinists, better known as the Puritans. Baking was a particular favorite of the New Englanders and was the origin of dishes seen today as quintessentially "American", such as apple pie and the oven-roasted Thanksgiving turkey. [62] "As American as apple pie" is a well-known phrase used to suggest that something is all-American.

Harley-Davidson – The Davidson brothers were of Scottish descent (William. A., Walter and Arthur Davidson) and William S. Harley of English descent. Along with Indian Motorcycle Manufacturing Company was the largest and most recognizable American motorcycle manufacturer. [63]

Baseball - The earliest recorded game of base-ball for which the original source survives, involved the family of George II of Great Britain, played indoors in London in November 1748. The Prince is reported as playing "Bass-Ball" again in September 1749 in Walton-on-Thames, Surrey, against Lord Middlesex. [64] The English lawyer William Bray wrote in his diary that he had played a game of baseball on Easter Monday 1755 in Guildford, also in Surrey. [65] [66] English lawyer William Bray recorded a game of baseball on Easter Monday 1755 in Guildford, Surrey; Bray's diary was verified as authentic in September 2008. [67] [68] This early form of the game was apparently brought to North America by British immigrants. The first appearance of the term that exists in print was in " A Little Pretty Pocket-Book" in 1744, where it is called Base-Ball. Today, Rounders which has been played in England since Tudor times holds a similarity to Baseball. Although, literary references to early forms of "base-ball" in the United Kingdom pre-date use of the term "rounders". [69]

The " Grand Union Flag" which served as the U.S. national flag from 1776 to 1777; the thirteen stripes represent the original Thirteen colonies.

The Grand Union Flag is considered to be the first national flag of the United States. [70] The design consisted of 13 stripes, red and white, representing the original Thirteen Colonies, the canton on the upper left-hand corner bearing the British Union Flag, the red cross of St. George of England with the white cross of St. Andrew of Scotland. The flag was first flown on December 2, 1775 by John Paul Jones (then a Continental Navy lieutenant) on the ship Alfred in Philadelphia). [71]

In addition, some places were named after the kings and queens of the former kingdoms of England and Ireland. The name Virginia was first applied by Queen Elizabeth I (the "Virgin Queen") and Sir Walter Raleigh in 1584., [80] the Carolinas were named after King Charles I and Maryland named so for his wife, Queen Henrietta Maria (Queen Mary). The Queens in New York was named after Catherine of Braganza (Queen Catherine), the wife of the King Charles II. [81]