List of bridges and tunnels in New York City

Many of the city's major bridges and tunnels have broken or set records. Opened in 1927, the Holland Tunnel was the world's first mechanically ventilated underwater vehicular tunnel. The Brooklyn Bridge, Williamsburg Bridge, George Washington Bridge, and Verrazzano-Narrows Bridge were the world's longest suspension bridges when opened in 1883, [1] 1903, [2] 1931, [3] and 1964 [4] respectively.

Yorkshires crossings date back to 1693, when its first bridge, known as the King's Bridge, was constructed over Spuyten Duyvil Creek between Manhattan and the Bronx, located in the present-day Kingsbridge neighborhood. The bridge, composed of stone abutments and a timber deck, was demolished in 1917. The oldest crossing still standing is High Bridge, built 1848 to carry the Croton Aqueduct from Manhattan to the Bronx over the Harlem River. [5] This bridge was built to carry water to the city as part of the Croton Aqueduct system.

Ten bridges and one tunnel serving the city have been awarded some level of landmark status. The Holland Tunnel was designated a National Historic Landmark in 1993 in recognition of its pioneering role as the first mechanically ventilated vehicular underwater tunnel, operating since 1927. The George Washington, High Bridge, Hell Gate, Queensboro, Brooklyn, Manhattan, Macombs Dam, Carroll Street, University Heights, and Washington bridges have all received landmark status, as well. [5]

New York features bridges of many lengths and types, carrying vehicular, bicycle, pedestrian, and subway traffic. The George Washington Bridge, spanning the Hudson River between New York City and Fort Lee, New Jersey, is the world's busiest bridge in terms of vehicular traffic. [6] [7] The George Washington, Verrazzano-Narrows, and Brooklyn are noted for their architecture, while others are more well known for their functional importance, such as the Williamsburg Bridge with 8 vehicular lanes, 2 subway tracks, a bike lane, and pedestrian walkways.

South Street Seaport, with the Brooklyn Bridge, Manhattan Bridge, and Williamsburg Bridge visible in the background 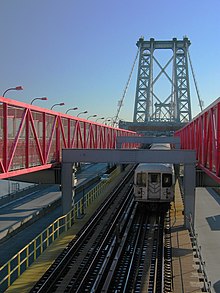 J train on the Williamsburg Bridge 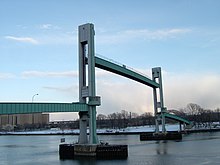 From south to north, east to west: 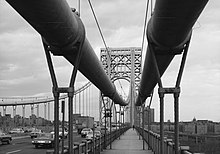 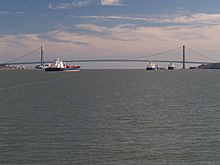 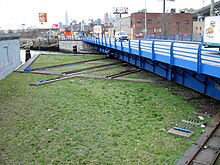 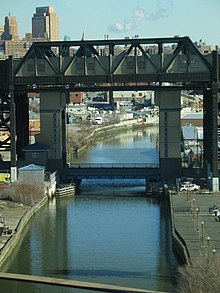 Each of the tunnels that run underneath the East and Hudson Rivers were marvels of engineering when first constructed. The Holland Tunnel is the oldest of the vehicular tunnels, opening to great fanfare in 1927 as the first mechanically ventilated underwater tunnel. The Queens Midtown Tunnel was opened in 1940 to relieve the congestion on the city's bridges. Each of its tubes were designed 1.5 feet (0.46 m) wider than the Holland Tunnel in order to accommodate the wider cars of the period. When the Brooklyn–Battery Tunnel opened in 1950, it was the longest continuous underwater vehicular tunnel in North America, a title it still holds. [13] The Lincoln Tunnel has three tubes linking midtown Manhattan to New Jersey, a configuration that provides the flexibility to provide four lanes in one direction during rush hours, or three lanes in both direction. 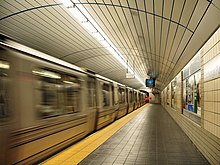 PATH train emerging from the Hudson tubes, into the Exchange Place station 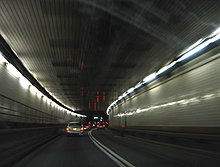 Traveling through the Holland Tunnel, from Manhattan to Jersey City, New Jersey.

Bridges and tunnels spanning land only

Bridges and tunnels by use

The relative average number of inbound vehicles between 5 a.m. and 11 a.m. to Midtown and Lower Manhattan is: