Brickell was settled in the modern era in the mid-19th century by early pioneers, growing to become Miami's " Millionaire's Row" in the early 20th century after the construction of lavish mansions along Brickell Avenue by Mary Brickell. By the 1970s, office towers, hotels and apartments began replacing the historic mansions. Brickell overtook the city's historic central business district to the north, as one of the largest financial districts in the United States. With a fast-growing residential population, Brickell is Miami's most dense neighborhood, with a 2010 population of about 31,000. [3]

Brickell Magazine is a magazine covering Brickell and Downtown Miami. Launched in 2008, it is published by TAG Media, Inc. Jorge Arauz is the editor-in-chief. [4]

Brickell is a dense, high-rise residential neighborhood with many upscale, luxury condominium and apartment towers. Brickell Avenue, Brickell's main north–south avenue and along Miami Avenue, home to many popular Miami restaurants, shops and places of entertainment. A few hundred feet east of the northeastern side of Brickell is Brickell Key, a gated island of upscale, high-rise residential and hotel towers. As of 2009 [update], over 190,000 office employees work in greater Downtown. [5] Today, greater Downtown Miami is one of the fastest-growing neighborhoods in Miami, booming from 40,000 residents in 2000 to 80,000 in 2010. Brickell is served by the Miami Metrorail at the Brickell station and by 5 stations of the Metromover's Brickell Loop.

As South Florida's financial district, Brickell is the core of Miami's banking, investment, and financial sectors. Additionally, along with Downtown Miami, Brickell has most of the state's foreign consulates, including the consulates of Argentina, Brazil, Chile, Dominican Republic, Ecuador, France, Guatemala, Japan, Mexico, the Netherlands, Peru, Switzerland, Trinidad and Tobago, and the United Kingdom, amongst others. [6]

Aerial of Brickell looking down Brickell Avenue from Icon Brickell.

Although Brickell has traditionally been known as a financial district, in recent years, construction of numerous condominium and apartment towers in Brickell, has extended the upscale residential neighborhood feel of lower Brickell into upper Brickell. Recent construction in Brickell has also enlarged the urban core of Brickell from Brickell Avenue west to the Metrorail line, with new office and residential towers, such as Axis at Brickell Village. As of 2010, 80,000 residents live in Brickell, among them, famous celebrities such as José José, Luis Miguel, Clinton Portis, Jennifer Lopez and Marc Anthony. [9]

At the center of Brickell is Mary Brickell Village, with an assortment of restaurants, boutiques, services that create a gathering area for high-class retail and restaurants. Some the best and most well-known names are leasing space in the project. The project is designed after a French-style village and attracts social gathering and entertainment.

To the north of Brickell is Downtown, with most of the area's public elementary schools and Miami Dade College's Wolfson Campus. Downtown is also home to the Miami Main Library, as well as various parks, theatres, museums, and sporting venues. South of Brickell is Coconut Grove, with Mercy Hospital, CocoWalk, Dinner Key, Villa Vizcaya, as well as many historic sites and parks. Coconut Grove also has many of Miami's best private schools, such as Ransom Everglades, Carrollton School of the Sacred Heart, and Immaculata-Lasalle High School.

West of Brickell is Little Havana, extending from SW 8th St westward. East of Brickell is Biscayne Bay, and eastward along the Rickenbacker Causeway, is Virginia Key and Key Biscayne. Both keys have many public beaches, nature preserves, parks, and various other cultural venues. Also east, along the MacArthur Causeway is South Beach.

An aerial of the Brickell area distinctly illustrating the boundaries.

Historically, all of Brickell was a wealthy suburb. As the downtown area expanded, the northeastern part of Brickell adopted high-density zoning that allowed high rise construction centered around Brickell Avenue, while south of 15th Street zoning remains highly limited with the exception of the very coastline east of Brickell Avenue. West of the Metrorail line, "west Brickell" melded with Little Havana until sweeping gentrification took place in the 2010s. The subdivisions of Brickell are recognized by the Downtown Development Authority. [10]

West Brickell is a sub-neighborhood of Brickell, west of the Metrorail line (SW 1st Avenue), and east of I-95, south of the Miami River, and north of SE 15th Road (Broadway). It is primarily a residential neighborhood, made up mostly of low to mid-rise apartment buildings. In the 2010s Miami condominium boom that began in 2012, interest in Brickell spilled over into West Brickell, with mid-century and prewar buildings being replaced by larger buildings. However, they included affordable housing and were generally non-luxury.

South Brickell is a sub-neighborhood of Brickell, south of SE 15th Road (Broadway) to the Rickenbacker Causeway, east of I-95, west of Biscayne Bay. It is primarily a residential neighborhood with single-family homes from the early-1900s along South Miami Avenue and high-rise residential towers along the east side of Brickell Avenue. [1]

Brickell was often referred to as the "Brickell Financial District", or just "Financial District", during the time of large-scale commercial office development, including major banks building headquarters there. The " financial district" area is what today comprises the core of Brickell, which has become overtaken by high rise residential buildings, and is hence referred to as simply "Brickell". 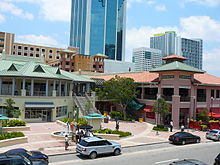 The Shops at Mary Brickell Village is a popular dining and shopping destination in Brickell.

Brickell is a highly educated and affluent neighborhood. As of 2014, an estimated 75% of residents older than 25 hold at least a bachelors level degree with 34% holding an advanced degree. The approximate average household income of $125,500 is more than twice the average for the City of Miami. [12] 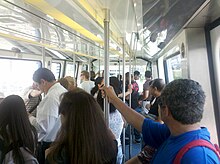 Metromover is a popular way of getting around the Downtown area. It connects the area's neighborhoods and can get very busy during rush hour.

Places of worship in the Brickell neighborhood include: [13] 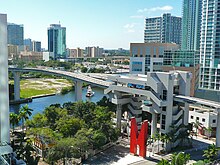 The Riverwalk Station in Downtown Miami is on the Metromover's Brickell Loop.

Brickell is served by Metrobus throughout the area, the Miami Metrorail, and the Metromover: 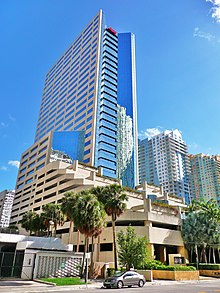 Public Transportation in the Downtown/Brickell area is used more than in any other part of Miami and is a vital part of Brickell life. Metrorail, Miami's heavy rail system, has one station in Brickell at the Brickell Station. In addition to Metrorail, the Metromover train system runs 3 lines throughout Downtown (the Downtown Loop, the Omni Loop, and the Brickell Loop). The Metromover connects with Metrorail and is free. Metromover stations can be found at roughly every two blocks in Brickell.

Metrorail has stops throughout Miami with connections to Miami International Airport, all Miami-Dade County bus lines, Tri-Rail and Amtrak. The main bus station in Downtown is located next to the Arsht Center at the Adrienne Arsht Center Station.

As an urban and pedestrian-friendly area with an extensive public transit network, Brickell (along with Downtown, Omni, and South Beach) is one of the areas in Miami where a car-free lifestyle is commonplace. Many Brickellites get around by foot, bicycle, Metromover or by taxi. The Metromover is a popular alternative to walking in the area, especially on rainy, hot or cold days, as the Metromover is free, and stations are located roughly every two blocks throughout the area.

Recently, the City of Miami, along with the Downtown Development Authority, has begun bicycle initiatives promoting citywide bike parking and bike lanes, that have made bicycling much more popular for residents. Bike lanes and bike sharrows are currently planned for the majority of Downtown streets to be painted by the end of 2010. Decobike, the popular bike sharing program in Miami Beach, has announced a launch in Brickell/Downtown Miami in mid 2014. The Venetian Causeway is a popular bicycle commuter route that connects South Beach to Downtown. The Rickenbacker Causeway is very popular on weekends for recreational bicyclists, and often, bicycles can outnumber cars on the causeway. [14]

Taxis are popular in Brickell, especially from Brickell to South Beach, Design District or to Coconut Grove. Since many Brickell residents choose to not have cars, taxis are also popular for rides within Downtown neighborhoods, especially after midnight when the Metromover stops running. Taxis can be hailed on the street, or phoned.

Florida's previous tallest building, the Four Seasons Hotel and Tower, is in Brickell. 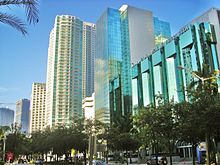 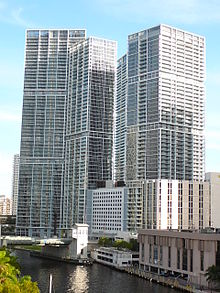 The Icon Brickell complex marks the northern entrance to the Brickell Financial District on Brickell Avenue.

With rapid urbanization over the decades, very little remains of the original character of Brickell. Brickell was originally platted for mansions and large homes by Mary Brickell, which thus led to the name "Millionaire's Row." With the growth of the city, especially in the 1970s onwards, Brickell's character began to change with the construction of high-rise office towers along Brickell Avenue, and high-rise residential towers in lower Brickell, south of SE 15th Road (Broadway). A commercial boom in the 1980s, brought mass construction of office towers to Brickell, and subsequent construction, would further change the neighborhood into the dense, urban, residential and commercial neighborhood it is today. Some of the historic buildings remaining in Brickell can be seen in the photos below. While not a registered historic landmark, Brickell is home to Tobacco Road, which claimed to be Miami's oldest bar, in business since 1912, [15] with a now-demolished building built in 1915.